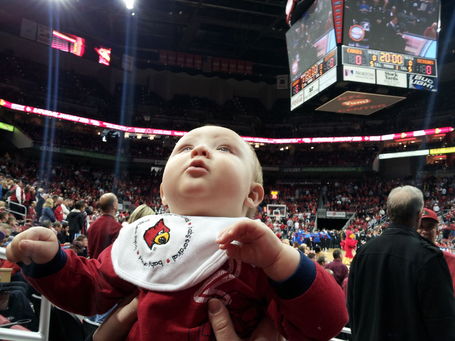 Joshua Helfrich dedicates this news and notes post to all the teachers that told him he'd never amount to nothin'. To all the people that lived above the buildings that he was hustlin' in front of that called the police on him when he was just tryin' to make some money to feed his daughters. And all the toddlers in the struggle. Know what I'm sayin'?

It's all good baby bay-bee.

Sports Illustrated's Luke Winn hands out coaching awards for the NCAA Tournament, and Rick Pitino claims 1/3 of them.

The Cardinals had a strong defensive rep coming into the Sweet 16, but no one expected them to hold Tom Izzo's Spartans to 0.728 PPP and just 44 points, the lowest scoring total by a No. 1 seed in the shot-clock era. According to NEM, Louisville allowed 42.4 fewer points per 100 possessions than a D-I average team would have in this game. Although Pitino alternated between zone and man-to-man during the tournament, it stuck almost exclusively to its matchup 2-3 against State, using it on 45 of 48 possessions, during which State shot just 22.2 percent, according to ESPN's research.

I was at this game in Phoenix, and the Spartans' frustration was palpable from press row, for a few reasons. Louisville's transition defense was excellent; watching it live as well as on film, you saw State's running opportunities get thwarted time and again by sprinting-back Cardinals. The Spartans were the nation's best rebounding team in 2011-12, but Louisville put such a huge emphasis on controlling the defensive glass that it held State's offensive rebounding percentage to just 22.2 -- 14.2 points below its average. Their active post defense kept Draymond Green from doing damage on the blocks, and center Gorgui Dieng was a dominant primary and help defender, blocking seven shots, which according to StatSheet, accounted for 25.0 percent of the two-point attempts taken while he was on the floor.

The Cardinals put on their signature press after most makes, but more in an effort to tire out the Spartans than create turnovers. Pitino opted against trying to create havoc with traps, instead focusing on playing stellar, one-shot-and-done half-court D in a low-possession game. It was a strategic masterpiece, especially given that it came against the sport's most renowned tournament game-planner.

Before looking at the numbers, I assumed this would go to Ohio's John Groce, who took the Bobcats to the Sweet 16 as a No. 13 seed. But this is based off of kenpom.com's pre-tournament Log5 analysis, which gave Ohio a 10.8 percent chance of reaching the Sweet 16, because it faced the least-efficient No. 4 seed (Michigan) and was paired with the least-efficient 5-12 game in the bracket (Temple-South Florida). The Bobcats' run was still quite an achievement, but according to Log5, the odds of Louisville reaching the Elite Eight (10.5 percent) and the Final Four (just 4.7 percent!) were even lower, so Pitino takes the award.

The game has simply passed him up and he's not having fun anymore.

So one way or another, it's a done deal that college football is getting a four-team playoff. If you're kissed by a stranger on the street who then walks away throwing confetti, there's a 23% chance it's me.

Some info. on Deion Branch's upcoming camp at PJCS: 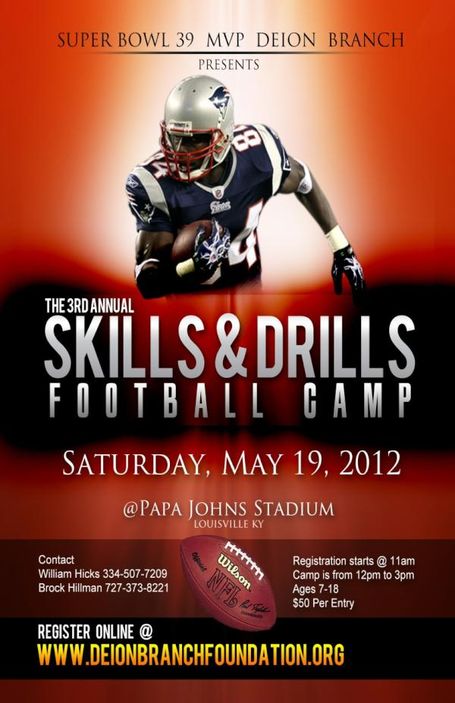 A great story from Jeff Goodman on how the new penalties for low APR ratings are resulting in players who want to transfer essentially being held hostage.

Former five-star linebacker recruit Jeff Luc has announced that he is transferring from Florida State and that Louisville is on his short list of schools. Many believe Luc will wind up at Kansas State, but he was high school teammates with Cardinal Deon Rogers. Also, we have Charlie Strong. 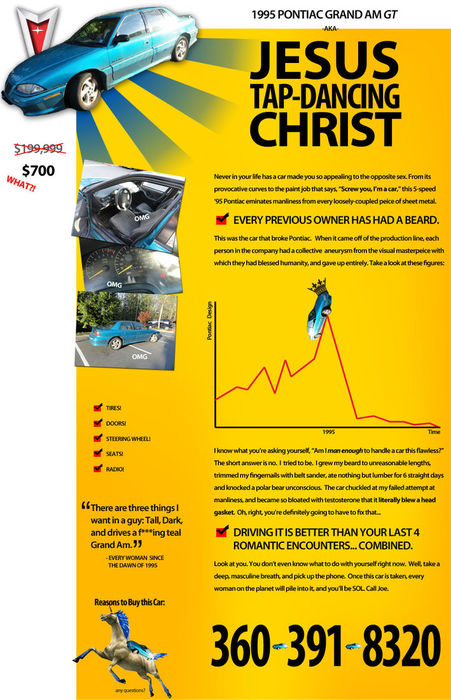 Gorgui and Russ like hats as much as I do. 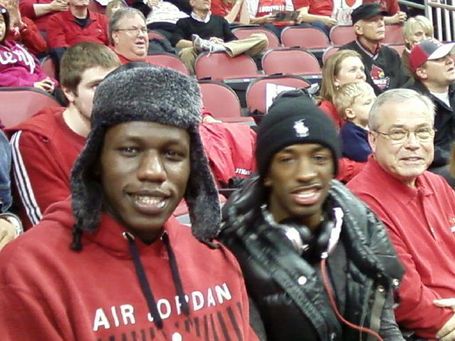 Mike DeCourcy says that "who makes shots for Louisville" is one of the five biggest questions of college basketball's offseason.

2. Who makes shots for Louisville?

The Cardinals' March run was sparked by point guard Peyton Siva (offense) and center Gorgui Dieng (defense), and their return has many projecting Louisville as a candidate for a Final Four return.

No doubt Louisville was terrific in the NCAAs, but the most prominent staple of coach Rick Pitino's offense generally has been the ability to score from long range. The Cards shot 27-of-70 from 3-point range in the tournament, or 38.6 percent. Senior wings Chris Smith and Kyle Kuric averaged a combined 13.6 points in those games.

Obviously, that second figure is fairly easily replaced. If sophomore Wayne Blackshear enjoys a healthy offseason, he could cover it himself. Kuric and Smith were reliable shooters, though, accounting for 61.4 percent of the team's made 3-pointers. Blackshear wasn't healthy long enough to demonstrate he can be that sort of player.

I've been catching some of the college episodes of Boy Meets World on MTV2 in the afternoons, and it's really driven home how pathetic the attempt to make Rachel a legitimate love interest was. The combination of sweet nd caring with an un-corruptible commitment to morality works when you look like Kelly Kapowski, not like a red-headed Dirk Nowitzki.

This phenomenon paired with Sean making the inexplicably instantaneous and complete transition from certifiable bad ass to total douche out of nowhere, Eric becoming a total caricature and Topanga packing on the pounds made the final seasons tough to stomach. Thank God Corey was a rock.

A bunch of people spent eight years at Bowman Field restoring this clock. That's like spending three days in deep thought just so you can remember the nightmare that kept you awake for three hours in the middle of the night. Thing is creepy.

A take on the expressions of Russ from BigTimeYurts.com: 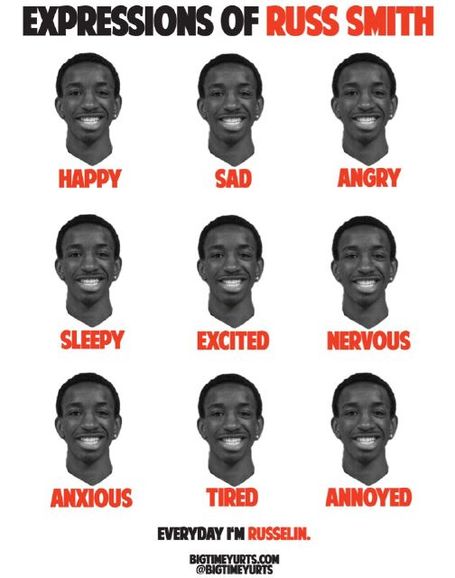 One of those players is 2013 big man Moses Kinglsey, who recently talked about (video) his recruitment with Jody Demling.

The only thing that sucks about the Lions making the payoffs for the first time in my adult life is that they won't have an exciting draft pick tonight. Really hoping for Philpott as the successor to Jason "The Franchise" Hanson.

Though a guy like Greg Scruggs might have an outside shot, it appears as if Josh Bellamy is the only Cardinal with a real chance of hearing his name called this weekend. And the odds on that happening aren't exactly great.

Best of luck to Josh and all the other Cards who will at least be looking to lock up free agent contracts.

A little wordy, but I'd buy this shirt:

And finally, your Louisville softball team is now a remarkable 44-2 after a late home run from Kristen Austin lifted the Cards to a 6-4 win over Indiana in Bloomington on Wednesday.