Share All sharing options for: Deion Branch Will Run For A Cause In Mini-Marathon With Sons

The Pats wide receiver entered in the 2012 Kentucky Derby Festival Mini-Marathon, which is being held this Saturday in Louisville. He will be pushing his son Deiondre. He'll have some help. Deiondre's twin brother Deionte will be pushing with dad.

Deiondre was diagnosed with viral meningitis at an early age. He wasn't supposed to make it past 6 months. He's now 11. He can't walk or talk (verbally), but he's full of life. He inspires his dad daily.

"He was given six months to live. He turned 11 last Tuesday. It's a blessing," Branch said earlier today. "For me to sit back and mope and complain about anything, that's not right when he can't get up and play with his brothers and sisters. But each and every day, he has a big smile on his face. And that's what's important. People always ask me how does it relate to football. Football is only going to last for so long. This is my son. I'm going to have him forever. That's what's most important."

A portion of the proceeds raised will go to Home of the Innocents, which serves children who require various levels of care. It's a place Deiondre spends a lot of time. So Branch and friends will be running for Deiondre.

"My wife has built this entire thing for us to raise funds for the Foundation so we can donate it to certain different organizations and everything," said Branch, who will be running for Team Branch. "We've raised about $27,000, and I'm going to match whatever the final number is. Then, we're going to donate most of the proceeds to different organizations. And I will be pushing my son, me and his twin brother, will be pushing my son 2 1/2 miles. So it's going to be a lot of fun."

Anyone who wants to donate to Deion's cause can go to: http://www.active.com/donate/TeamBranch. More information can be found at www.deionbranchfoundation.org. 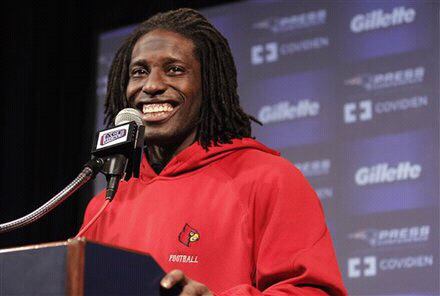 Just another example of why Branch continues to be one of the best ambassadors ever for Louisville sports.