Share All sharing options for: Louisville Throttles No. 1 Kentucky 10-2 To Sweep Season Series

The second Cardinal blowout in two weeks resulted in U of L's first two-game regular season sweep of its arch-rival since 1970. Coupled with Louisville's 12-0 win in Lexington on April 10, the Cards topped the Cats by a combined total of 22-2 in 2012, a remarkable accomplishment considering UK has yet to drop an SEC series.

"I don't know what's happening," Louisville outfielder Ty Young said. "We did just what we did last time. We got off to an early lead, and our pitching dominated." 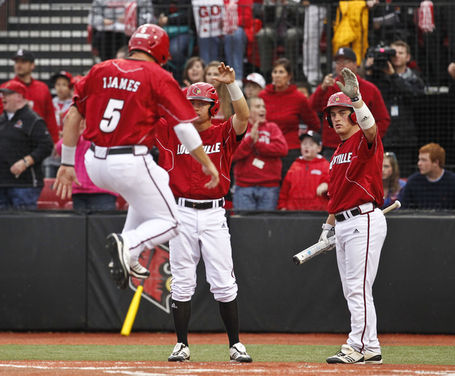 Three players had multiple hits for U of L, including Young, who drove in a pair of runs and scored three more himself.

The victory was large for Louisville in terms of morale, but did nothing to help the Cards with their ultimate goal of winning a Big East championship. With four weekend series remaining in league play, U of L currently sits one game behind a three-way tie atop first place.