Louisville Looks For Season Sweep Of No. 1 Kentucky

Share All sharing options for: Louisville Looks For Season Sweep Of No. 1 Kentucky

The 20th-ranked Louisville baseball team will look to sweep No. 1 Kentucky when the two face off at 6 p.m. tonight inside Jim Patterson Stadium. The Cardinals throttled their arch-rivals 12-0 in Lexington earlier this month. 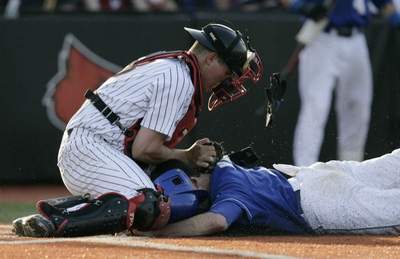 Here's the pertinent information from U of L:

Ticket Information
The Battle of the Bluegrass is a ticketed event. General admission tickets are available in the berm outfield seating area for $5 each and can be purchased at the gates. Chairback seats are sold out. Gates at Jim Patterson Stadium as well as the Jim Patterson Stadium Ticket Office will open two hours prior to first pitch at 4 p.m. ET.

Fans Should Wear Their Red
U of L fans are encouraged to join in a "Red Out" by wearing red Louisville gear to the ballpark. The game is also a T-Shirt Tuesday as the first 150 fans through the gates will receive a free red out t-shirt courtesy of Dr. Bizer's Vision World and hot dogs will be only $1 each for Buckhead Dollar Dog Day.

About the Matchup
Louisville is expected to start sophomore right-hander Chad Green (Effingham, Ill./Effingham HS) on the mound, while Kentucky will go with freshman lefty Sam Mahar. Green is 2-0 with a 1.99 ERA and 27 strikeouts in 22.2 innings pitched this season, while Mahar is 3-1 with a 1.71 ERA with 27 strikeouts in 26.1 innings. Tuesday will be the first start of the season for Green and just the second for Mahar. Overall, the Cardinals have a team ERA of 3.26 and 336 strikeouts, while the Wildcats have a 3.49 ERA and 335 strikeouts.