It started with a whisper. By which I mean, it started with a joke in a blog post: that in the off season, one way to cope would be to do a post listing in order the Top 153 Russ Smith Things that happened in the 2011-2012 season. But the more I thought about it, the more it made sense. While a list involving the best Gorgui things of 2011-2012 would just be "1. All of the Gorgui Things", a list of Russ Smith moments, quotes, factoids, GIFs, pictures, videos and plays could extend into the triple digits. Ranking them would be a TOTAL waste of time and would prove beyond a shadow of a doubt that the author needs a life. But an unranked crowdsourced list? Totally different.

So I'll get us started with some of the easy ones. And in the comments, if you want to add them and try to stay in some sort of numerical order, let's see how many we can get. Again, pictures, quotes, GIFs, photoshops, nicknames, stories, specific plays, anything that could possibly be counted as a "Russ Smith Thing" from this past season.

Note: the less words you use to explain it, the more of a Russ Smith Thing it is.

1. "Nice Pass, Russ." - probably my favorite of the whole season 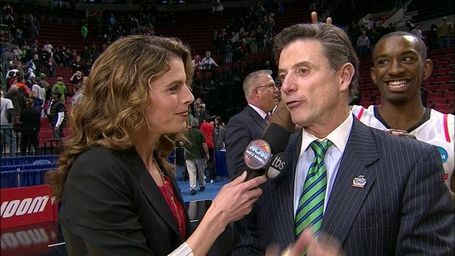 3. Remember that play where Russ Smith threw the ball away in the last few seconds of an Elite 8 game with us up 1 point and then the guy immediately walked, we got the ball back and Russ hit both free throws? That was pretty Russdiculous.

5. How his high school coach confirmed that he often didn't know the score, time on the clock, game situation, game importance, or much else about anything but scoring.