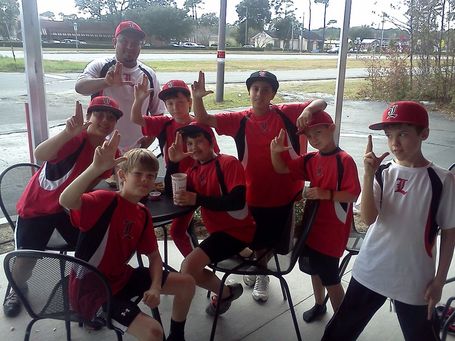 Hit it where they ain't, boys.

Programming note: Mark Ennis and I will be co-hosting "The Two Man Game" tonight from 8-10 p.m. on ESPN 680. You can catch the show in podcast form or streaming live on ESPNLouisville.com.

Dick Vitale has made it official with the release of his first preseason top 40. 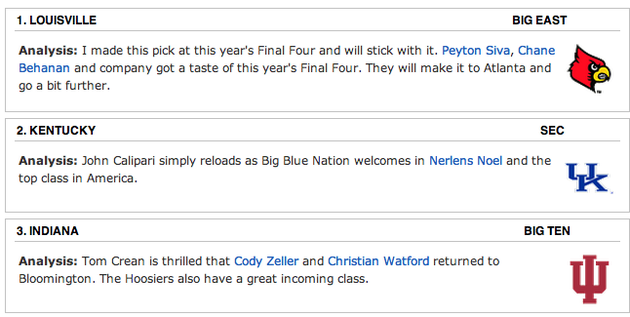 The most underrated aspect of the John L. to Arkansas story is that he's walking out on his alma mater, Weber State, for a 10-month contract. Smith signed a contract with WSU in Dec.

When Steve Kragthorpe heads to Weber is when I start getting suspicious.

Sports Illustrated's Luke Winn has Chane Behanan as the fifth-biggest impact sophomore returning for next season.

Staying Impact: The Cardinals are SI.com's No. 2 team in the preseason, in large part because their Behanan-Gorgui Dieng frontcourt is one of the best in the nation. Behanan started from Day 1, but didn't play his best basketball until the NCAA tournament, when he was named Most Outstanding Player of the West Regional after going for 15-and-9 against Michigan State and 17-and-7 against Florida. He looked to be on the verge of an All-Big East-level season as a sophomore. Fellow McDonald's All-American Wayne Blackshear, whose freshman year was plagued by injuries, could have a similar breakout while starting at small forward.

Had He Left: Behanan is so undersized for a power forward that he was never a real threat to declare for the draft, which is good for the 'Ville: he was their best rebounder on both ends, and that production would've been difficult to replace. The Cardinals roster has a few serviceable backup bigs in Stephan Van Treese (a 6-8 senior) and Zach Price (a 6-10 sophomore), but the one experienced fill-in for Behanan, Jared Swopshire (a 6-8 senior), opted to transfer to Northwestern as a graduate student.

Next Step: Free-throw accuracy should be Behanan's primary focus this offseason. He had the highest foul-drawing rate (48.3 free throws per 100 field-goal attempts) of any Cardinal, but shot the lowest percentage from the stripe (59.4 percent). He's their most effective scorer around the basket, making 56.0 percent of his two-point attempts, and has a nice mid-range jumper, but won't be a star until he gets more reliable from the line.

Winn also has Wayne Blackshear listed as one of the "five other sophomore returnees who could impact the '12-13 title race."

The hottest male athlete in the world officially signing with Pikeville: 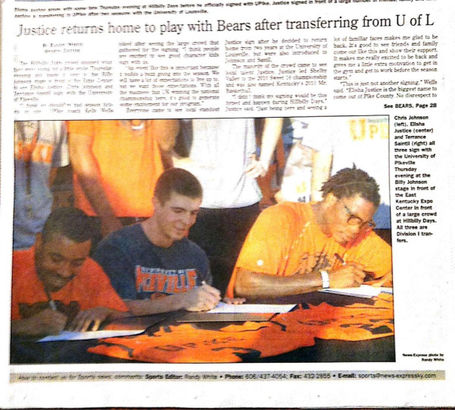 The Louisville softball team continued to build on its historic season by sweeping Seton Hall over the weekend to improve to 43-2 overall. The Cards are closing in on locking up a national seed for the NCAA Tournament, and being able to host a Regional and (potentially) a Super Regional.

My favorite Petrino-related item since the motorcycle GIF.

Congratulations to Bilal Powell and his wife Jessi on the birth of their first child, a boy.

Former Cardinal and New Orleans Saint Earl Heyman became the 2012 Heavyweight Golden Gloves Boxing Champion in the state of Indiana last Thursday. It appears his next move will be one into the professional ranks.

The Louisville Magic AAU team, led by U of L commit Quentin Snider and recruit D'Angelo Russell, made it to the semifinals of the Adidas VIP Exclusive Run before falling to Indiana Elite, 72-70 on Sunday. Rick Pitino was in Vegas to watch the pair, as well as recruit Jerrell Martin.

Louisville women's coach Jeff Walz will be hosting a pair of high-profile visitors this week.

Both the Louisville and Syracuse football programs are making significant plays to improve their facilities.

At Louisville, athletic department officials were recently authorized to start fundraising for a $7.5 million expansion of the football complex, next to the football stadium. Coach Charlie Strong has proposed an 18,000 square-foot addition to the complex, which opened in 1998.

Louisville will raise the money privately to finance more space for the training room and weight room, in addition to upgrades in other areas. State-of-the-art weight rooms have become essential in the world of college football today.

"What we're trying to do is upgrade," Strong said last week. "It's all about just making sure that you stay up to date, you keep moving with everyone else. When you bring in recruits, they look around. They don't know what they're looking for half the time, but it's all about where you're just staying to keep up with every other program."

Congrats to the U of L men's tennis team on winning its third straight Big East title over the weekend. Still want one of those sweater vests.

Swop wearing a No. 16 infra-red jersey shirt is more than a little fitting. 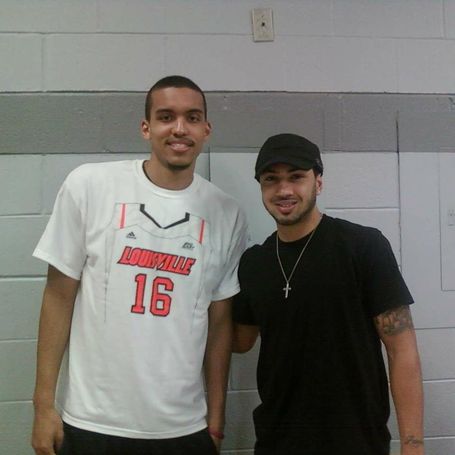 Well you came and you gave without takin'...

Speaking of which, July 27 plans have been made. Sorry, Mom. You'll have a birthday again in 2013.

Anthony Davis' behavior at a recent autograph session left a bad taste in the mouth of one Kentucky fan.

We went to see Davis today in Hazard. People stood in line in the cold rain for over 6 hours and didn't get his autograph. He refused to speak to any fan or look at them or shake their hand. Then he was there for only about an hour and he decides he doesn't want to do anymore so he gets up and leaves and doesn't even look up. There were MANY disappointed fans and children who were heartbroken that they didn't even have a chance to see him in real life. Miller and Kidd-Gilcbrist stayed, but only a third of the people there today got in and only a fraction got to see Davis. He used to be my favorite from this season but my opinion has changed drastically. It's obvious he didn't care about UK, the storied program, or the Big Blue Nation. The only thing he cared about was for Coach Cal to help him become a great player so he could leave after one year and make his millions. Kidd-Gilchrist and Miller today and Jones Thursday in Pikeville were so nice. I hope karma catches up to Davis!

You mean the Chicago native isn't thrilled about spending his last few weeks before becoming a millionaire signing autographs in Hazard, Ky? Shakes me to the core.

I didn't even read this, but the headline alone made it worth linking.

And finally, tomorrow's U of L/UK baseball showdown at Jim Patterson Stadium will be a Red Out. Here's everything else you need to know about the game.