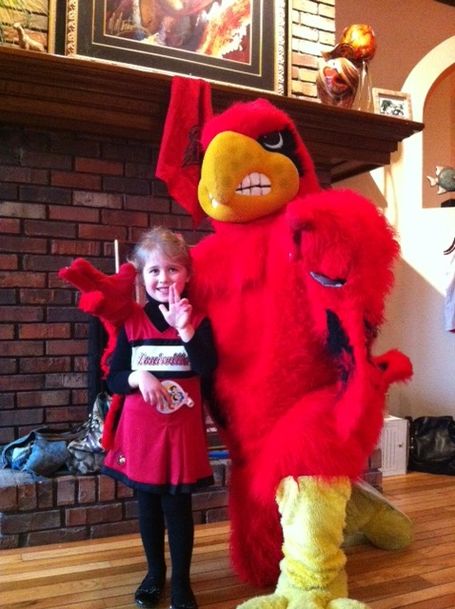 Michelle Graham earns serious Grandma of the Year points here for hiring Louie to make an appearance at this lucky little lady's fourth birthday party, which, obviously, was U of L-themed.

If she would have hired Air Louie, I would have turned her in for child abuse.

The 22nd-ranked Louisville baseball team absolutely pummeled Indiana 21-4 in Bloomington on Tuesday. Next up is a huge three-game set at league-leading South Florida.

My email was hacked for the second time in five months last night, so if you got something weird from me, yeah, I'm sorry, please disregard it. It has been a morning of incredible shame.

Who would have thought the impenetrable fortress that was AOL mail could ever be compromised?

Earl Clark recorded his first NBA double-double earlier this week, which you can see in the video below. Actually, even if you don't care at all about how E5 got to 14 and 11, the video is a must watch because of the postgame interview at the end.

Every now and then I forget just how cool that human being is.

All right, thanks man.

A solid slide show of images from Tuesday's celebration. 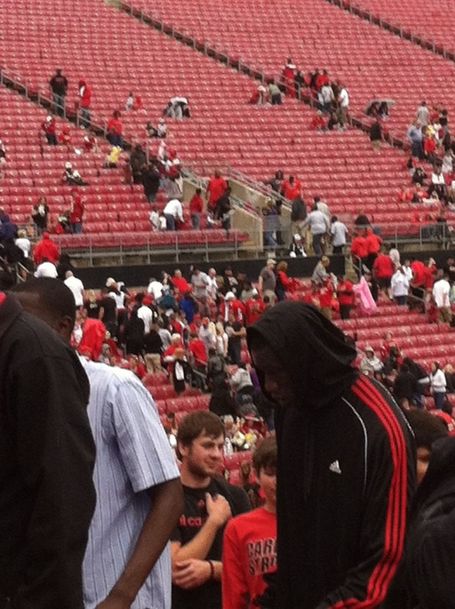 ESPN's Andrea Adelson discusses how Louisville is now carrying the weight of expectations for the first time in the Charlie Strong era.

Now, the script has been flipped. You can all but guarantee the Cardinals won't be found anywhere near the bottom of the Big East projections headed into 2012.

Indeed, Louisville leaves spring practice with a bit of extra baggage -- that of heightened expectations for a program that has not been to a BCS game since 2006.

"Now it's all about where are we going to take this team?" coach Charlie Strong said after the spring game wrapped this past weekend. "This could be a special group, but it's about work. A lot is going to be said about this team. A lot is going to be written about this team. Now, are we going to mature enough to handle all the writing out there, the publication of what is going to be said? Last year we were picked last, we end up in a three-way tie for first. This year, we're going to be picked first or second, so now we're going to see if we can work and then can we go play each week and be a consistent team every week? We'll see. We have a lot of work to do and we need to improve. We have to go get better."

For the rugby-loving 'Cloids out there, the Cardinals will be in action against Dayton at 1 p.m. on Saturday at Seneca Park.

ESPNU has released its new top 150 for the class of 2013, and the four letter network has U of L recruit James Quick as the No. 59 overall player in the class.

Cardinal commit Ryan White (Quick's teammate at Trinity) is listed as a four-star prospect, as is fellow commit Donel Elam. Lexington Catholic QB Kyle Bolin, another member of Strong's class, is graded as a three-star prospect.

Quick was one of the many recruits in attendance at Louisville's Spring Game on Saturday.

This gentleman is not an average Big Blue Nation lunatic, he is an actual photographer who was covering Tuesday night's press conference in Lexington. 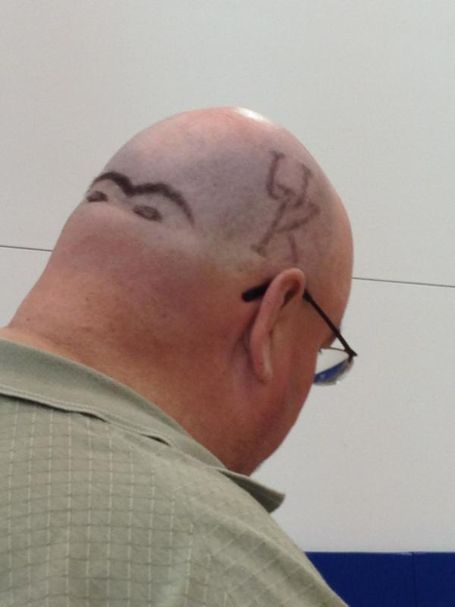 My guess is he was hoping for some cool "my picture is on UK websites" points, but that's just creepy and weird. You're paying homage to a high school senior and a college freshman with your head...at a press conference you're covering in a professional capacity.

I had a fairly (extremely) inappropriate joke originally typed out in this spot, but against my worse judgment I've now replaced it with this sentence. But because I'm still laughing at the joke while sitting in a room occupied solely by myself and a trusted canine companion, I feel it necessary to inform you that the joke, while unquestionably poor in taste, was indeed quite humorous. Don't be angry at me, be angry at the people who would have been angry at me.

On a similar note, local stations in Lexington actually utilized a scroll last week during during regular programming to inform viewers that Nerlens Noel had committed to Kentucky. 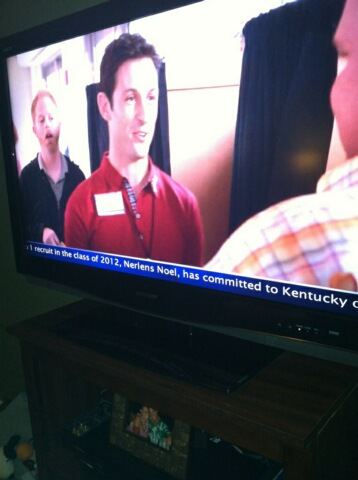 For those of you looking to expand your football horizons, here's a great post from Smart Football on "The Monster Defense," which Louisville has utilized fairly regularly under Vance Bedford.

A feature on the best returning underclassmen in college basketball, which many people have already pointed out should include no less than four Cardinals.

Texas A&M is making a bold statement with this fresh shirt: 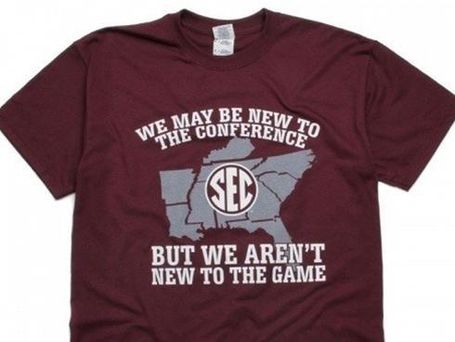 And apparently that bold statement is that there is at least one SEC team in the state of North Carolina, but none in Texas.

It couldn't have come at a worse time as for as the Courier-Journal's relationship with Louisville sports fans is concerned, but the local paper of record introduced Wesley Jackson as its new publisher on Tuesday. Jackson was the starting center for the Kentucky football team in the 1993 Peach Bowl.

I fully expect him to be succeeded by Russ Smith.

Bob Huggins, who has had infamous issues with alcohol in the past, was apparently bombed while giving a speech during a coaching clinic last Saturday afternoon.

Saw some great coaches at the Nike Clinic. Bob Knight was great, Billy D & Roy Williams were good. Bob Huggins was drunk during his session.

Bob Huggins is bombed presenting at the clinic...presenting!

Bob Huggins, you were entertaining to say the least. It wasn't obvious at all you were trashed. "Bad shot lead to bad passes!" #classic

And this was only a sampling.

It's easy to laugh at this, but it's also pretty apparent that Hugs might have a fairly serious problem here. Generally, a high-profile incident is enough to make a public figure curtail their drinking, especially in situations when they know they're going to have to be seen.

We've all had our issues with Huggins over the years, but you'd hate to see a second major incident result in his career being largely defined by something away from the basketball court.

I think if a hologram Mike Rutherford were created to serve any sort of purpose, I'd be extremely and overly judgmental of it/him. I'm not talking about the work of the designer or anything like that, I'm talking about the actual hologram itself and the way that it behaved or interacted (I'm aware that this would all be the product of the fictional architect).

Maybe this means I have unrealistically high standards, or maybe it just means I don't like myself enough. I'm not sold either way. I need to think about this more.

I just wouldn't want hologram Mike Rutherford to do something like, I don't know, wear bright-colored tennis shoes with jeans...and the thing is, for whatever reason, I really feel like he would. I'm not saying he would purposefully do this in some sort of "there's only room enough for one of us in this town" act of defiance, I just think it, or something analogous (maybe he says "YOLO" ironically), would somehow occur, and I would not be able to take it in stride. I'm not demanding identical mannerisms or anything like that, I just don't want him to come off as impossible to believe, or, even worse, a total assclown. I don't think that's an unreasonable fear.

I just can't see it going as smoothly as the Tupac thing...is all I'm trying to say. So that's out for Derby Eve.

John Calipari couldn't help but take a subtle jab at Rick Pitino on Tuesday, stating at the beginning of the press conference for his five underclassmen that: "Anybody that tells you in one or two years you cannot create a bond, they're crazy." This of course was in response to Pitino's previous statement that he couldn't imagine saying goodbye to a player he cared deeply about after just one year.

That statement by Calipari wasn't particularly surprising. This one, however, was: "Louisville will be preseason No. 1 and should be able to do what we did this year. They got NBA players, they're talented."

While I don't believe there's a semblance of genuineness behind those words, the statement is definitely...interesting?

In case you hadn't been privy to this brilliance yet:

Following a weekend in which she tossed a pair of no-hitters, U of L softball pitcher Tori Collins was named the Louisville Slugger Division I National Player of the Week on Tuesday. It's the first time a Cardinal pitcher has ever received the award, and just the second time any Louisville player has earned the honor.

And finally, a look at all the Cardinals who will head into camp on NFL rosters.