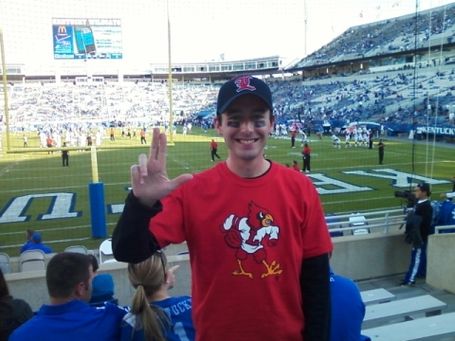 Erich Kline holding strong at Commonwealth last Sept. If anyone could remind how that game turned out, I'd greatly appreciate it. For whatever reason I seem to be blanking at the moment.

Quick programming note: I'll be on the radio with Mark Ennis tonight from 7-9 on ESPN 680 and ESPNLouisville.com. Listen as I get emotional before Elisha Justice is even brought up.

A reminder that the celebration for the 2011-12 Louisville Cardinals basketball team will be taking place on Fourth Street Live tomorrow beginning at 5:30 p.m. 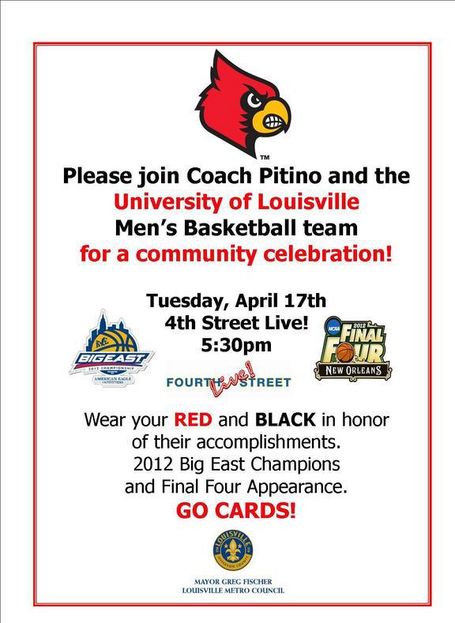 I'm just going to go ahead and say what each one of us is thinking: I want The Russ Dance.

Brian Weinberg of Salon.com has a really interesting piece about his experience with the sports media during Final Four weekend. Matt Jones of Kentucky Sports Radio features heavily in the story, but shockingly there are zero (ZERO) mentions of CardsFan922. I can only assume Mr. Weinberg is now looking for a new employer.

Also, Seth Davis is pretty much exactly how each one of us envisioned him.

We're discussing his journalism background - Davis started in print - when two teenage girls come around the corner. "Hey gorgeous, times two," he intones flirtatiously, and the girls literally simper. I assume they're CBS interns, or perhaps daughters of a coach; they're so young, it's innocuous and charming. He returns to talking about the competitive nature of sports journalists.

"I was having a conversation about this with Chuck Todd [chief White House correspondent and political director of NBC News]. My sense is there's more competition in sports to be first. Everybody's trying to get noticed. One way to do that is get the scoop, another is being as loud and obnoxious and mean as you can. How incendiary can you be?"

"Just as in politics," I say, wondering if he counts Doyel as incendiary.

"It's a very true parallel. You gotta go to the polarized extreme. I think people like to be provoked. There's a lot of trash-talking in sports, but in politics, I think there's genuine demonizing. Hey there, hot lady ..."

It's CBS courtside reporter Lesley Visser, whose face has fewer wrinkles than her sideline reporters 30 years her junior. "Can I borrow him for a second?" she asks, giggly to see Davis.

Visser's been a pioneer for women in sports journalism, the first female NFL analyst on TV, and the only sportscaster in history, male or female, to have worked on broadcast crews for all of the following: the Final Four, NBA Finals, World Series, Triple Crown, Olympics, Super Bowl, World Figure Skating Championships and U.S. Open. Yet as she and Davis chat, she keeps grabbing his arm and touching her hair, like a teenage girl.

"Tomorrow's a long day," Davis tells me before being whisked away in a golf cart, young and forever male. "Production meeting, rehearsal, the pre-game show, the games, the post-game show. And I'm doing some corporate work for Subway. A little lettuce on the side," he says, winking.

The Louisville softball team swept a three-game weekend set with Longwood (heh) in style, as senior hurler Tori Collins tossed two no-hitters in as many days. The Cardinals are now a sparkling 38-2.

The Louisville baseball team continued its perennial struggles with Seton Hall, dropping two of three games to the visiting Pirates over the weekend. The Cards (25-11, 8-4) will travel to Indiana on Tuesday before a weekend series at South Florida.

Alex Kupper suffered a sprained MCL during Saturday's Spring Game, but should only be sidelined for about three weeks.

The news is markedly worse for junior reserve center Chris Walker, who tore his left MCL and ACL during last Friday's practice and will miss the entire 2012 season.

Erich's picture reminded me that I needed to give a belated rest in peace to one of my favorite friends' dogs, Chloe Weber.

We co-hosted the CC game-watch party for this past season's Battle for the Commonwealth against Kentucky, and she (along with the Art Carmody jersey, of course) deserves at least some of the credit for the victory and subsequent postgame celebration. 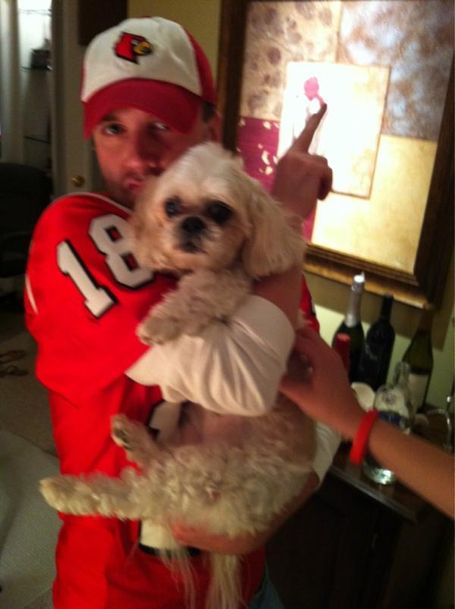 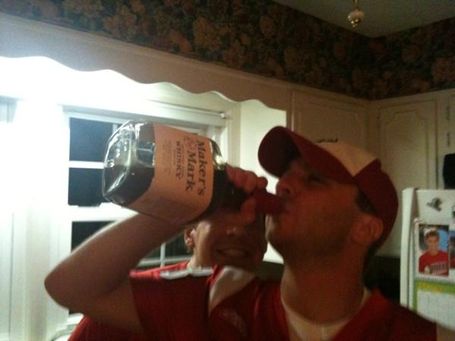 Probably had been drinking. Not definitely, though. You'll never get a definitely out of me.

Ok, definitely had been drinking.

Rick Pitino and Kenny Perry performed quite admirably together at a Pro-Am in Florida over the weekend. 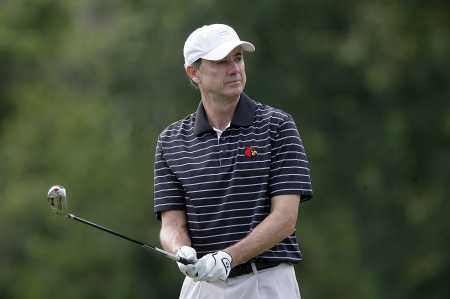 You know Nick Faldo and I won this thing last year, and I'd like to win it again this year.

Scott Radcliff took to the podium this afternoon after Pitino and Luke Hancock, and talked about the spring game as well as expectations heading into fall camp. He said that Teddy Bridgewater's maturation had been great to watch, that Bridgewater and Stein are great friends who push each other unbelievably hard in practice, and that DeVante Parker has the potential to be out-of-this-world good.

I hate looking ahead, but it's hard not to get extremely excited when thinking about what the potential that next year's athletic season holds. 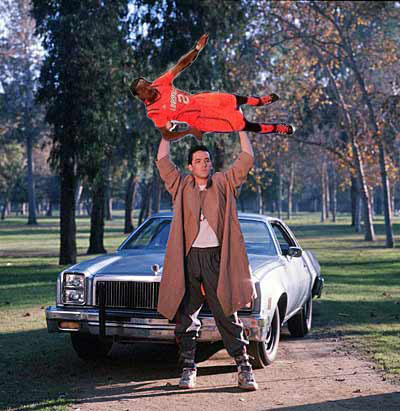 Love the fact that Luke Hancock's poised and mature press conference candor can say "veteran co-captain," while his earrings can scream "party" at the same time. We've seen that same type of versatility from Luke throughout his brief tenure at U of L. Not everyone can shoot the three AND create ways to score in the paint, just like not everyone can rock a polo with sweatpants.

Excited to see everything this guy brings to the table over the next year...on and off the court.

Congratulations to the Louisville rugby team, which drilled Kentucky 46-0 on Saturday to keep the Henry Clay Cup in the Derby City.

I'm just gonna go ahead and address this straight on: I've received a suspiciously high number of emails, tweets and Facebook messages in recent weeks from people saying their moms want to meet me. I'm not sure what the purpose of these proposed meetings would be...but I'm....well, I'm suspicious.

Maybe they want to lecture me about something, or maybe I've just been giving off a mom vibe recently. I don't know, I can't control these things. A few people did refer to me as "bitch magnet" in college, but that was only because I was constantly crying and hanging out by the refrigerator.

I'm not sure what the solution is here, but just know that I'm...well, again, I'm suspicious.

It's been posted everywhere but here... 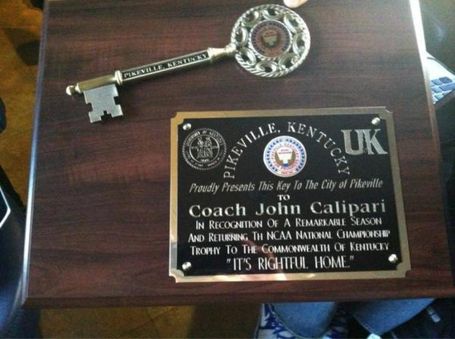 Sometimes stereotypes exist for a reason.

Here are the posters that will be given away at tomorrow's celebration: 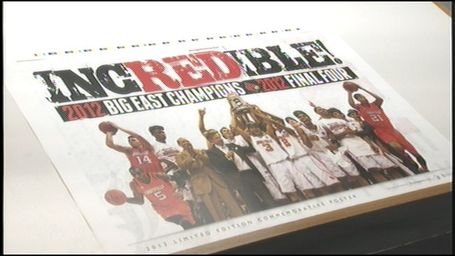 Could have probably figured out some way to get that shot of me and Chloe in there, but whatever, I'm not going to complain. We'll just save that shot for the "Mike's Louisville" banner that will be hung on the side of Andy's TV.

Here's the official release on Siva and Hancock being named co-captains for next season.

And finally, Louisville has opened in Vegas as the third choice to win next year's national championship at 10:1. Kentucky and Indiana are your co-favorites at 7:1.