1. There was no "official" attendance number recorded, although U of L went with 15,000, which seems about right.

I have to admit that the tally is a bit disappointing, even with the rain in the early part of the morning. With a potential top 25 team, perhaps the most exciting starting quarterback in the history of Louisville football and the fact that the game was free, I figured Cardinal fans would at least meet Charlie Strong's goal of 20,000. It seemed promising given the number of people who were tailgating around 11 a.m., but I suppose the late-arrivals weren't as strong in numbers as I assumed they'd be.

It wasn't an embarrassing showing, by any means, but it also wasn't the statement that the fans were taking their game "to the next level" like Strong and company had been hoping for. 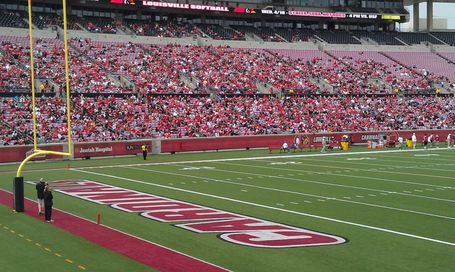 Louisville fans complained incessantly during the Kragthorpe era about "deserving better." Strong's staff and his players have done an incredible turn-around job in just two seasons, and the time has come for the fans to follow suit. Saturday was not a tremendous start.

When you don't do things like meet relatively modest attendance goals laid out by your head coach, you sort of surrender the right to bitch when said coach eventually leaves for a higher-profile job.

2. Teddy was tremendous, connecting on 19-of-21 passes for 257 yards and three scores. That's right, more touchdowns than incompletions...and one of those was the product of him throwing the ball way.

The performance was even more impressive when juxtaposed with how he looked a year ago. Freshman Teddy showed brief flashes of brilliance, but more than anything confirmed the notion that Will Stein had to begin the 2011 season as starting quarterback.

Granted it was a situation where he knew he couldn't be hit, but Teddy looked like a guy on the verge of making that next leap towards superstar status. He also continued to look really cool when making checks at the line, which I will continue to enjoy for another season.

I think we all knew we were getting a remarkable talent when Bridgewater committed two Decembers ago. What we didn't know about was the extraordinary poise, maturity and work ethic that this guy has. You never know how things like this are going to play out, but at the moment Teddy Bridgewater was on track to become the next big Louisville athletics superstar.

3. The team came out to the "Get on the Train" video that U of L had used as a promo for the game, and I thought it actually worked really well. It might need a little tweaking before it's ready to be used for the actual season, but it was already better and more likely to create pregame excitement than the horse-racing theme they've used for the past two years.

4. Without question, running back will be the position to focus on during fall camp. Louisville has four backs that appear almost interchangeable at the moment, but at some point you're probably going to see two step up and receive the lion's share of carries.

Much was made from members of the media who took in practice about Dominique Brown's new size and agility, but on Saturday he pretty much looked like the player we saw a season ago, which isn't really a knock. He didn't receive a carry, which was perplexing, but he did make a nice spin move to avoid a tackle and get into the endzone on an 18-yard strike from Teddy.

After the game, Strong said Senorise Perry probably had the best spring of the four backs. The junior, who was sensational on special teams last year (and who only makes big plays), didn't have a chance to make a major impact either, carrying six times for 18 yards.

I still think it's Jeremy Wright who possesses the most superstar potential in the group, but he also showcased what slowed him down during his sophomore season when he coughed the ball up in the first half. In a lot of respects, Wright's career to this point has mirrored Bilal Powell's. He played behind a pair of veterans as a freshman, but starred when he got his chance late in the season. That created high expectations for his sophomore season, which were not met in large part because of a difficulty holding onto the ball. Here's hoping he does what Powell was able to eventually do, except a year earlier.

Corvin Lamb received more touches than anyone in the backfield, carrying seven times for 23 yards and catching two passes for 17 more. His speed will demand playing time, and I think the fact that he'll be able to focus on a single position for this first time in his Cardinal career will also really help him out. There's been a lot of talk and mystery surrounding Lamb since before he even arrived at U of L, and now he's finally settled and has a great opportunity to show the world what he's got.

Lamb said after the game that all the running backs expect two 1,000-yard rushers to come out of the group this season. While that might be a tad ambitious, I do think it's safe to say that this is the deepest U of L has been at the position since at least the 2006 season, when Kolby Smith, George Stripling and Anthony Allen were able to help the Cards win the Orange Bowl after Michael Bush went down for the year in the season-opener.

5. Maybe the most remarkable thing about the dramatic shift that has taken place under Strong is just how big Louisville looks up front on both sides of the ball.

Even when the program was thriving under Bobby Petrino, the Cards' O-line and front seven on defense still seemed undersized for major college football standards. It's not like that anymore. There are some very, very big boys who will be wearing the red, white and black this fall.

6. Saturday didn't give a whole lot of insight into who Louisville's kicker in 2012 will ultimately be.

John Wallace made the only field goal of the game, and it was a 52-yarder, but he also misfired on a 30-yard attempt. He, Matt Nakatani, Andrew Fletcher and Mitchell Nelson all converted on extra point attempts.

Bushell is one of the most talented pure corners that I've seen at Louisville, and there's no excuse for him not to have a monster senior season and then hear his name called during the NFL Draft two summers from now. Charlie Strong has talked multiple times about how Adrian can be as good as he wants to be, and you just have to hope that message fully registers at some point. I'm not sure what he did, but there was one instance where Strong stood over him as he did punishment pushups for some transgression.

We saw it last year where Bushell would have a big game and then not play very much (or at all, in the case of the UNC game) the next week because of an attitude issue. He knows he's talented, but the consistent word from out of the Trager Center is that he has no idea just how good he could be if he devotes himself completely to the game and the philosophy Strong preaches. With Louisville planning to blitz as much as it has the past two years, he'll have ample opportunity to make a name for himself on the national stage this year.

8. If the unspeakable happened and Teddy Bridgewater went down early in the year, Louisville could still win the Big East with Will Stein.

Stein also looked extremely improved from the 2011 Spring Game, especially when he was running with the first (Red) team. Overall, he finished the afternoon 17-of-26 for 178 yards and a score. With the first team he was 7-for-8 for 78 and the TD.

Shawn Watson talked after the game about how Stein is the type of person you want to coach on the football field and have as your son-in-law off it. He said he comes into practice every day with the mindset that he's going to unseat Teddy Bridgewater, and that both he and Teddy have improved tremendously since last season because of that.

There's no way of knowing how much Louisville is going to need Will Stein on the field this season, but it's already pretty clear how valuable he is to both this team and to the overall progression of the program.

9. Calvin Pryor is still bringing the wood from the secondary.

Dude loves to hit. I enjoy watching it.

10. Scott Radcliff had an enormous day.

They say he never drops a ball in practice, and it showed on Saturday as the senior - who earned a scholarship in the offseason - hauled in a team-high nine passes for 119 yards. In the same way that Louisville needs DeVante Parker to step up and be the unit's gamebreaker threat, you'd love to see Radcliff emerge as the guy who constantly gets it done on third and medium.

Watson said after the game that Radcliff's work ethic has made all the receivers better, and that "every football team needs a Scott Radcliff." Teddy also talked about how reliable Radcliff has been since his first practice, and how that reliability has led him to look for him whenever he's on the field. Despite a fairly deep WR corps, the former walk-on should step into a bigger role in his final season at U of L.

BONUS THOUGHT: This season is going to be the most fun we've had (as football fans) in a long time.