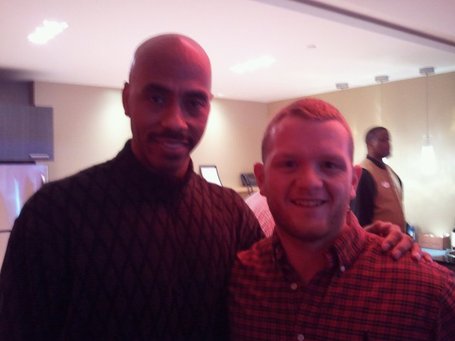 Chris Meyer hanging with the Doctor himself after the Miracle on Main in early 2011.

Don't look at him directly in the eyes for too long, lest you want to become accidentally oversexed. I'm talking about Chris, of course.

Programming note: because of baseball Tuesday night, "The Two Man Game" will be on the air this evening from 7-9. As always, you can listen on ESPN 680 or live on ESPNLouisville.com. Also, podcasts are now available on the SPN site, so you can listen to the show whenever you want. I recommend while flying, but that's just a suggestion.

So Kentucky didn't land Shabazz Muhammad but they did get Nerlens Noel, likely locking up the No. 1 recruiting class for a fourth straight year and the most annoying fan meme over the same span.

It's hard to make flat tops uncool, but Kentucky fans are already succeeding. Although the irony of folks who toss around racial slurs the way Bobby Petrino tosses around motorcycle rides sporting Kid n Play haircuts will be enjoyable.

Speaking of Petrino, his house (which, also ironically, is located on "Bridgewater Lane") in Arkansas is already on the market, and you can take a virtual tour of it right here. Some cool Louisville memorabilia is featured on the interior shots.

The U of L rugby team will be talking on Kentucky Saturday at 1 p.m. at Cherokee Park. Not an ideal slot considering the Spring Game is scheduled to kickoff at the same time, but if you can't make it out to PJCS, head on over and support the fellas.

Ashley Judd thinks hell is full of Louisville fans. It's funny because I always assumed hell was full of incredibly wealthy people who compare themselves to the homeless when they feel sad.

"And those behaviors were killing me spiritually, the same as someone who is sitting on a corner with a bottle in a brown paper bag."

"When (the counselors) approached me about treatment, they said, `No one ever does an intervention on people like you. You look too good; you're too smart and together."

I'll take my chances and continue to support the Cards.

My grandmother informed my mom the other day that she'd overheard the workers laying brick outside her house talking about Card Chronicle, and that this led to her interjecting and sparked a lengthy conversation. My grandmother once attended a Little League game of mine and asked if we drew straws to determine who got to bat next.

I would pay an excessive amount of money to have a full recording of said conversation outside CC Mimi Headquarters.

Spring Game preview from U of L.

Somehow this classic Russ Face from the post-Florida celebration made it past me. 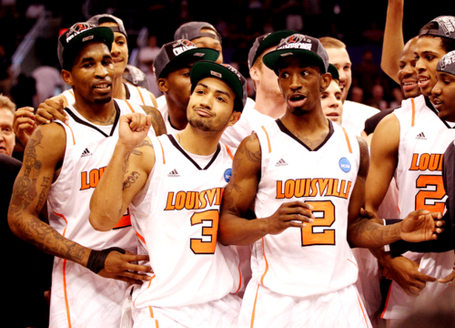 I already miss them all so much.

Kyle Kuric will play his first game in the Portsmouth Invitational Tournament tonight at 9 p.m. You'll be able to see the stats from the game right here.

Stephan Van Treese received word today that he has been cleared to return to conditioning. The junior played in just three games last season after experiencing pain from a patella tear he suffered last summer.

It'll be interesting to see if SVT gets the Goode/Swop treatment as far as a medical redshirt goes after next season.

ESPNHS: How’s the offseason going so far? Bolin: Everything’s going great. I got my recruiting process out of the way, and now everything’s been a lot less hectic. I’m focusing on just getting better, I’m working hard in the weight room and I’ve been out throwing routes to receivers. We’re trying to make a run for state this fall, and we think we have the talent to get it done. ESPNHS: You mentioned getting the recruiting process "out of the way." Are you relieved it’s over? Bolin: The process was great, don’t get me wrong. But yeah, it’s nice to get it out of the way. It starts getting pretty hectic. I was trying to find the place that best fits my potential, and I found that in Louisville. I went to campus a couple times, and I just fell in love with the place. The coaching staff was great, and I’m looking forward to working with them. I just can’t wait. That was the place I wanted to be.

Card Chronicle's booster roster just took a pretty massive hit. Any and all donations will be welcomed with open arms.

U of L is hiking tuition once again. But don't worry kids, it's not until you're still writing hefty checks years later wondering what the degree actually did for you that the real bitterness sets in. Throw in a year of post-grad education that did more harm than good, and the first of the month consistently starts to drive you into the always open arms of booze and Portlandia on Netflix.

Between this and the cocaine/prostitution ring getting busted...let's just say this has not been a good day for our financial backing.

Yeah, I didn't do very well in law school. Booze and Portlandia.

ESPN's Andy Katz has updated his early Top 25 and still has Louisville at No. 2, behind only Indiana.

Louisville didn't have to deal with any draft issues. The Cardinals are as untouched now as they were in New Orleans after losing in the national semifinal to Kentucky. The losses of Kyle Kuric and Chris Smith can't be dismissed, but everyone else returns, Wayne Blackshear will be around for a whole season, Mike Marra and (perhaps) Rakeem Buckles will return from injury, double-digit scorer Luke Hancock arrives from George Mason and Peyton Siva should be the preseason Big East player of the year. No reason the Cards can't make it back-to-back trips to the Final Four.

And finally, I'm told the Louisville cheerleaders and Ladybirds are performing quite well at the national competition currently taking place in Daytona.

I'll say it: favorite Ladybird team of all-time. Don't care if they fail to win the program's 81st straight national championship. We'll make them some sort of trophy. Will it be creepy? I mean, probably. That sort of comes with the territory.