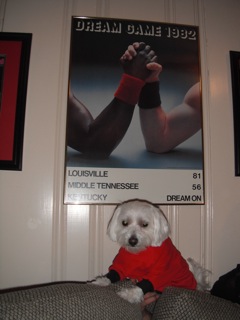 Rocky Bensinger posing in his Cardinal finest, and a cool story on the poster behind him from his owner, Charlie:

A printing company in Louisville anticipating that neither UofL nor UK would be upset (read choke) printed several thousand of these posters planning on adding the score and having them for sale the morning after the game. But when Middle upset UK (read choke) they were stuck with them. They tossed all but a couple of hundred which they printed as you can see behind Rocky. I had a friend who worked there and he delivered one to me. In all these years I have never seen another.

MTSU seems like kind of an innocent bystander in that poster, but still, very cool.

Congrats to the Louisville baseball team on its 12-0 stomping of No. 1 Kentucky Tuesday night. There was a post on the game set to go for this morning, but apparently not only was it not published here, it was sent out into the ether making it irretrievable. Awesome.

Anyway, here's the long and short on last night's game:

--The Cards belted out a season-high 17 hits while limiting Kentucky to just four.

--The victory was the largest in series history.

--Freshman righty Jordan Ruxer retired 18 of 22 batters as his season ERA dipped to 1.98. The kid is not your average mid-week starter and he's going to be an enormous asset for this club once the postseason rolls around.

--Center fielder Adam Engel made a tremendous home run-robbing grab in the second inning, and landed at No. 2 on last night's SportsCenter "top plays."

--It was the most runs Kentucky (30-4) has surrendered all season and the first time the Wildcats had been shutout.

--Last night also marked the first Louisville shutout of Kentucky in Lexington since 1934.

--Ty Young belted his fourth home run of the season. 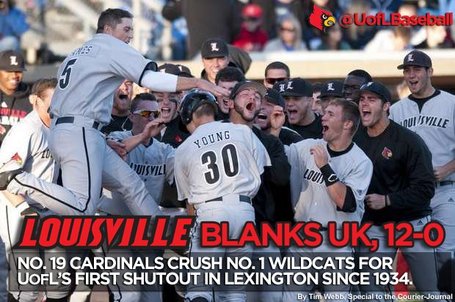 If you haven't been able to get yourself excited aout football in April yet, the time has come to change that.

Russ Smith back in class on his first day back from New Orleans: 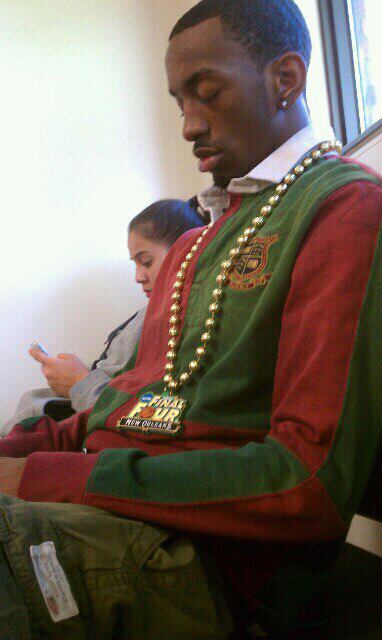 Love that, 1) he's wearing his Final Four beads; 2) he says he was mad at Shoni Schimmel for not waking him up.

Press conference self-slapping and motorcycle crashes with mistresses; the grass isn't always greener, Charlie. You've got a great thing here. You can be king.

I was extremely disappointed that I couldn't be here for Chicken's triumphant debut in The Ville, but I was thrilled to hear that he performed so admirably. Also, major thanks to the many who showed him so much love. He's a great kid and he's going to do some big things at Houston. 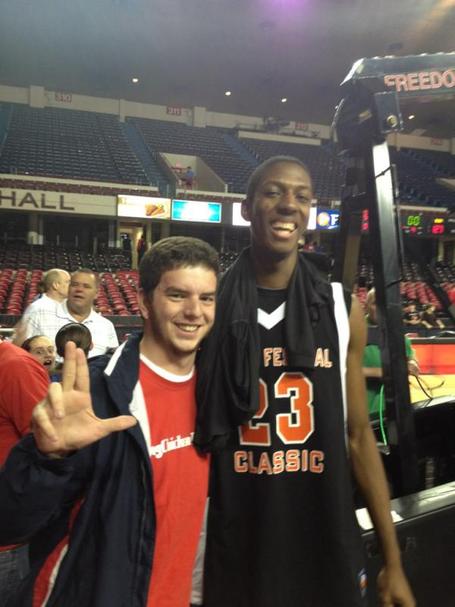 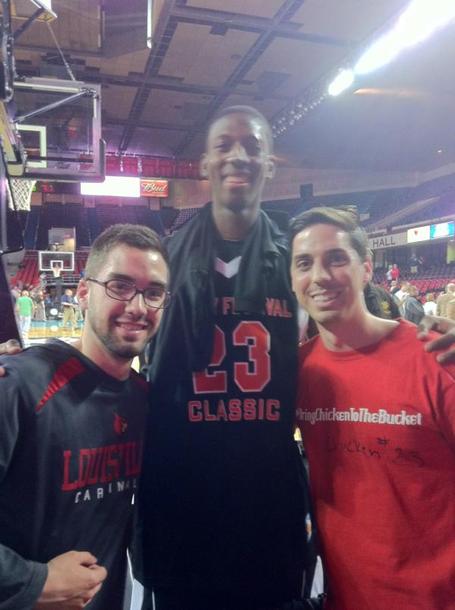 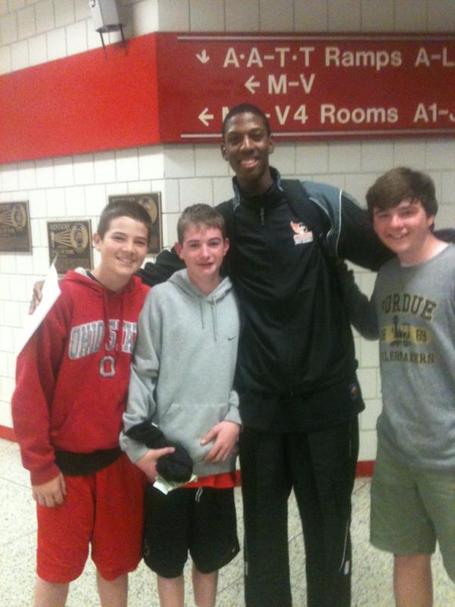 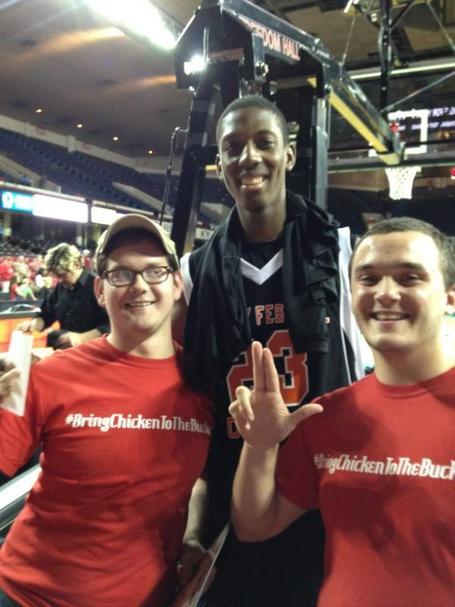 Also, if you're planning a trip to the Bahamas, here's a tip: Chicken's name is basically gold down there. I dropped it on one of our hostesses during our first night out and pretty soon they were all talking about him. Then one of my friends claimed he was a coach at Houston and the whole thing kind of got ruined. The moral of the story is to never have friends.

On the heels of a pair of strong all-star game performances, Louisville signee Terry Rozier has moved up to become a four-star prospect and the No. 12 point guard in the class of 2012, according to Rivals.com. He also jumped over 30 spots in the site's top 150 individual rankings.

This can't be a bad sign regarding the recruitment of Trinity star James Quick: 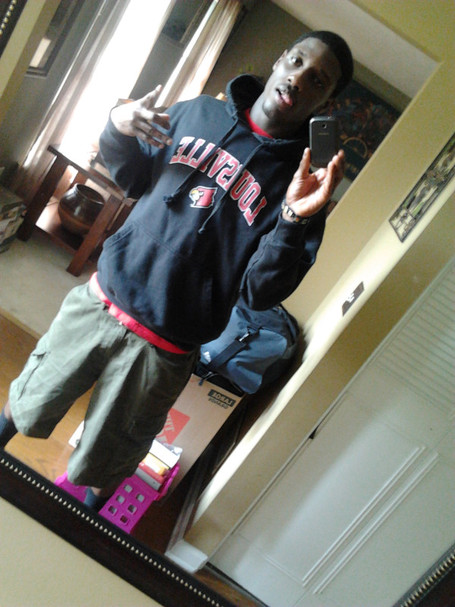 Jon Rothstein of CBS also likes Louisville to start out next season as the No. 1 team in the nation.

The Louisville softball team came from behind this afternoon to knock off Villanova 8-4 and improve their overall record to 35-2 and their Big East mark to 9-2. Following the ladies on ESPN would definitely be some solid early summer fun.

The readjustment to a society where it's not socially acceptable or legally permissible to drink freely and openly in public has been a difficult one. But just like Lucas in Lucas, I solider on.

Wayne Blackshear's teammates are now officially (and affectionately) referring to him as "Fat Ass Wayne" on a consistent basis. 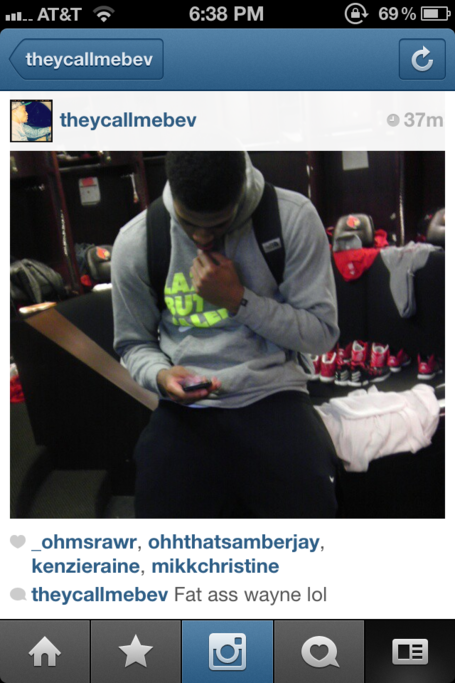 If he slumps next year because of self-esteem issues, I'm 100% throwing one of you (thinking guyngreen) under the bus.

The Kentucky football team has been breaking its huddle with "1, 2, 3, beat Louisville" for the duration of spring practice. Good luck with all that.

Offensive lineman Jake Smith and wide receiver Jarrett Davis (who has reportedly been having a big spring) talk after Tuesday's practice.

Charlie Strong will be holding a press conference tomorrow in anticipation of Saturday's spring game. Given the recent kerfuffle over local media access, it should be worth keeping an eye or an ear (whichever one you have free) out for.

The must-have shirt of the summer: 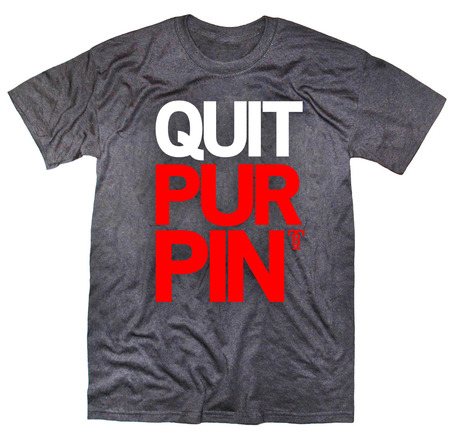 According to BizJournals.com, the city of Louisville again dominated the rest of the country in terms of NCAA Tournament television ratings.

The top ten markets for the tournament:

And finally, congrats to Kyle Kuric, who is one of 64 players invited to participate in the Portsmouth Invitational Tournament, where he'll be able to show what he can do in front of a hoard of NBA scouts. Bellarmine star Braydon Hobbs is also among those invited.