My father and I have made it something of a tradition to come up from Baltimore for the Big East Tournament each year. It happened to fall on my spring break for most of the years I was in college and we have just continued the tradition since. There, as usual, has been a fantastic batch of games since I arrived on Wednesday morning. I’m gong to try my best and give you all a running diary of what’s happened since we arrived.

7:45- Boarded the Mega Bus in Baltimore. Conveniently enough, there was a screaming baby right behind us and another lady who found it necessary to put all of her bags in an older women’s way and they argued for a good 15 minutes. We were about three minutes into our three-hour drive when my dad decided we would take the train next time.

11:40- We arrived at the freshly renovated Madison Square Garden. First of all, if you have never been to the garden, do whatever it is you have to do to come to an event there. You can just feel the aura and the history as you walk in, and there is no cooler setting than having the passionate fans of 16 teams around (maybe 15 I don’t think I have seen a DePaul fan in the five years I’ve been to this event).

After getting delicious pastrami on rye from the Gardens Carnegie Deli, we headed into our seats and got ready to watch West Virginia and UConn kick off the day. 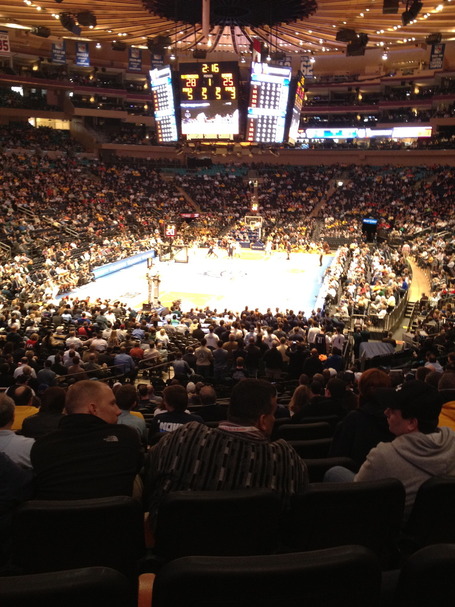 This was easily the best game I have ever seen that had the least amount of clutch. West Virginia completely blew the game and UConn simply didn’t appear to want to put them away once they took the control. That said, Jim Calhoun has clearly revitalized this team and Shabazz Napier and Jeremy Lamb were absolutely fantastic in this game.

3:15- After a much-delayed tip because of the length of the first game, Georgetown and Pitt got started. This game was rather boring from the start. I don’t quite know what it is about this Georgetown team, but they bore me. I found myself struggling to pay attention from the get go, partly because I was exhausted and partly because it was simply not an exciting game.

We wound up leaving at halftime to have some time to relax prior to the evening session. That decision looked better and better as Pitt reverted to its regular season self late in the first half.

5:15- We left the Hotel and headed over to this bar called Stout, which is located a few blocks from the garden.

On the walk over, we passed a bunch of West Virginia fans outside of a hotel smoking cigars and out walked Kevin Jones with an extremely attractive woman. One can only assume she was there to cheer him up. 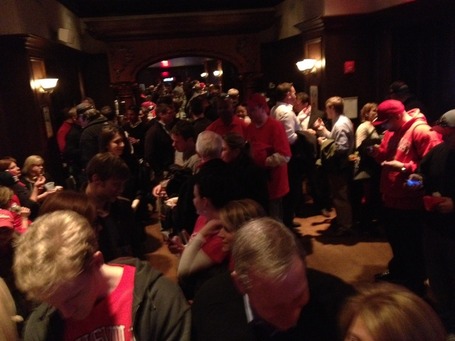 Once we arrived at Stout, we were directed to the back of the bar where the Louisville Alumni Association had rented out it’s own room. They did this last year as well, but I forgot truly how awesome it was. It’s certainly not by accident, but to walk in and see Darrel Griffith and Denny Crum sitting at a table right in front is pretty awesome.

Unfortunately the quality isn’t very good, but Griff was Chron’d at Stout. This will go down in history. 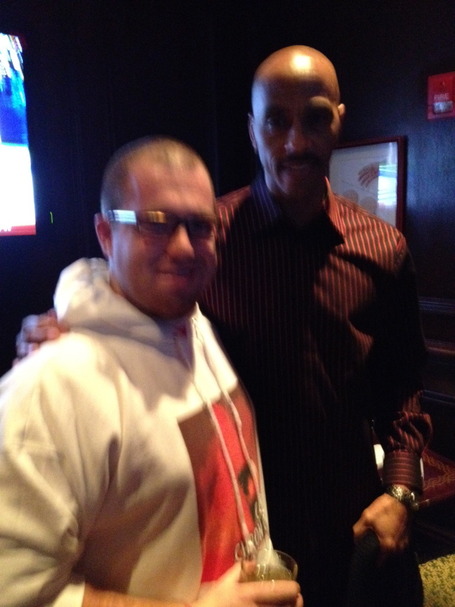 They had some free food being passed around, but certainly couldn’t afford to give our fan base free drinks. That just wouldn’t end well for either party.

We had a great turnout leading up to the game with around 350 people there and it’s always cool to have a large gathering of Louisville fans, even if you don’t know any of them.

6:40- We headed into the Garden and on our way to our seats, we passed an obviously amicable Tom Jurich, as he was play boxing with whoever he was talking to. Way to get after it Tommy. 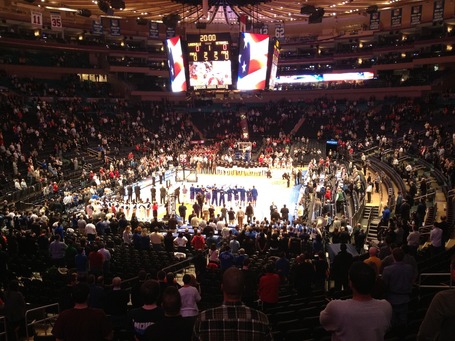 We wound up sitting next to a scout for the Bulls for the Louisville game, which was pretty awesome. He was an extremely nice guy and it was great to get a smart unbiased opinion on the game as it progressed. He was clearly worn out from the extremely poor quality of basketball he watched from around 7-9:30 and decided that South Florida and Villanova were not quite worth his time.

This game was pretty bland. South Florida started hot but around the 10-minute mark in the first half they just couldn’t hit anything. Luckily for them, Villanova was equally as bad.

11:40- We headed over to the Garden and settled in for the game this Big East Tournament deserved, UConn and Syracuse. In the final chapter of the tournament as we currently know it, this game had to happen, and it didn’t disappoint.

On our way to the seats, we walked by at Riley in the halls, which was pretty awesome. He is way taller than I thought and his hair is just as greasy as it appears on TV.

Anyway, back to the game. I really thought UConn could pull it off, but Syracuse really ramped up its defense in the last five minutes and the Huskies simply couldn’t get anything accomplished. It’s also very clear after yesterday that Dion Waiters is Syracuse’s most important and best player. He was in foul trouble in the first half and there was a noticeable difference when he wasn’t on the floor.

I don’t typically like bashing other teams fans but I simply can’t help myself. You absolutely cannot question the passion UConn and Syracuse fans have for their team. They show up and they get loud every year. They are not however the best breed of people from what I have discovered. This has been something I noticed in the past and yesterday was unfortunately not different.

It appeared we were some of the only one’s in our section who were actually in the correct seats, as everyone wanted to try and get a slight upgrade. One of the few others in the correct seat was an older man in his late 50’s or 60’s with Georgetown gear on. One of the people not in the right seat was a loud portly UConn fan in his mid 20’s. The UConn fan was the only person anywhere near us standing up throughout the first half, and rightfully so Georgetown fan wanted him to sit down so he could also enjoy the game.

It appeared as though the usher gave the kid the boot from the section; however he sweet talked him and allowed him back in. Upon his return, portly UConn fan started running his mouth and tried to coax the friendly Georgetown fellow into a fight. A classy guy if I have ever seen one. Thankfully he wasn’t back in the second half.

4:00- I am not excited because Georgetown and Cincinnati were not putting on the most exciting of shows.

4:15- Things are getting closer as Georgetown takes their foot off the gas and Cincinnati starts scrapping. The end of regulation and the two overtimes completely made up for the lackluster first 36 minutes of the game.

5:30- We headed back to Stout again to Party with Denny and Griff again. Is their any better kind of Party?

6:40- we got to our seats and I wasn’t really paying attention to what was going on and I found myself wondering why Syracuse was warming up, only to quickly realize it was the infra-red’s.

There weren’t many people in the at this point, but Mr. Siva was. He’s awesome. I would like to be friends with him. The Zoom on my phone camera kind of makes this picture I snapped look like a big foot sighting. 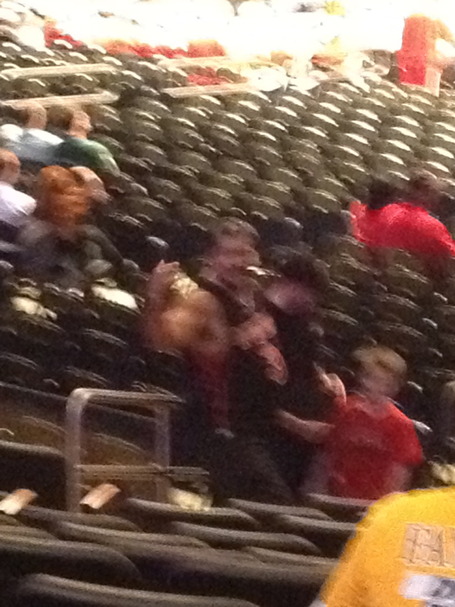 9:05- Every Louisville fan in the Garden is not only Jubilant, but happy the clock finally decided to strike 0:00. I don’t think it can be understated how huge that win was. This is a new team and they are playing like we all thought possible for most of the year. They need to come out with the same level of intensity tonight and as we move forward. If we can do that, loosen your belts and get out of the way.

11:00- The Garden really cleared out as Notre Dame and South Florida simply were not cutting it for most casual fans. Thanks to the generous people who left early, we got a pretty nice seat upgrade for last few minutes and overtime. I assume it was a common sentiment amongst Louisville fans late last night that we would be ok staying up extra late for as many overtimes as those two teams wanted to play. Unfortunately they only gave us one, but I’ll take it. 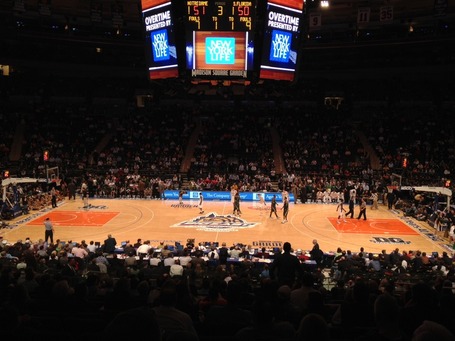 It’s been a fantastic week thus far up here and to have a Louisville game to get excited for tonight just makes everything better. This is an event that I encourage everyone to at the very least look into in the future. It’s so much fun and these teams always put on a show.

Let’s keep this momentum going tonight and as we move forward. I truly look forward to having my eyeballs hurt tonight from all the infrared.