So that was fantastic.

Louisville fans got what they've been wanting since, well, the start of the season, as the Cardinals pasted ninth-ranked Marquette 84-71 in the Big East Tournament quarterfinals on Thursday night. U of L will now face Notre Dame in the semifinals for the second straight season and attempt to make their third Big East championship game appearance in four years.

Louisville scored 50 points in the first half last night. The Cards had scored 61 points or less in six of their last seven games. I mean that's just mind-blowing.

Knowing that a performance like that is possible couldn't be a bigger confidence boost for this team (and this fan base) heading into the NCAA Tournament. And that remains the case if the Cards lay an egg tonight...which I don't think happens.

My point is that we finally put up a big number, and it wasn't the result of one of those crazy, "everything we throw up is going in" nights. We're still due for one of those. Wouldn't mind seeing it happen in about eight hours.

So this is how good we can be with Peyton Siva playing to the best of his ability? Ok, well enjoy this team. Let's keep this team around.

After the game both Gorgui Dieng and Chane Behanan talked about how this was the Peyton they all saw before the season, and how different things would have been during the regular season if he hadn't been playing hurt. Chane also mentioned that Peyton got too caught up in listening to people "on the outside," and that now his focus is solely on what takes place between the lines and in the locker room.

If I ran this world (two years, people), there would be an Anthony Davis-esque "Jared Swopshire: Big East Tournament Most Valuable Player Candidate" poster underneath every seat inside Madison Square Garden tonight.

How tremendous has that guy been for the past two nights? He could not have come up bigger when Gorgui was relegated to the bench, and for a stretch he was legitimately bullying Marquette's big men in the post. Swop finished the night with 12 huge rebounds in 20 big minutes.

Also, I would read a book on tape written by Jae Crowder if Swop was voicing it. 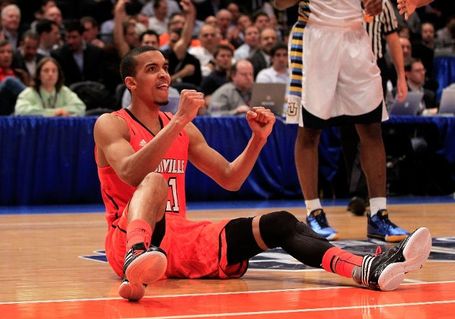 Also, saying "Swop Swop Swop" to the tune of the Rudy song when that commercial comes on is extremely contagious. Thanks to Danny Sinnard for bringing that revelation to light.

A friend and I had a conversation a few weeks ago where we discussed how Peyton Siva was Woody from Toy Story and Russ Smith was Buzz Lightyear (yes, this blurb is happening).

Siva entered the season as the most time-tested and reliable player on the team. He had proven that he knew how to do things the right way, and he was in charge (even though he's not overly authoritative, there's an understanding that it's his show).

So then here comes Russ/Buzz. He's brash, he's reckless, he's flashy; he's supposed to be the same as Siva (point guard/toy), but he refuses to believe it.

What Russ is doing is brand new to everyone on the team, but somehow it's working, and as a result everybody thinks he's pretty cool. Peyton can't understand it, and it bothers him deeply that his old, proven way of getting the job done doesn't seem to be cutting it anymore.

Then Russ starts slumping a little bit, and begins to doubt himself, partially because of Woody's words.

This is where the conversation ended.

At the time, it definitely seemed like Peyton wasn't particularly enamored with Russ, but - following the Toy Story plot - the possibility of an eventual mutual understanding and resulting cohesiveness was enough to keep hope alive.

I think that moment officially happened during the Seton Hall postgame press conference where the backcourt mates happily discussed their new steals contest. Now...anything is possible. 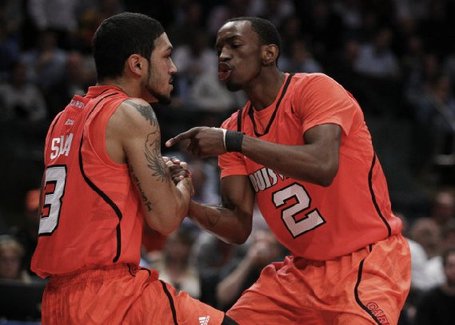 I can't believe I'm about to say this after just one date, but I think Infra-Russ is my new favorite Russ. When you know, you just know. You know? 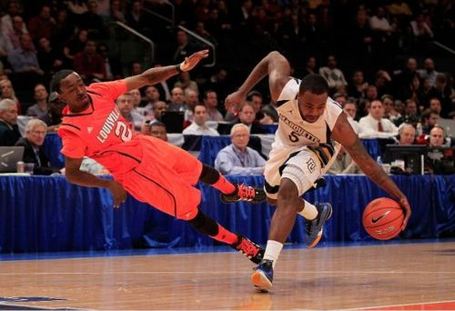 You take the infra-red pill, you stay in New York City, and I show you how deep the rabbit hole goes. 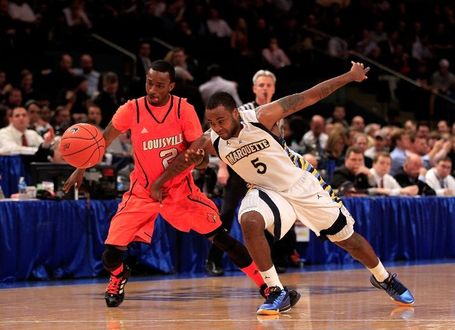 I'm not sure if my favorite Russ moment of the night was the backwards throw over his head from the ground with five seconds left, or the hugging of Pitino when he was trying to shake hands with Buzz Williams...and then getting made fun of for it.

Actually, it was probably the 900 steals.

Someone has got to put some stick 'em or something on those court decals before tonight. That was absurd. Sure, hilarious when it happened to Marquette, but absurd nonetheless.

Some stats that bode well for the Cards on Friday evening against a Notre Dame team which won in overtime last night:

When a team wins an overtime game in the Big East Tournament (prior to the championship game) they have won their following game only 4 out of 24 times. One of those four wins was when two such teams were playing each other and another win was when the team playing the overtime game had over 28 hours from the end of the overtime game until tipoff of their next game.

It's been about 17 hours since it happened, and Giggling Gorgui is still the greatest gift the world has ever received. I really, really wish someone had asked he or Pitino about it last night, but I suppose if you weren't watching the game on TV you couldn't have been privy to the magic.

Have to love this sequence of postgame comments though: 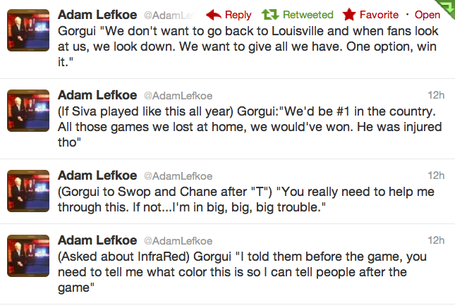 One option, win it.

I'm not even going to get into it, Karl Hess, but you know I'm not happy. You know this.

The best part about last night's game - outside of the obvious fact that Louisville scored 84 points and beat the No. 9 team in the country - was the fact that there were so many times where it felt like our guys were simply out-hustling and outworking the Marquette players.

You always knew the Golden Eagles were going to make a few runs, and every time they did, Louisville answered the bell. MU cut the lead to one in the first half with Gorgui out, and then Kyle Kuric buried a huge three and the Cards went on a 13-2 run. They got it down to four in the second half when U of L went ice cold from the field, and the Cards chased down two loose balls and got another three from Kyle's Korner to quash the rally.

Louisville wanted that win more than Marquette, and they got it. If this team loses in the postseason, it's not going to be because they got outworked, and as fans that's all we can ask for.

Eric Wood is a man of his word: 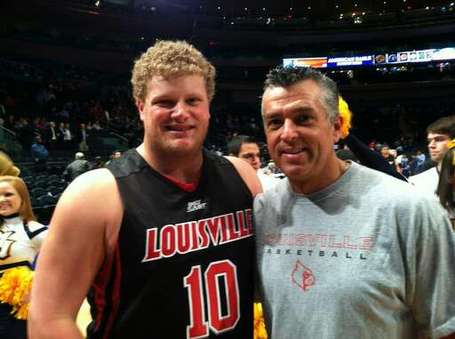 And a man of intensity: 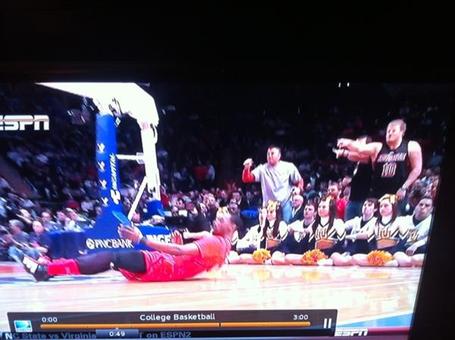 Eric would also like the CC community to know that he lured Jae Crowder into a bit of a taunting match, and then drove him to commit his fourth foul.

In his words: "I can't take enough credit, honestly."

Kyle Kuric's team-high 20 points grabbed headlines, but it was the King getting scrappy for 36 minutes that was far more encouraging and vital to the victory. This was the game Rick Pitino has been begging Kyle to play all season, and to be honest, it was one I wasn't sure he was capable of having. KK proved me completely wrong by getting his hands on loose ball after loose ball, making moves on offense to get into the lane, and blocking three shots.

Again, I'm trying to be over the top, but good things are happening all over the place right now.

U of L's RPI is now up to 20 with a strength of schedule of eight. Win two more games, and that NCAA Tournament seed could be far more fancy than we thought just a couple of days ago.

If Louisville beats Notre Dame, I will legitimately hand a blank check to any tailor in this city (or New York) capable of creating an infra-red suit in less than 24 hours.

There is a dream that is Infra-Rick.

I'd give a toe for my name to be Vander Blue.

Just going to come right out with it: I thought we'd lose handily Thursday night.

Marquette is awfully good and they're not a particularly great matchup for the Cards. For us to never trail, score 84 points and win by 13 on a night where the Golden Eagles didn't play poorly is still messing with my mind.

Louisville is now one win away from the grandaddy of all conference championship games, and in the last tournament with the league existing as we've known it.

It's already been a special couple of night, but these next two have the potential to be legendary.