It's a shame Louisville couldn't close things out convincingly against Seton Hall, because if the final two minutes had gone in accordance with the first 18 of the second half, the overall vibe last night and this morning would have been/would be about 75% more positive.

It's especially disappointing because the final couple of minutes are now receiving more attention than the fact that the Cards shot better than 53% and scored 38 points after halftime last night. It might not seem like that incredible of an achievement, but compare it to the past four game and it's f'ing parade-worthy.

Good things happened last night, and it would have been nice to celebrate those without reservation. Instead, it feels like we're back to being split into "survive and advance" and "we missed 8-of-10 free-throws and tried to give the game away" factions. Both have valid points, of course, but a united, positive front to kick-off the postseason would have been preferable.

Still, I think we can all agree that waking up this morning knowing we had all day to look forward to a date with Marquette in the quarterfinals of the Big East Tournament was infinitely better than suffering through four days of Cards-less basketball before Selection Sunday. One of the best parts about winning in the postseason is getting to enjoy the rest of the action with full-knowledge that U of L is still part of the fun. We have that privilege today. It's nice.

Pull off an upset tonight against the No. 9 team in the country, and suddenly everyone will be having fun again.

Gorgs was an absolute difference maker once again, altering at least four or five of the shots he didn't block. It got to the point where I was rooting for Seton Hall's guards to get into the lane. He again showcased that newfound fiery attitude (LOVE Fiery Gorgs), and was the only Cardinal to grab more than five rebounds, finishing with ten.

After the game, WHAS-11's Adam Lefkoe asked Gorgui to describe what color Louisville's new jerseys are. His response: "I don't know colors."

I love this human being.

I got a picture message yesterday from someone in New York modeling the uniforms that Louisville will be wearing tonight. The picture that Adidas released really doesn't do them justice. They are insanely bright, and the new sneakers follow suit.

The players enjoy them and we haven't lost while wearing them yet, so I'm all for this.

It probably wasn't the greatest game Peyton Siva has ever played in a Louisville uniform, but I don't think there's any question that it was the best he's looked in 2012.

Siva played with a combination of confidence and poise that has been painfully absent in recent weeks, finishing the night with a team-high 14 points, six steals, five rebounds and three assists. And really, the assist total should have been around seven or eight because his teammates missed several wide-open looks after he gave them great feeds.

There was one mini stretch early in the second half where he took a bad shot, turned the ball over and then committed a silly foul, but outside of that it was hard to complain about any part of Peyton's performance...which is saying something considering the seemingly constant chatter from Cardinal fans since December.

The offense didn't exactly "pop" in the manner most of us have been hoping for, but Peyton playing so well is a gigantic step forward to start the postseason.

Some extreme +/- statistics from last night:

Swop's the new Sinatra, and since he made it here, he can make it anywhere, yeah they love him everywhere.

Louisville avoided scoring less than 60 points in five consecutive games for the first time since 1944. So we've got that going for us, which is nice.

On the flip side, the Cards have now had two different streaks of five consecutive games where they've held opponents to 60 points or less for the first time since the 1947-48 season.

Fully aware of how important this game was for his team, Rick Pitino was a mad man on the sidelines, reportedly punching out one of the electric advertisement boards in front of the scorer's table, raging on Russ Smith and throwing his clipboard at least three times. 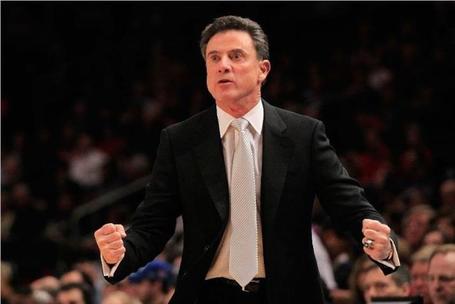 Disagree with his decisions or philosophies all you want, there's no question the man wants to win every bit as badly as we do.

Speaking of disagreeing with decisions, this team needs Russ Smith starting in place of Chris Smith. I know we're already a game into the postseason and it would seem the time for these types of changes has come and gone, but every time we tip-off it feels like the best-case-scenario is being even with our opponent at the time of the first substitution.

It's been said a thousand times here and elsewhere, but Chris and Kyle Kuric are basically the same player. It's when they're on the floor together for significant stretches that our offense seems to devolve into simple passes, Peyton dribbling a lot and then a forced attempt at the end of the shot clock. Russ is going to drive you crazy half the time, but the other half he's actually making things happen. There are worse things than missing a runner in the lane when Gorgui and Chane are in better position to rebound then the scrambling opposition. Attempting a desperation three-pointer, conversely, essentially eliminates any opportunity for a put-back and results in a wasted possession if the shot doesn't go down.

Don't get me wrong, Chris Smith has to play for this team to be successful, it's just that with the limited number of offensive weapons Louisville has at its disposal, having the right combination of players on the floor at the same time is paramount. The starting five don't seem to play all that well together, which is why I don't understand why they continue to remain the starting five. There's no shame in shaking things up when you've been averaging 53 points per game.

Pitino said after the game that he knows he can't have his team play at that pace again without making more substitutions. He then added that he expects Wayne Blackshear and Kevin Ware to play more minutes against Marquette.

I'm fully on board with one of those changes.

CC comrade Eric Wood is in New York this week, and he's reminding all of us how much better his life is than ours by enjoying floor seats. This wouldn't be an issue, but the man has a tendency to get a little too excited when U of L basketball is involved. 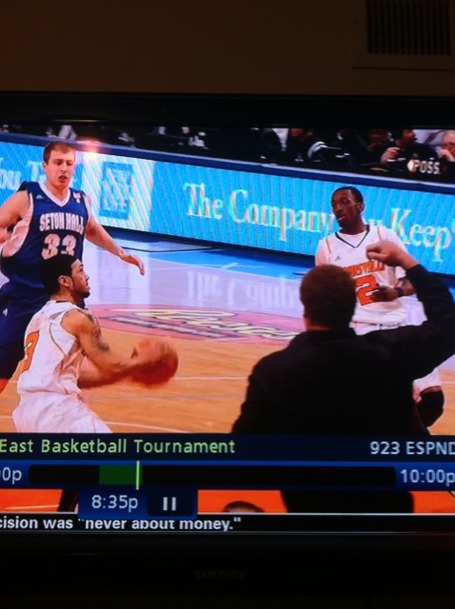 Also, brace yourself for an abundance of man: 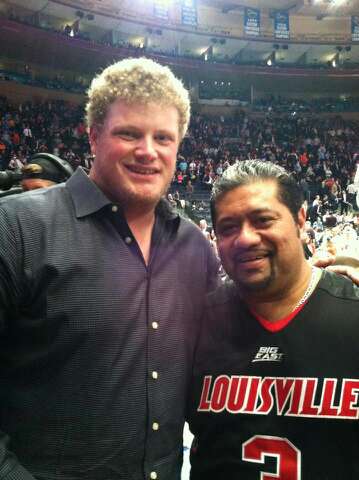 Wood claims he's going with the matching Gorgui jersey (sans undershirt) tonight so "we can support our sons together."

I think we can all look forward to that.

I was fine with the halftime ribbing from the ESPN analysts...until Digger Phelps joined in.

It's sort of like when you do something unbelievably stupid and you know all your friends are going to make fun of you. It's all fun and games until that one guy you secretly don't like decides to get into the action and you flip out.

I said this on Twitter, but when Gorgui Dieng throws your shit into the 10th row and then comes over to help you up, you accept his damn hand, Jordan Theodore.

I haven't been noticing the on-court shot clock as much as it seems other people have, but when I do, I enjoy it. No complaints here. Unless Digger supports it, in which case it's the f---ing worst.

If you'd ask me to rank the players who might fall victim to the "not getting up to the college three-point line" plague that seems to be inherent with playing inside Madison Square Garden, Kyle Kuric would have been near the bottom (Russ would have occupied at least the top three spots). And yet last night it was the king who was consistently attempting shots from a step or two deeper than he would ordinarily.

When Kyle has been missing over the last couple of weeks it hasn't usually been left or right, and it's never been long. That's good news, because it means he's a correction of an inch or two away from burying everything he throws up.

The staff just needs to tell him to make sure he's up to the college line and to aim for the back rim. If he does that and gets the same looks tonight that he had on Wednesday, we could see a show.

I also feel like Kyle is baiting opponents into making these passes he keeps intercepting in the back of our zone. If you told me he'd some time in the offseason working with William Gay, I wouldn't be surprised. Ok, yeah, I'd actually be really surprised, but I still think he's making it look like guys are open on purpose.

Shoutout to Tim Henderson's mom ("cardinalmom") rocking the No. 15 jersey in the stands. Internet high-five to you.

The odds of Chane Behanan fouling a Marquette player on a three-point attempt tonight can't be any better than 950:1. I'm pretty confident the young man learned his lesson.

Zach Price: one point in your Big East Tournament box score, 1,000 points in your heart.

Some video of Peyton Siva talking with ESPN's Dana O'Neil after the game. Just in case you're in the mood for that sort of thing.

Winning last night was big for NCAA Tournament seeding purposes, but also because this team has to get into some sort of offensive rhythm heading into the dance. The only way that can happen is if it keeps playing. This year's Marquette team isn't a great matchup for U of L (they're also, you know, really good), but this is a game the Cards need to play.

Win tonight and suddenly the talk of something "special" happening resurfaces. In the end it all comes down to winning, and I'd kill (figuratively) for us to be talking about another game in the Garden this time tomorrow.