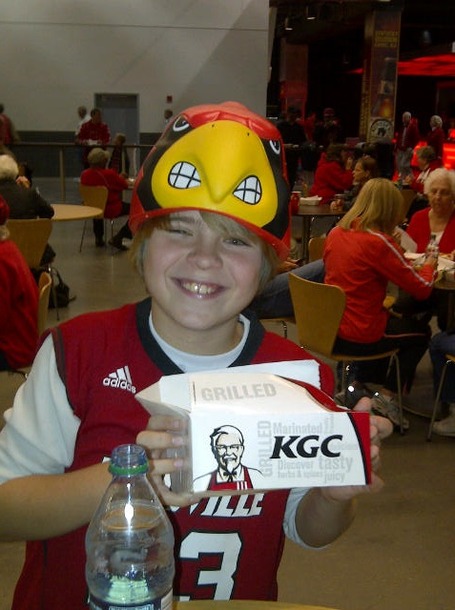 Logan Gardner will never give up on bringing Chicken to the Bucket, or at least Freedom Hall for the Derby Classic.

A pants-off victory celebration right now would be premature, but this is a monster step in the right direction.

I think we're all still reeling a bit after Saturday's 49-point performance, but I also think all it's going to take for us to get over it is watching a little bit of the Big East Tournament on Tuesday. Once the action gets started in the Garden tomorrow afternoon it'll be time to move on and focus on the second season.

It's the Big East Tournament, dammit, and this year's is going to be even more special than usual given that it's the last one for the conference as we've known it.

More on that in the morning.

A few interesting trends from the Syracuse game: 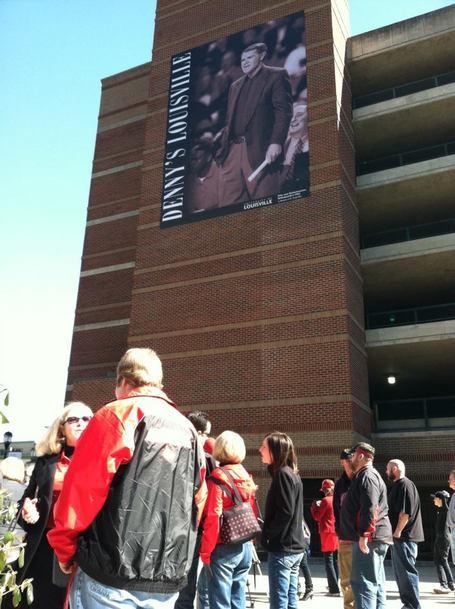 The Louisville baseball team took its series with visiting Pepperdine over the weekend. The Cards are ranked as high as 14th in this week's polls, and as low as 24th.

Fab Melo was named the Big East's Defensive Player of the Year on Monday despite having fewer blocks, steals and rebounds than Gprgui Dieng.

It's one of those deals where if Louisville is 15-3 or 14-4 in the league instead of 10-8, Gorgui probably wins the award. Drill someone with a snowball in New York, Gorgs.

Good story from ESPN on Louisville's ability to keep its football staff together.

Louisville is the only Big East school that has not lost a head or assistant coach since the football season ended. The biggest shakeup happened during the year, when Mike Sanford was relieved of his duties as offensive coordinator and Shawn Watson stepped in. But even then, coach Charlie Strong simply elevated a qualified candidate he had on staff without much muss or fuss.

When Watson was officially named offensive coordinator last month, it was expected. Strong made one other move -- elevating grad assistant Sherrone Moore to tight ends coach. So essentially, the staff is the same one that Louisville had for nearly the entire 2011 season.

The man Watson is replacing as U of L offensive coordinator, Mike Sanford, has been hired as the running back/tight ends coach at Utah State.

Seventy-degree weather, tornados, sub-freezing temperatures, gorgeous snow fall beneath a blue sky; if you woke up tomorrow morning and looked out your window and saw a beach in front of a large body of water, would you really be that surprised?

I hope your answer is yes, because that would be f'ing insane. Wayy more insane than snow under a blue sky. Wayy more. 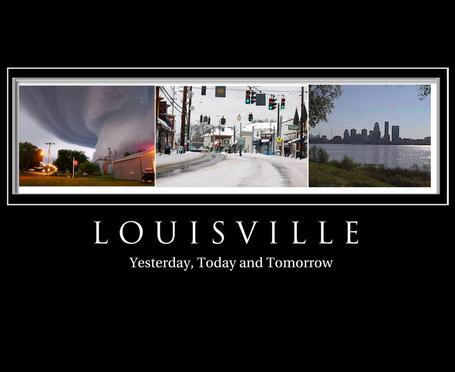 The U of L women's team fell to St. John's in overtime of the Big East tournament quarterfinals on Monday. The Cards now turn their attention to the NCAA Tournament.

A nice video feature on Jeff Walz from CBS.

Louisville again finished the season third in the country in men's basketball attendance, trailing only Kentucky and Syracuse. North Carolina and Tennessee rounded out the top five.

And finally, the latest Bracket Matrix update has Louisville holding on to a five seed. There's a lot on the line for the Cards this week in New York.