Be sure to check out the full photo gallery from the event. There's some really good stuff in there.

University of Louisville head football coach Charlie Strong talks to his team all the time about being grateful for what they have, and to be thankful for the opportunities that they are afforded each day.

The football team was able to see it first hand on Saturday morning when Strong and the players hosted a group of young children from Kosair's Children's Hospital and the Indian Summer Camp who were afflicted with cancer or have already beaten the deadly disease.

Approximately 65-70 children and their families were treated by the football program on Saturday morning at the Trager Indoor Practice Facility.

Strong gave the kids a tour of the facility, which included the weight room, training room and the locker room. He showed the kids a highlight video from the 2011 season before putting the kids through a series of drills with the Cardinal players while also playing "Card Ball" with current players. 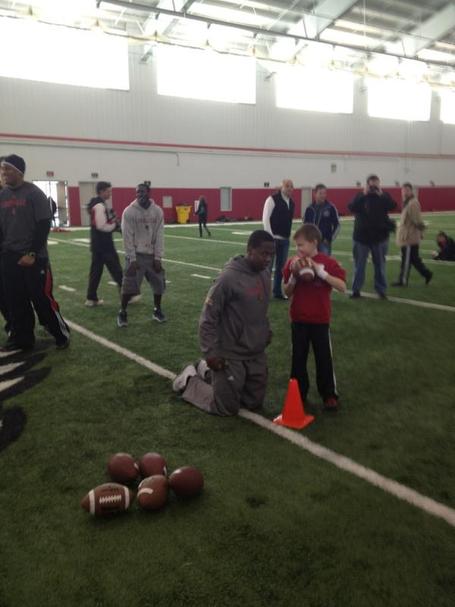 The day concluded with autographs from the players and coaches, and a bag lunch for the kids and their families.

"We take so much for granted," Strong said. "We take our health for granted. Then you think about what happened with the storms on Friday. We work our whole life for things and it can be taken away. We want to keep those people in our prayers. Today was a camp for kids with cancer. You think about what they go through, and this was a chance for them to come out and run around. They are having fun and we are able to bring a smile to these kids' faces."

The camp marked the first time for many of the kids to get out and run around and have a little fun.

Strong said it was inspiring to see how affected the Cardinal players were, and how much fun they were having with the youngsters.

"We had our players out here teaching the kids how to throw the football and go through different drills," Strong said. "I told the kids that they are my hero for what they have to go through every day with the treatments and the pain. It's just great to bring a smile to their faces and give them the opportunity to run around. It was a great day for everyone."