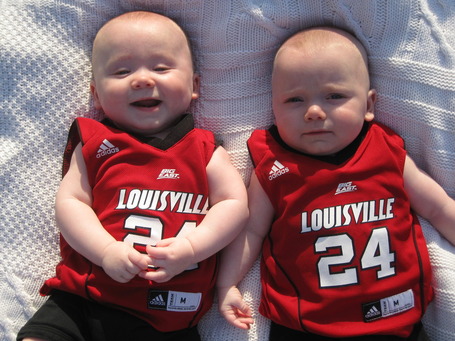 Twin Babies 4 Behanan. It was only a matter of time.

Just a quick programming note that, with all this stuff flying around, you're probably going to be seeing another news and notes post before this day is over. Plan your lives accordingly.

Dave Kindred was my favorite college basketball writer growing up, so speaking with him earlier this week and then seeing him quote something I'd written in his great piece for Grantland were a pair of pretty cool experiences. 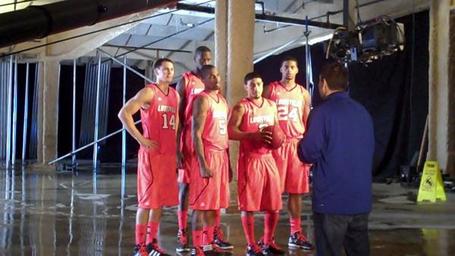 Is this really happening?

The U of L softball got this week's festivities on the right foot by moving to 28-0 last night with a 1-0 win over Kentucky in Lexington.

The players from the 1983 Dream Game believe that this Saturday's game is a bigger deal.

"I'd like to think that people remember me for the totality of my career, but the bottom line is that it's really about the UK game and what I did in the tournament," Gordon said. "It still carries over."

You bet it does. The 1983 game still resonates - and players from that game believe that Saturday's Final Four collision between the schools will shake and stir the state even more vigorously.

Why? Because the stakes are upgraded. That 1983 game, the first between the schools in 24 years, was for a Final Four trip. This one - in the NCAA semifinals at the Superdome in New Orleans - is one step deeper on the bracket.

The winner will play for the national title Monday night. The loser? Don't ask.

Anthony Davis says his injured knee is "90 percent," but that he'll be just fine for the game. 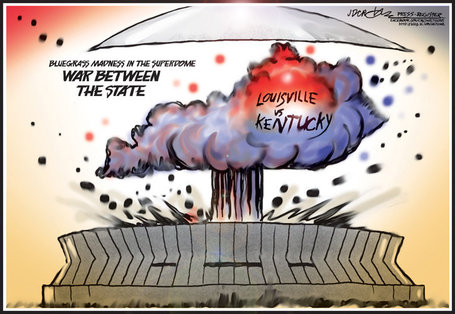 Quick shoutout to Eric Wood, who appeared with Stevie Johnson on the Jim Rome Show this afternoon and did a fantastic job talking Louisville hoops. He claimed that Gorgui Dieng vs. Anthony Davis was a "wash," but that's only because Gorgui refers to Eric as "boss." If Gorgui referred to me as a boss, I'd write a book about why he'd be a better president than Lincoln.

Chane Behanan was asked today why John Calipari always pronounces his last name "Bohannon." His response was quite humorous:

There's plenty of stuff on today's media sessions coming later (Chris and Peyton were hilarious, Rick straight dominated), but here's, in my mind, the money quote from the whole day:

"I don't believe in that 'playing with house money' stuff. This is our chance to win a national championship. We have everything to lose, just like they do." --Rick Pitino

This has a completely different feel than 2005. Even though they never came out and said it, that team acted like getting to the Final Four was its national title. This team might not beat Kentucky, and if it does it might not beat whomever it plays after that, but a loss this year won't be due to complacency. These guys and their head coach are after the top prize, and that's not a win over Kentucky.

Former U of L beat writer Brian Bennett writes about the apocalyptic preparation currently taking place in Louisville and Lexington.

Police in both Louisville and Lexington announced plans to close certain streets and beef up their presence around each campus as a precaution. Bars are expecting record crowds and trying to figure out how to handle them. Zanzabar, located near Louisville's campus, put a message on its Facebook page saying that only Cardinals fans could enter the premises Saturday night, not as an affront to Kentucky supporters but "to prevent fighting."

One of the city's largest bars, The Sports and Social Club in the Fourth Street Live! complex, is requiring reservations and minimum purchases for each table. General manager Tony Thomas said that the 566-capacity establishment was already about 85 percent reserved by Wednesday afternoon, and his cell phone wouldn't stop ringing.

Thomas plans to separate Louisville and Kentucky fans in different cheering sections. He has hired four extra security guards for the night and promises to eject anyone at the first hint of trouble.

"It's going to happen everywhere," he said of potential altercations. "It will probably happen at somebody's grandma's house."

Jeff Goodman with his take (video) on the Pitino/Calipari rivalry.

Billy Gillispie on what will happen if UK loses Saturday: "Kentucky fans would want to run all the coaches out of town and get rid of all the players."

Have heard from multiple folks that Lexington radio stations have been announcing areas that will be blocked off for this weekend's "celebration."

The rotunda inside Louisville's Metro Hall: 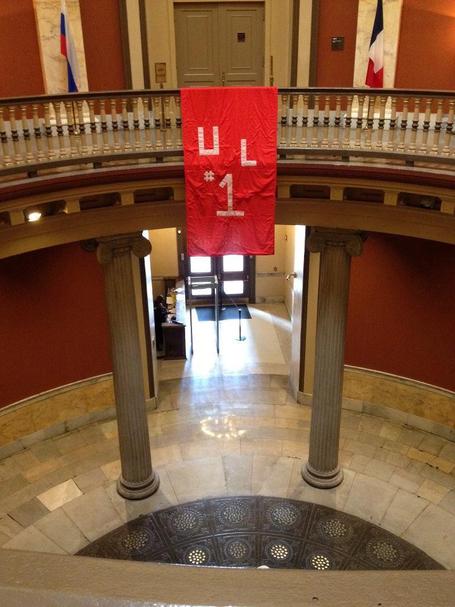 About 985 steps later and we've got our Gorgui in the Ohio River statue.

A Sports Illustrated Final Four spotlight video on Russ Smith. Just like everyone around here was predicting back in October.

Louisville resident Jon Bois brings some much-needed humor into this week's festivities with a look at what will happen in Louisville when the game on Saturday is canceled.

Via Drew Deener, this is a spot in new Orleans: 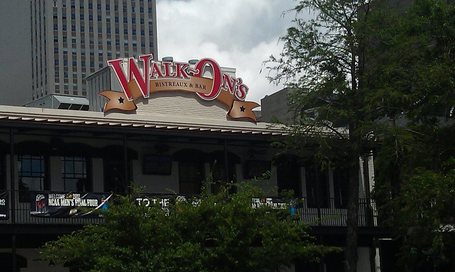 John Calipari jokingly said that he wanted to be the visiting team for the game so that Louisville couldn't wear its infra-red uniforms. It wasn't a very good joke.

Calipari also said that he thinks Louisville will play an up-tempo game and that he expects the final score to be in the 90s. This would have actually been a better joke had he not been serious.

In Kentucky, basketball is at least as big as football in Alabama.I'd argue it's bigger. I drive around Alabama and see very few homemade goal posts in pastures. Take a drive down any country road or city street in Kentucky and you'll see a basketball goal on every barn, in every driveway, and on trees. In Kentucky even the squirrels shoot threes.

Just like Alabama grannies can speak fluent gridiron, Kentucky ma-maws know as much about point guards, power forwards and zone defenses as they know about quilting and canning blackberries.

Alabama and Auburn friends, close your eyes. Think about a day a few years from now when the BCs national champion is determined by a playoff tournament. In this hypothetical year, the Iron Bowl was a close game but it was played early in the season, with nothing at stake but bragging rights. But now, both Alabama and Auburn are one game away from the crystal ball. Alabama vs. Auburn, the winner plays for a national championship.

But Nick Saban will find a way to win, right Alabama fans? Problem is, in this scenario, Nick Saban is now coaching the Auburn Tigers. Yep. He traded 'Roll, Tide Roll' for 'Whoop! War Eagle', just like Rick Pitino left Kentucky and wound up in Louisville.

Until that happens, and until Alabama and Auburn face each other in a game of national championship importance, the semi-final in New Orleans this Saturday in New Orleans is the biggest, most heated college sports game between in-state rivals ... EVER? What do you think? Please, no NASCAR references.

Louisville's remarkable turnaround all started with that players' meeting in january.

Another one of these floating around: 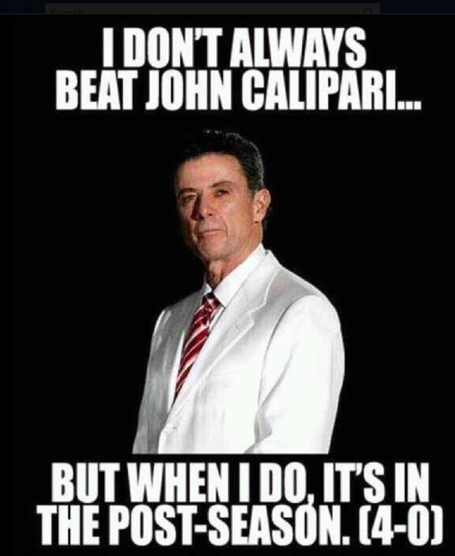 A good read on the last time Pitino and Calipari met in the NCAA Tournament.

Both teams are fully aware that a lot has changed since the first time they met.

A quick reminder that tomorrow has been declared (like, officially) "Cardinal Red Day" day in the city of Louisville. All red everything.