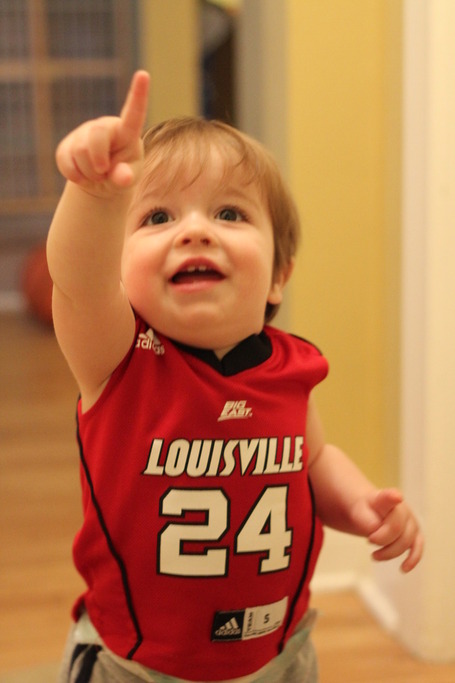 Louisville/Kentucky got some attention in Washington today, as Mitch McConnell took to the Senate floor to speak about the game.

"But this coming Saturday, March 31, we will witness one of the greatest moments in Kentucky's sports history.

"The two teams will face off in a semifinals game in New Orleans. And the winner of that game will contest for the national championship the following Monday night.

"In my home State of Kentucky, the rivalry between fans of UofL and UK is a passionate one. From birth, it seems, Kentuckians are raised to root for one of two teams-you either wear red for the Louisville Cardinals, or blue for the Kentucky Wildcats.

John Yarmuth and Ben Chandler were also in the spirit: 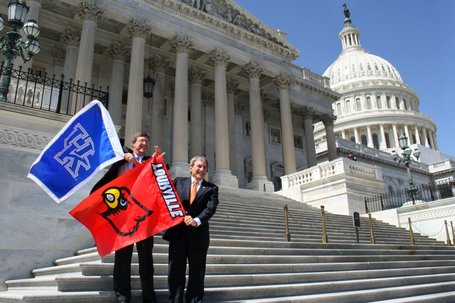 Louisville's open practice at the Superdome will be on Friday from 12-12:50 (Central Time...so, 1-1:50 here if you want to catch a glimpse on ESPNNews). They will be the first of the four teams to take the floor.

Here's the full rundown of events in New Orleans this weekend.

I was looking at the box score from the New Year's Eve game this morning and couldn't believe that only three players - Anthony Davis, Michael Kidd-Gilchrist and Russ Smith - made more than two field goals.

Good defense, bad shooting, and lots and lots of whistles. 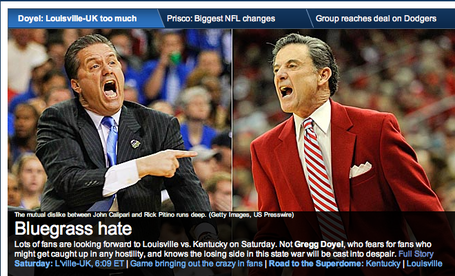 Gregg Doyel fears for the safety of the fans of the losing side on Saturday.

The Huffington Post's Ben Woods tries to figure out how Louisville went from a team that couldn't score to one that is two wins away from a national championship.

You put the Marra wave in your video, it's getting posted on Card Chronicle. It's absolutely as simple as that.

Nick Fasulo of NBC Sports gives the people 10 things they should know about Louisville-Kentucky leading up to Saturday, and refers to Matt Jones and I as "mildly famous" and "get it guys."

While any level of "fame" is only applicable to Jones, I'm going to go ahead and keep the "get it guy" status with the hope that it's a reference to drugs. It's not true, of course (he says for legal purposes), but I feel like it's a rep that could do some good things for me.

Eric Crawford with a nice reflection on how the 1983 Dream Game was covered and how this Saturday's game will be covered.

It's time for the media to start paying attention to the week's real rivalry...

Chuck Klosterman writes on Grantland that college basketball will be worse-off if Kentucky comes back to Lexington with the national championship. 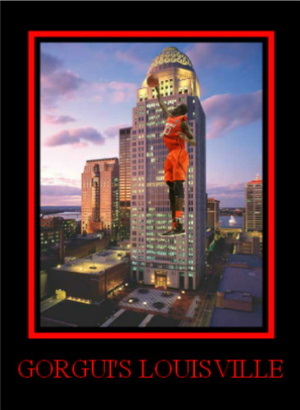 Pat Forde profiles Rick Pitino and paints him as one the most interesting prominent sports figures in America.

There is little question that John Calipari is better at running a college basketball program right now that Rick Pitino is. There is a reason that Kentucky has hoarded enough talent to roll through the NCAA tournament and into the Final Four as a heavy favorite. But being able to stockpile NBA talent doesn't make Calipari a great in-game coach. Pitino made two defensive adjustments in the Elite Eight: the Cardinals ditched their zone and went man-to-man in the second half against Florida, and when the Cardinals started to get beaten by the pick-and-roll, Pitino again adjusted the defense so that Dieng would defend the rim, while Behanan would man the perimeter. The last time that Kentucky played a close game? The Wildcats were befuddled by a 2-3 zone that Vanderbilt threw at them in the final minutes of the SEC title game. The added intrigue here is that all the pressure is on Calipari. He has never won a title and believes that his legacy at Kentucky will be compared to Pitino's. He's also coming in with the overwhelming favorite, a team with potential first-round draft picks at every position on the floor.

Rush the Court takes an extensive look at the original Dream Game.

If you missed our radio show last night on ESPN 680, you can listen to it 500 times in a row by clicking right here.

A few months ago we featured this shot from Rich Hoyer:

Several folks inquired about buying a print, which is something you can do from Rich's website.

A college merchandise store in Northern Kentucky that actually has a Louisville flag in its window claims it doesn't have "any of your people's shit" in stock.

This is your quick, daily reminder if you're an out-of-towner to email me (MikeRuth5@aol.com) with where you'll be watching the game on Saturday to help spread the word to other Cardinal fans in the area.

Ninety-seven percent sure this is one of my daughters.

If it's not I'm stealing her.

The HuffPost looks at the "X-factor" for each team in the Final Four. I'll give you two guesses as to who Louisville's is.

Am I going to have to be the one who writes the 3,000-word exposé on Russ losing the undershirt? Apparently.

Shoutout to these Cards fans in Lexington: 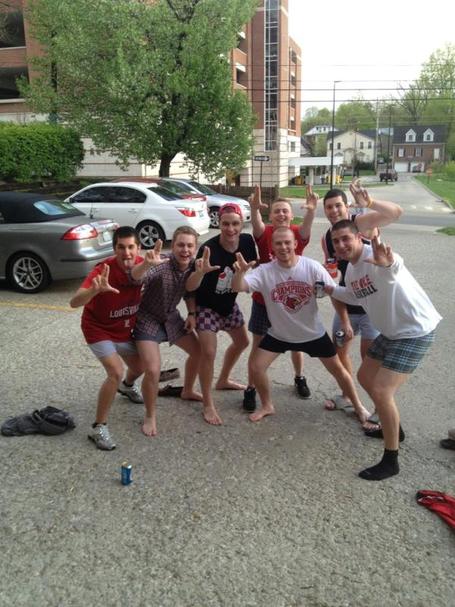 I mean, the guys get it. Really nothing else that needs to be said.

ESPN's Eamonn Brennan says reading anything into the New Year's Eve game would be foolish at this point.

So: What, if anything, does that tell us about Saturday's rematch?

Not much, I don't think. These two teams are both much-improved from the first meeting. Kentucky coach John Calipari has consciously slowed the pace of his team. Davis has expanded his game. Guard Marquis Teague has gone from a slightly erratic, turnover-prone liability to a driving, commanding perimeter force. In general, the Cats' offense is so much more fluid and tidy, with each of its pieces and sets -- flex handoffs here, standard screen-and-replace actions there -- benefiting from this stacked team's unified willingness to communally accept its respective roles.

That's because this Louisville team is defending better than ever. It will enter Saturday with the nation's No. 1-ranked adjusted efficiency defense, per Ken Pomeroy. This defense is tricky and hard to read. It can go zone, as it did against Michigan State; it can go man, as it did against Florida; it can press to speed up the game; it can press to slow it down. More than anything, this squad is more capable of wearing teams out, of "getting into the legs," as coach Rick Pitino put it in Phoenix last week. The Cardinals' offense hasn't improved much. But the team as a whole, other than the names on the jerseys, couldn't be much different.

Adam Lucas has some great U of L/UK wallpapers for the week.

Rick Pitino appeared on the Dan Patrick Radio Show earlier today. You can catch that interview in its entirety, right here.

Headlines are a dangerous art:

Local rappers Mixed Magic and Bukshot have released an anthem for this weekend's game. You won't like it if you don't like rap, obviously, but it is actually well done.

This might be one of the best Final Fours ever (video) with Kentucky, Louisville, Ohio State and Kansas having combined for 49 Final Four appearances.

CBS has a really interesting piece in which anonymous coaches who have faced the Cards this season give their take on Louisville's strengths and how to stop the Cardinals.

"One thing you can do with their big guys is score in transition. They don't get back all that well -- and they get back in the zone. If you get the ball in the middle of that zone, you can cause them problems."

"Attack Dieng early. He's so good at challenging shots. If you start jacking up 3's and miss, it just gives them more confidence. You have to go inside and shot-fake. You have to attack inside first."

"Half-court offense. They go through long scoring droughts and it's usually because the other team is scoring. You have to starve them in their press. Make them take the ball out of bounds and anyone can beat them. Half-court offense is their weakness."

"I don't think they can play you man-to-man. If they have to come out of the zone, they're in trouble. Depth is also a problem, especially on the frontline. [Jared] Swopshire can steal a few minutes, but they don't have a backup for either frontline guy -- or for Siva."

"Free-throw shooting. For the last few years, they haven't been a great team at the line. That could come back to bite them at some point."