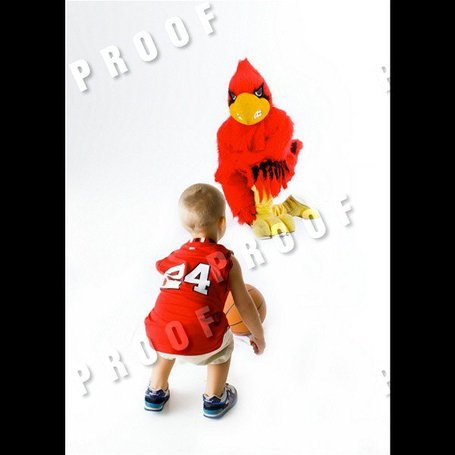 It appears Babies 4 Behanan is going a little Hollywood on us.

Such a "New Babies 4 Behanan" move.

Mark and Ennis and I are back on the air (LIVE) tonight from 7-9 on ESPN Radio 680 and streaming on ESPNLouisville.com. We will talk about college basketball, with a focus on the pair of predominant local teams.

This would ordinarily deserve its own post, but there are so many quality videos floating around right now and I hate to keep chucking video posts at you. Anyway, from Sir Adam Lefkoe comes the first true Blockbuster of the spring season: "Fun With Gorgui and Chane": 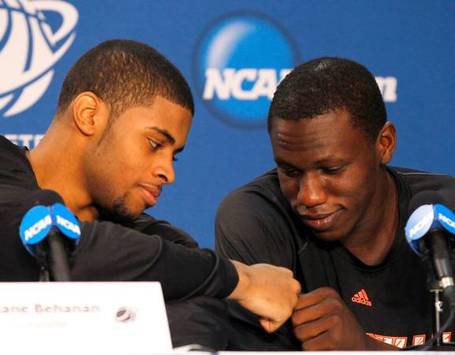 The folks at the Cardinal Authentic in the Yum Center would like all Chronicloids to know that they support the Babies 4 Behanan movement, and have the supply to meet the demand. 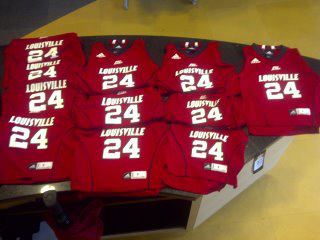 They also say they have plenty of Baby Gorgs jerseys in stock as well.

So I get a Buick now, right?....How I've done business in the past.

"They just keep playing," Calhoun said. "They keep up the defensive pressure, and they got better and better. Kemba gave us an outlet. He put incredible pressure on teams one-on-one. There are some comparisons. There's no question that they're such a better team than earlier in the year, and they hit their stride in the Big East tournament."

UConn had to win five games to win the Big East tournament title a year ago. Louisville had to win one less.

"For teams that play hard, it's just lace them up and let's go," Calhoun said.

And playing Kentucky to get to the title game makes the two teams' runs seem similar.

"It's a coincidence in many, many ways," Calhoun said. "VCU and Butler were there for us and in many ways, even though they were good basketball teams, there was a feeling that if they got by UConn they [Kentucky] would win their first title since 1998. Not that Ohio State and Kansas can't win the title, but getting by Kentucky for Louisville will be an emotional deal for them."

The New York Times is the latest to tackle the Shakespearian drama currently taking place within the Commonwealth.

Gorgui Dieng had to use a towel to hide his face. He doesn't mean to do it. He knows, when his coach is serious, that his laughing could be seen as a sign of disrespect. But when Rick Pitino boils over, irate at a lack of execution or a silly play or something guard Russ Smith just did -- OK, usually at something Smith just did -- Dieng can't help it.

Gorgui Dieng's development gives Louisville a defensive presence few teams can equal. Kentucky happens to be one of those teams.
He laughs.

"It tickles me," Dieng said. "I told him, 'Coach, I don't want you to get mad at me or think I disrespect you.' I can't control myself. The things he say, when you hear that, you gonna laugh. He's so funny."

I was on a conference call with Jim Nantz this afternoon. They say don't engage in conference calls with your idols, but they couldn't be more wrong.

Only disappointment was that he didn't lead off with "hello, friends." 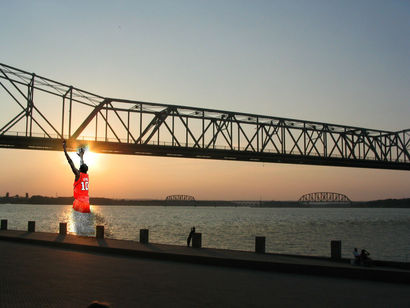 If we can set the world record for most people wearing red, pretttyyyy sure we can get a monster statue of Gorgui holding up the Second Street Bridge.

A new-look Rick Pitino will be leading the Louisville Harry Potters against the Kentucky Voldemorts.

And then into his life came this collection of future insurance salesmen and bond traders. He starts two seniors. Who even has two seniors anymore? And those two -- Kuric and Chris Smith -- gave back their scholarships so Pitino could sign more depth.

For Pitino, just seeing his happy-go-lucky center, Gorgui Dieng from Senegal, makes him smile as if he's on nitrous oxide. "I love his humility," he says.

During one huddle this season, Pitino was bawling them out for one thing or another. When he finished, Russ Smith held out his arms to him and said, "OK, Coach, now let's hug." Pitino just looked at him, fumblefluxed. Smith hugged him anyway and went back onto the floor.

Good stuff from Bozich on four seeds, who have advanced to the Final Four 11 times (Louisville is No. 12), but won just three total games and just one national championship (Arizona in 1997).

During the month of April if you buy ANY 6’’ sub before 9 AM you get a second one FREE. Stop into SUBWAY® for breakfast and pick-up lunch for FREE!

By the way, Seth has already picked UK. I'm going to go and interview Jared twice.

A letter from this morning's C-J that may be of interest.

Keep sending me your "where we're watching" locations for the post that will go up Friday night. If it's by yourself then I don't need to know that...Ok but no pictures....Ok pictures. 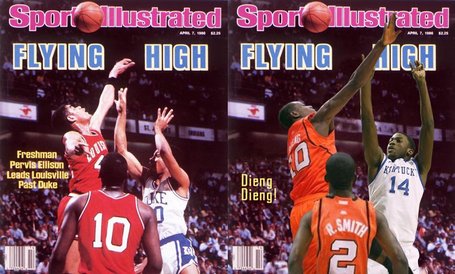 For those who have been asking and did not see it mentioned in the press conference wrap, there will be no Final Four parade or sen-off celebration. Pitino says there simply isn't enough time with the team being gone for so long and trying to get caught up with everything academically.

Regardless of the motive, I like it. In 2005 it sort felt like "mission accomplished" during Final Four week, and even after we lost to Illinois, the prevailing theme was "oh well, they were the better team but we're going to be back soon."

I love the "don't be satisfied once we get there" message that has dominated this run. These opportunities are so rare, and not embracing them and taking full advantage is always the wrong play.

Eric Crawford has some great audio from the interview with Gorgui Dieng that led to his profile piece this morning. It's cool to hear him actually say the words from such a tremendous read.

The folks at "Retro College Cuts" will be producing and selling replica 1983 Louisville basketball shorts if they get enough requests from Cardinal fans. Visit and request at their site or on Twitter.

Pat Forde obviously knows all about the Louisville/kentucky rivalry, and here's his take.

C. Ray Hall remembers "really bad" racism from Kentucky fans in the 1960s and early '70s. He was a Wildcats fan until 1971, when a mostly black Western Kentucky team demolished a mostly white Kentucky team in the regional final. The backlash from that had him swearing off allegiance to Big Blue for life.

"The bitterness, arrogance and hate of UK fans - the racism - was such that I didn't want to have anything to do with those people anymore," Hall said.

In contrast, Crum took Louisville's progressive nature to the next level, recruiting far more blacks than whites. And he let his teams play with soul. Huge afros were perfectly fine with the coach. Dunks and alley-oops became the program trademark. The 1980 national championship team claims to have popularized the high-five.

Some Kentucky fans responded by calling the Cardinals the "Black Birds."