From Nassau to New Orleans: Louisville is Headed to the Final Four

Share All sharing options for: From Nassau to New Orleans: Louisville is Headed to the Final Four

We arrived in Nassau - the capital of The Bahamas - in the early afternoon, a day before the games would begin. I remember it being an ordinary and rather uneventful day. We did all the usual things people do when they arrive in a hotel. Suitcases were unpacked and arrangements were made for dinner. That evening, after my family had gone to bed, I got the computer out and engaged in what would become my nightly routine after every game at the Kendal Isaacs Center. I went to the bar, ordered a few Kaliks, and began to write. The first step was the headline. After thinking about it, there was only one I thought was fitting: "The Road to the Final Four Begins in Nassau."

Now, months later and after a roller coaster of a season, the road actually ended where we all had hoped it would: New Orleans. For the second time in my conscious existence, Louisville has accomplished a crowning achievement and did so after an embattled season, with many doubting its players and coach. It's safe to say that during the previous three weeks, these players and their coach have put these concerns to rest.

A few hours before the game yesterday, I received a text from my brother, who is now living in Washington DC after three years of law school at UofL. "My god man, I am so nervous, they can't lose today." Unlike Drew, I actually had found myself not thinking about the upcoming game, but just how far this team had come since its island journey in August. "I was actually just thinking about watching them in the Bahamas. I can't believe they are a game away from the Final Four."

Several things about August Basketball stick out now more than ever after watching the team progress through the season. When thinking about the trip, the first person that comes to mind is Russ Smith, who was the subject of several rumors before the start of the season. When the summer began, many wondered whether or not Russ would even be playing basketball for Louisville. Steve Masiello had left for Manhattan, and some wondered whether Russ would follow due to a perceived lack of playing time for Pitino's team. Thankfully, Russ stayed put. 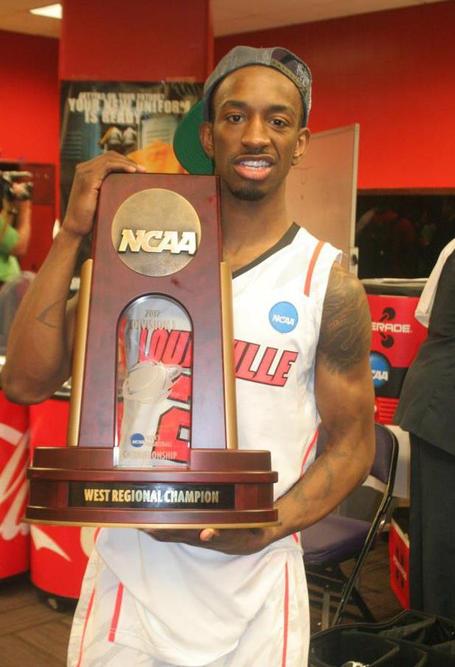 Towards the end of July and in the early part of August, rumblings or Russ's performance elevating to new levels began to percolate. At the small gym in Nassau, Russ put together some impressive scoring performances and the thought crossed my mind that he might actually be an integral part of this season. I immediately put that idea to rest, believing others would probably be more deserving of the minutes. Fortunately, I was wrong.

The other thing that has continually crossed my mind is meeting Chane Behanan. I remember Chane walking into the gym that night and thinking "well, our problems rebounding the ball are over." To say I was blown away by just looking at him would be an understatement. Guy was a monster and I was excited. I can remember Mike telling everyone to cool their expectations on Behanan after I had basically anointed him as the second coming of Charles Barkley. Sorry dude, got excited.

I think about these two guys and then wonder where we would have been without them yesterday. This team was dead and I was already trying to prepare myself for a loss. "We've got everyone coming back and we can make another run next year. It will be ok." Because of Russ Smith, Chane Behanan, and an amazing overall defensive performance from the entire team down the stretch, that didn't happen.

It also didn't happen because Louisville has Rick Pitino. When Pitino was hired, I found myself less interested in Louisville basketball than in the past. Although many had bought in and began taunting Kentucky by wearing the "Got Pitino?" shirts, I wasn't necessarily thrilled with what we had received. I loved Crum and wanted nothing more than for him to go out on top. When that didn't happen, I was terribly disappointed.

The expectations for Pitino were astronomical. Many believed it was not a matter of "if", but "when" Louisville would win its first title in almost two decades. In the eleven years since, I've gone from being uncertain to his place on the sidelines to one of his biggest supporters. Others, however, have been uneasy about his perceived lack of tournament success and wondering if Louisville might be better off if a change in leadership was initiated.

I wrote in Nassau that this would be a defining season for Pitino. It had been two years since the team had made it out of the first round and the team needed to have some type of post season achievement, however slight. After a somewhat disappointing regular season full of tremendous ups and devastating downs, Louisville won the Big East Tournament at the Garden. However, I still wasn't satisfied and just hoped for a few wins in Portland.

Four wins later, Louisville is in the Final Four and no one deserves more credit than Rick Pitino. Simply put, no one has done more with less this basketball season. I have always believed Louisville and Pitino to be intertwined, one needing the other to succeed for each's own validation. For Pitino and his Program, the question would always be that after so much success at Kentucky, why didn't he have more post season achievements at Louisville? Now he is back in the Final Four, with an unconventional cast of characters who have an undeniable will to win. There isn't a coach in the country I would rather have than Rick Pitino and I want nothing more for him to succeed at Louisville at the highest level moving forward. We are lucky to have him. 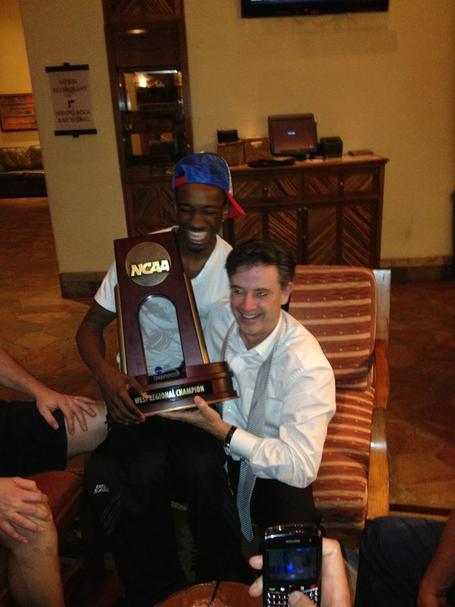 One of the lasting memories I will have of Nassau was meeting the players. This team's character has become its staple and its why so many fans have chosen to call it their favorite. No one exemplified this more in the Bahamas than Jared Swopshire. At that time, Swop was still recovering from injury and was more accessible than the others given his permanent position on the sidelines. My grandparents were able to talk to him many times and I'll never forget my grandfather's general statement after the trip concluded: "I just love that kid, he is just such a great kid." The same basic compliment can be said about all these guys. They achieve on the floor, in the classroom, and in the community. We are lucky to have them as such great ambassadors for the city of Louisville.

It will be Kentucky and Louisville for a trip to play for the National Championship. While this headline will most certainly dominate discussion next week, remember to keep this achievement in perspective. Never take for granted what these guys have just achieved. Next year, Louisville will assuredly hang a banner for a signature accomplishment in its sport. Take a step back and don't take it for granted no matter what occurs on Saturday. Despite all the odds, Louisville has made the Final Four and nothing that happens going forward will ever dilute their accomplishment.

Congratulations to the West Region Champs.