Louisville vs. Florida News And Notes

Share All sharing options for: Louisville vs. Florida News And Notes 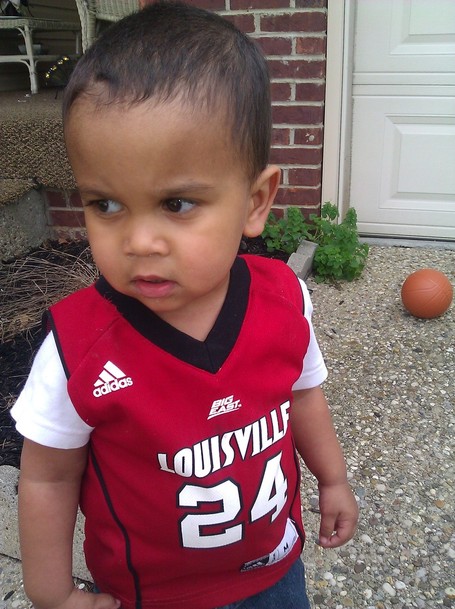 Whatever happens today, just know that I love all of you...about half as much as the Babies 4 Behanan movement.

Quick facts to alleviate your nerves: Rick Pitino is 6-0 against Billy Donovan, and seven seeds are 0-6 in the Elite Eight since 1985.

Cardinal fans in Phoenix will again be meeting at the Arrogant Butcher for a pregame party. The festivities kick-off at 11 a.m. MT (1 p.m. real people time).

There are approximately 8,000 Rick Pitino/Billy Donovan stories that could be linked to, but I think this one by Yahoo's Jeff Eisenberg is the best.

Had Donovan not lost 30 pounds, rededicated himself to basketball and developed into an All-American point guard, Providence never would have made the unlikely 1987 Final Four run that launched Pitino's coaching career. And had Pitino not hired Donovan as a grad assistant at Kentucky, mentored him for five years and urged Marshall, then Florida to make him one of the nation's youngest head coaches, Donovan's smooth path to the peak of the profession would have been far bumpier.

"I think about it all the time, 'Would Billy Donovan be here at Florida today if I'd transferred from Providence or if Rick Pitino didn't take the job?'" Donovan said Wednesday. "Where would I be? Maybe I'd be down on Wall Street. Maybe I'd be doing something else. Who knows what I'd be doing? But I feel very fortunate Rick Pitino came into my life."

I woke up to a direct message from Kevin Harned on Twitter saying he'll be rooting for the Cards today. In other words, I woke up and proceeded to have the greatest morning of my entire life.

The underrated aspect of the Pitino/Donovan storyline is Richard Pitino, who spent the past two years as an assistant under Donovan before returning to his father's staff this year.

"Growing up, I always heard, 'Billy this or Billy that,'" Richard said with a smile. "My father, my mother, they worship Billy. They treat him like their son. If there's any person they'd want me to learn from, it would be Billy Donovan."

Considering the countless hours Richard spent around basketball growing up and the influence both Donovan and his father had on him, it was hardly shocking when he too decided during college that he wanted to become a coach. As a student at Providence, Richard worked as a team manager under coach Tim Welsh and also as an assistant coach at nearby St. Andrew's School in Barrington, R.I.

Maybe the only person who wasn't thrilled with Richard's chosen career path was Rick Pitino, who worried about his son following in his footsteps. The elder Pitino's experiences with the Boston and New York media as coach of the Celtics and Knicks made him worry whether Richard would be tough enough to endure the criticism that comes with such a high-profile gig.

"I tried to talk all my children out of it, I really did," Rick Pitino said. "Richard said, 'It's no problem, I'm totally ready for it.' And he is ready for it. I hope some day he turns out like a Billy Donovan. That would be awesome. "

I just peed my pants.

Putting up big numbers has been Florida's M.O. all season, but it's the Gators' defense in the tournament that has them one win away from the Final Four.

For a team known for scoring and shooting that normally would be an alarming statistic were it not for another number that is positively astounding -- and the reason the Gators (26-10) will face Louisville (29-9) in the NCAA West Region championship game Saturday at 4:30 p.m. EST for the right to go to the Final Four.

In ousting 10th-seeded Virginia, 15th-seeded Norfolk State and, most recently, third-seeded Marquette in Thursday night's regional semifinal, UF has put together a trio of smothering defensive efforts, allowing its NCAA foes to shoot a combined 31.5 percent from the floor and 20.6 from 3-point range. Along the way, the Gators also out-rebounded those teams by an average of 11.3 per game.

"It's not really what I envisioned for this team," junior guard and leading scorer Kenny Boynton said. "But I'm OK with it. We're winning."

Defense is why they're winning. It's certainly not because of their long-range shooting, having taken 78 and made only 21 through the Sweet 16 round, including a 7-for-27 effort in the win over Marquette.

Ken Pomeroy's prediction is Florida by 1.

The Sporting News' Ryan Fagan also believes the Gators might have Louisville's number.

Bottom line: The prevailing storyline leading into the game, without a doubt, will be about how close the coaches - Louisville's Rick Pitino and Florida's Billy Donovan - are and how intertwined their lives have been. But remember, it's the players who will determine the outcome of the game. If Florida can stay strong with the basketball and disciplined with its shots, don't be surprised to see the seventh-seeded Gators slip into the Final Four.

2) Is Brad Beal exploding before our very eyes? Beal is easily the most talented player on the floor for either team. He has 49 points and 26 rebounds in three NCAA games while taking just 26 shots. Florida is making better use of out-of-bounds and out-of-timeout situations to get him the shots that sometimes don't come organically in the Gators' offense. If the Florida 3-point shooters are making some jump shots, Beal should have more and more room to attack as the zone has to extend.

3) Will Louisville need to win the game with its *offense*? That may be overstating it, but the Cardinals will have to find a way to score. They're not capable of winning a shootout. Some offense will have to come in transition off defensive stops, but Florida is not a great defensive team by any stretch of the imagination, and Louisville should be able to get something done inside. They should have a mismatch with whomever is not being checked by Patric Young. If that's Chane Behanon, all the better. Russ Smith also has been percolating and is due for an explosion. This could be the right kind of game and opponent for him.

I don't know if I'm going to make it, guys. Human beings aren't supposed to be this nervous about things they can't (technically) control.

ESPN's Eamonn Brennan thinks Chane Behanan will have to be as good as he was on Thursday for the Cards to have a shot.

Chane Behanan, Louisville: The freshman was brilliant in Thursday's win, scoring 15 points, grabbing 9 rebounds and swiping 3 steals, and perhaps most impressive -- especially against one of the best defenses in the country in Michigan State -- was Behanan's calm, collected interior finishing. The Cardinals may need it again. Louisville isn't likely to shoot the ball well, especially against a Florida team with the quickness to keep up on the perimeter, and Dieng will likely neutralize much of what Gators big man Patric Young tries to do in the low block. Behanan, however, can be a matchup nightmare, too big for Beal, too quick and strong for Erik Murphy. He's a tweener -- and he might be the Cardinals' best hope of putting something resembling an efficient offensive performance together Friday night.

When is tip-off again?

Louisville will again need Gorgui Dieng to be a difference maker today.

The Cardinals will likely need another performance like that for Pitino to have a shot at beating his protege, Donovan.

And, unlike last year when he had very little idea of what the NCAA tournament was about, much less understand things like Sweet 16 and Elite Eight, he's caught up in the madness of March and ready to do the single thing he cares about when it comes to basketball: win.

"Last year, I had no idea - I didn't know a lot of things about this tournament,'' Dieng said. "Now, I know it's fun and I understand there's six games to get to the national championship and if you don't win, you go home. That's the most important thing is to understand that.''

Dieng's understanding of that and so much more has made a huge difference for Pitino and the Cardinals. Not bad for a skinny kid who was nowhere on his coach's radar less than three years ago.

Larry O'Bannon is confident, and that's enough for me.

Through three rounds, Florida has allowed the third-least amount of points of any tournament team since the institution of the shot clock in 1986. The two teams above them each won their Elite Eight game and moved on to the Final Four.

Louisville's zone defense and tight press have been difficult for teams to overcome. The Cardinals are +7 in turnover differential in their first three games. The Gators are averaging 12 turnovers per game in the tournament and have committed more turnovers than they've forced (36-30).

Despite the turnover differential, Donovan's Gators have taken their defense to another level through the Sweet 16.

On Thursday, Marquette was the first team to score more than 50 points against Florida, which has allowed a TOTAL of 153 points in reaching the West Regional Final.

Entering the tournament, Florida led the nation in 3-point field goals made, averaging 9.9 per game. In the first three games, the Gators are averaging seven 3-pointers made per game but are shooting less than 27 percent behind the arc (21-for-78). During the regular season, Florida shot almost 39 percent on threes.

That could loom large today considering how strong Louisville's 3-point defense has been thus far. Its three opponents -- Davidson, New Mexico and Michigan State -- were a combined 14-63 (22.2 percent) on threes.