Share All sharing options for: Top Seeds Struggle, Survive And Advance To Elite 8

It wasn't easy for any of them, but when the dust settled on Friday night three of college basketball's premier programs -- plus Baylor -- had advanced to the Elite Eight.

We should be in for two tremendous days of regional final action, but before we move on to that we have to first look at how the field was solidified on Friday night.

Yes, we have to. You can have a Twix when we're done. Two Twixes? You cheeky little bastard.

Ohio was probably one made free-throw or one decent performance from becoming the first 13 seed to ever advance past the Sweet 16.

Bobcat guard Walter Offutt picked up the slack for D.J. Cooper's poor play all night, but he missed a freebie with 25 seconds left in regulation that would have given OU a one-point lead. Ohio kept North Carolina from scoring on the other end, but was outscored 10-2 in the five-minute overtime period.

"One free throw away,'' Offutt said. ``As a leader on this team, I take responsibility that I've got to hit that free throw. ... It just feels terrible to kind of let my team down in that sort of way.''

It's a free-throw that might not have been necessary had Cooper, who came into the game averaging 20 points in the tournament, not gone a horrific 3-of-20 from the field.

Tyler Zeller finished with 20 points and a career-high 22 rebounds for the Tar Heels, who looked nothing like their usual selves without injured point guard Kendall Marshall. UNC had two other players who notched double-doubles for the first time in an NCAA tournament game: Reggie Bullock had 17 points and 10 boards and John Henson had 14 points and 10 rebounds. UNC also got a solid effort from backup floor general Stilman White, who had six assists and zero turnovers in 32 minutes.

Still, it was a nearly disastrous end of the season for Carolina, which moves on to face Kansas in Sunday's Midwest region final.

"We feel like we got away with one,'' Zeller said. "Ohio played the better game, they hit a lot of shots. I think we just were able to make a lot of plays at the end that made us capable of pulling it out.''

The victory was North Carolina's 11th straight in the Sweet 16.

TEAM THAT WON IT THE BEST: Kentucky

Kentucky/Indiana was easily Friday's most entertaining game, even if the Wildcats ultimately finished the evening's highest margin of victory. In a tournament that has been defined by 60-something slugfests, seeing nearly 200 combined points was almost like watching a different sport.

For weeks now, it's been said (rumored?) that the key to beating Kentucky is a hot-shooting night and getting Anthony Davis into foul trouble. The freshman All-American sat for the bulk of the first half and the Hoosiers shot 52.2 percent for the game...and they lost by 12.

The Wildcats took shot after shot from IU and responded with a basket of their own that appeared to almost dishearteningly easy. Most impressive of all, however, might have been that Kentucky was a near-perfect 35-of-37 (94.6 percent) from the free-throw line.

It appears that it's going to take a similarly near-perfect performance for UK to fall at some point over the next nine days.

Yes, they won, but that was an effort that wouldn't have beaten any of the seven other remaining teams. Thomas Robinson was his standard 18 and 15 self and Jeff Withey had 10 blocks, but Tyshawn Taylor was atrocious and the Jayhawks shot just 7.1 percent from three and 55 percent from the free-throw line. And yet, they had the game won with an eight-point lead and just under two minutes to play before allowing N.C. State to go on a 7-0 run and nearly steal the win.

Taylor and Robinson, the team's two leaders and best players, both missed front ends of one-and-ones in the final minute that would have ended things. Not a great sign heading into Sunday's showdown with North Carolina.

Made up for the absence of Kendall Marshall and the disappearance of Harrison Barnes by scoring 20 points to go with a remarkable 22 rebounds. Zeller's 20-20 performance was the NCAA Tournament's first since Tim Duncan achieved the feat in 1997.

Dominated Xavier on the inside to the tune of 20 points, 15 rebounds and 34 dunks. Don't fact check that last number, just go with it.

Scored a night-high 27 points against the top overall seed in the tournament.

Stepped up huge for Kentucky with potential national player of the year Anthony Davis in foul trouble, scoring a team-high 24 points to go with ten rebounds. He also buried all ten of his free-throws.

Hit six threes and scored a game-high 26 points in Ohio's near upset of No. 1 seed North Carolina.

It was a banner night for crazy Calipari reaction shots, but this screen grab and GIF take the (terrifying) cake. 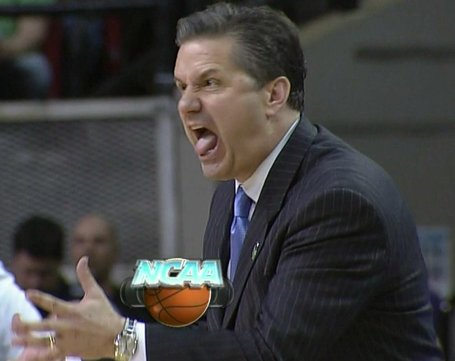 Try going back to bed now.

Ohio's leading scorer averaged 20 points in the first weekend of the tournament, but scored just 10 while shooting 3-for-20 against North Carolina. He also complained about a foul call in the final minute of regulation instead of hustling back on defense, which allowed the Tar Heels to hit a go-ahead three-pointer. An average night from Cooper and the Bobcats are probably a game away from the Final Four.

That's how you drop 102 on someone in a regional semifinal.

You can shoot 70% and you're still not going to beat this crop of Wildcats playing that way.

Because everyone loves when you experiment with wacky camera angles during the second-to-last weekend of the season, especially when the result is the viewer trying to watch something extremely important while feeling like they're dangling from the world's slowest and shittiest zip-line.

The Jayhawks hit just 1-of-14 three-point attempts and became the first team since Pittsburgh in 2004 to win back-to-back NCAA Tournament games with an effective field goal percentage below 40 percent in each game. It's hard to imagine that trend continuing against North Carolina on Sunday.

He had 34, but you already knew which one I was talking about.

Harrison Barnes was expected to be the one stepping up with point guard Kendall Marshall on the sidelines, but instead the preseason All-American scored just seven points in regulation and finished with just 12. Thankfully, Tyler Zeller was there to don the cape and finish with a remarkable 20-point, 22-rebound game to help the Heels avoid the massive upset. The 20-20 performance was the tournament's first since Tim Duncan achieved the feat at Wake Forest in 1997. Decent company.

There should absolutely be a trollin' kids edition of "One Shining Moment" at the end of this tournament.

She told you, bro.

It might be the least cool or composed thing I've ever seen, but it gets a "cheer" because it makes me laugh. Take notes, ladies.

He could totally cram on Messi. More than once even.