Louisville vs. Florida Numbers And Notes

Share All sharing options for: Louisville vs. Florida Numbers And Notes

Ok, this game is going to happen whether we're ready or not, so let's calm down, let's get our minds right, and let's---oh my God, I forgot to start the dish washer last night. No way Boynton scores less than 25 now. 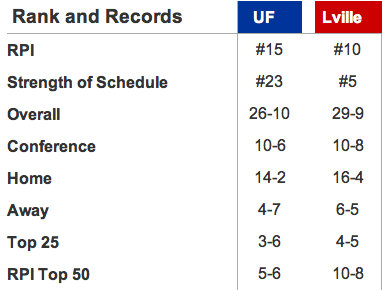 --Louisville will be looking to advance to its ninth NCAA Final Four on Saturday. Louisville is tied for seventh in NCAA Final Four appearances, last reaching that plateau in 2005. The Cards have reached the Sweet 16 on 18 occasions and have advanced to the Elite Eight three of the last five seasons. Only seven coaches have coached more Final Four teams than Pitino's five, a feat matched by four others. Pitino is the first coach to lead three different teams to the Final Four. Louisville's NCAA Final Four teams: 1959, 1972, 1975, 1980, 1982, 1983, 1986, 2005.

--This is the 12th occasion the Cardinals have reached the NCAA Elite Eight. Louisville has an 8-3 record in regional championship games. UofL advanced to its 1986 NCAA Championship by way of the West Region, reached its 2005 Final Four through the West, and have a collective 14-5 record in that region. Louisville has a 3-1 record when facing a No. 7 seed in the NCAA Tournament (1980, 1986, 2004, 2005). The Cardinals improved to 13-7 when playing as a No. 4 seed. Louisville is 40-8 in NCAA Tournament play when the Cards are the higher seed as it will be in Saturday's game vs. No. 7 seed Florida. U of L Coach Rick Pitino has a 32-6 record when his team is the higher seed in NCAA Tournament action.

--U of L Coach Rick Pitino improved to 10-0 in NCAA regional semifinal games with the Cardinals' victory over Michigan State. His 41-15 record in NCAA Tournament competition (.732) is sixth in winning percentage among active coaches. He is fifth among active coaches in NCAA Tournament victories. Pitino has a 5-4 record in regional
championship games and has reached the Elite Eight for the third time in the last five years (fourth time in the last eight years). Pitino has a collective 108-39 record during the month of March (.735). He is the first coach to guide three different schools to the NCAA Final Four. He is one of 12 finalists considered for induction into the Naismith Memorial Basketball Hall of Fame, and the class will be announced on April 2.

--Louisville has a 7-1 series advantage over Florida. The Cardinals have won the last five meetings.

--Rick Pitino owns a 6-0 record over Florida coach Billy Donovan, who played for Pitino at Providence.