We already kind of covered what would have been the introduction earlier, so let's dive straight into the Cardinal heads.

Michigan State's 44 points against Louisville was the lowest output by a No. 1 seed in the NCAA Tournament since the institution of the shot clock. It was a defensive effort moved U of L up to No. 1 in Ken Pomeroy's defensive efficiency rankings.

More on the remarkable defensive performance from the folks at Basketball Prospectus.

In case you weren't aware, the Cardinals are pretty good at this thing called "scoring prevention." The Spartans could only muster 0.73 points per possession after exceeding 1.08 in each of the past five contests. Meanwhile, the 0.73 was the 11th consecutive sub-1.00 performance by a Louisville opponent. The explanation was simple. The Spartans couldn't shoot (effective FG percentage: 34), couldn't hang onto the ball (turnover percentage: 25), and didn't grab many of their own misses (offensive rebound percentage: 22). That is not a recipe for success. Draymond Green, so effective through the first weekend, could muster only 13 points on 16 shots, going 1-for-7 from three. Gorgui Dieng had a lot to do with Michigan State's ineptitude, blocking seven shots and altering many others. The Cardinals weren't exactly a juggernaut on offense themselves, but their 0.94 points per possession were plenty good enough, thanks largely to shooting 39 percent on 23 threes.

It's becoming pretty apparent that we spent far too much of the past couple of months talking about who wasn't making shots, and not nearly enough recognizing that this is probably the best defensive team we've ever followed.

So last night's win moved Rick Pitino to 10-0 all-time in the Sweet 16, including a 4-0 mark against better-seeded teams. The only downer was that the 13-point win caused his previous average margin of victory in the round (23 points) to dip.

Seriously though, those are absolutely absurd numbers.

You want to know what set the tone? Fly-Swatting Wayne during the video of Pitino's pregame talk.

That's when I knew we were going to be Ok.

The numbers weren't staggering outside of the seven blocks, but it legitimately looked last night like we had the All-American on the floor in Gorgui Dieng. There were a couple of times when Michigan State guards drove to the basket and I started laughing before they even left their feet to get blocked.

Easily the best was the Keith Appling swat about 17 rows into the stands followed by Gorgui helping him up and then smacking him on the ass.

Legitimately might be the most popular person in Louisville, and deservedly so.

I tweeted again last night about my desire for there to be a Gorgui statue placed prominently somewhere in this city. The best responses I got were: 1) A gigantic Gorgui statue in the river holding up the new bridge; 2) Miniature Gorguis all over town like those horses that are everywhere; 3) Gorgui's face carved into the front of the Humana building.

Personally, I'm for all three happening before the start of next season, but I'll settle for one.

Don't know if you caught it, but a commercial featuring lawn gnomes popped up out of friggin' nowhere in the middle of the second half. If we can survive that, then we have nothing to fear.

Love this shot from Eric Crawford of Pitino watching the Florida/Marquette game in the U of L locker room. 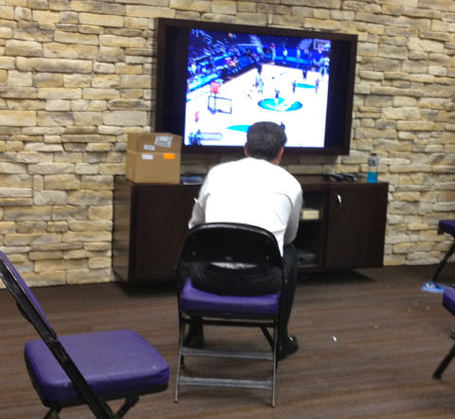 He just doesn't have that same fire, you guys.

Russ Smith attempted to charm official Patrick Driscoll after he drove the lane and the contact from forward Adreian Payne left him on the ground. Coming out of a timeout, Smith approached Driscoll and both came away laughing.

"I went to the basket and Adreian Payne just shoved me," Smith said. "Like, that was ridiculous. I was like, ‘Dag' and then I told him that was probably the makeup no-call for all the times that I done flopped so that was a great call."

Remember earlier this year when I wrote that I wanted to start saying "dag" more? Ok, well I did.

When you mention our relationship in writing or in words, you shall refer to us as "Russeford." 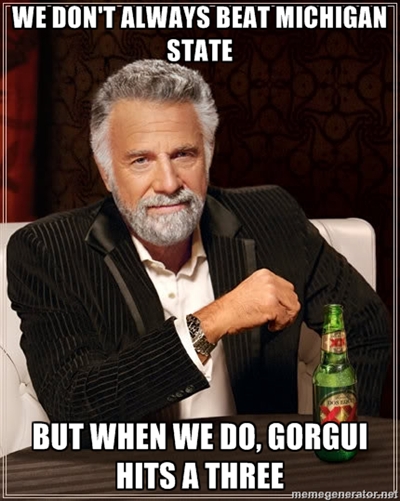 People forget, but Gorgui stroked a three without hesitation in his first exhibition game last season. This kid can do it all folks (John Candy, Rookie of the Year).

After the game Gorgui said that he'd been making a lot of threes during shoot-arounds and that Pitino told him he could shoot them next year if he proves he can make them consistently. The Gorgster said after he buried that one he came to the bench and said, "sorry coach, I thought it was next year."

Get over here and give me a hug.

I've loved seeing more of his kharacter in recent weeks.

We needed Chane to step up in a major way and he probably played his best game of the season. He obviously gave a tremendous effort on the boards, but he also did a much better job of finishing around the basket, and converted on a couple of possessions where we badly needed scores.

Biggest play of the game, I thought, was when State had cut the lead to 35-31 on that follow-up dunk and Siva responded by finding Chane for an easy score with just a couple of seconds left on that shot clock. It looked like that possession was going nowhere and that MSU was going to get the ball back with all the momentum in the world, but that find and finish were a huge relief.

Post-loss couch-burning? Come on, East Lansing. Grow up. You got Gorgui'd. It f---ing happens.

I could not have been more worried about eventually getting Izzo'd, by the way. When they came out and hit a three right away to start the second half, all I could think was "what did you do, you genius bastard?" But every time State did something new that worked we countered with an adjustment that worked even better.

Rick Pitino was two steps ahead of Tom Izzo on this night. There's zero question about it.

Chris Smith stepped up in a major way. He went 3-for-6 from beyond the arc, helped out on the glass and provided great on-ball pressure that accounted for at least two turnovers. That exactly the type of solid, all-around, veteran effort that this team has to have from him.

Peyton Siva did not have a great shooting night, but he did have nine assists and the ball was in his hands for the bulk of the 35 minutes he spent on the floor. Every now and then when you see pressure from opposing defenses you stop and think about how nice it is to have such a sure-handed floor general. Yes, he gets out-of-control and makes poor decisions from time-to-time, but when it comes to pure ball-handling skill Siva's right up there with the best, and that's huge at this point in the tournament.

A quick tip of the cap to the officials for letting the boys play last night. It might have been the least amount of beef I've had with a crew all season.

New documentary coming out on Card Chronicle's March of 2012: 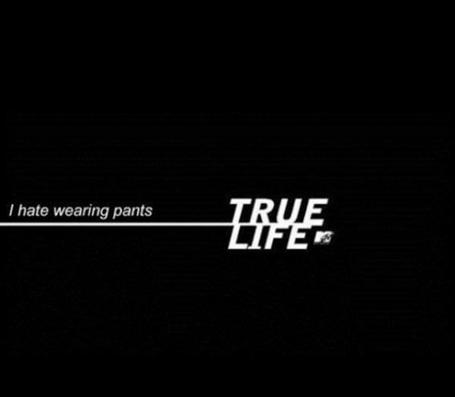 Really think we just need Wayne to hit his first shot. He's actually looking far more comfortable on defense right now than he is on offense, which couldn't a further cry from his debut against West Virginia.

Louisville wins a national title, and I'll be pretty easy to spot at Derby. 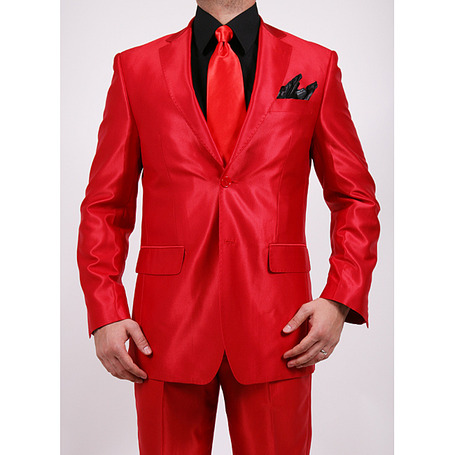 That's infra enough, right? And 80 bucks? Are you kidding? I would have given minor body parts.

Kyle's still due for a breakout shooting game. Someone just has to tell him to aim long. Literally every single time he misses, it's short.

When Russ ended up with Austin Thornton on him during that possession late in the first half, there was a 107% chance that he was going to try to cross him up and then bury a step-back jumper. It worked.

Russell Mania did not, however, record a steal in the game, which means he's still three shy of breaking the U of L single-season record.

Apparently Draymond Green was talking some trash (and punching our players) during the game. Chris Smith's response? "It motivated me a lot...you talk trash to me, you're in for a long day...let's take their money"

Seth Davis and Steve Smith both seemed to believe that Michigan State would win by about 50 last night. They also both picked the Cards to lose to Florida later in the evening.

That sits just fine with me.

Oh, and how could we forget? 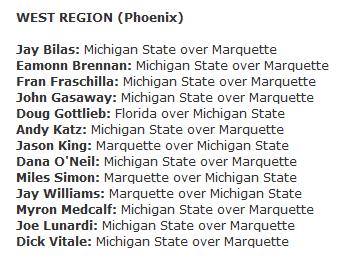 It's also worth noting that Louisville opened as a 1-point underdog to Florida.

An update on the Cards' three-point defense in the postseason:

A Michigan State fan wrote to me yesterday and called me an "idiot" for "assuming" that Muhammad Ali would be coming to the game to cheer for Louisville. He went on and on about Ali's relationship with Izzo and how he has a house in Michigan and is always welcome in the Spartan locker room.

I didn't even respond. 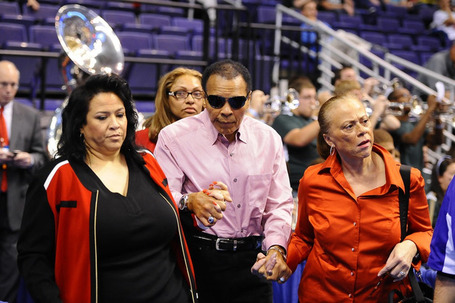 Not going to lie, Florida terrifies me. They're the type of team that can put up points even when you defend the hell out of them, which is obviously a concern for us.

Positive: Rick Pitino is 6-0 against Billy Donovan and his son was an assistant at UF for the past two seasons.

Negative: They have four guys who can hit from anywhere regardless of how well they're being guarded.

Positive: They haven't shot the ball particularly well this postseason.

Positive: We have Gorgui Dieng

Negative: As the better seed we don't get to wear the all infra-reds.

Loved seeing the Izzo dry erase board before the game and what he had written about every player.

I was praying for "Elisha Justice: Nicknamed 'Bullet,' Hottest Male Athlete in the World, do not stare at directly."

It wasn't on there though.

You'll be forgiven when I have my prize in hand...or cage...yes, I'm hoping for an animal.

The 2009 Big East Tournament champions t-shirt is tucked neatly into drawer four of my dresser, where it will remain until 3:30 tomorrow afternoon.

It's been seven games, the same clothes (Nate Dogg voice).

Two weeks ago we were terrified of losing to Seton Hall and being relegated to a seven or eight seed in the NCAA Tournament. Right now, we're one win away from the ninth Final Four appearance in Louisville basketball history.

This is too much fun to end now.