Cards In The Elite 8: Loyal Louisville Fans Reap Their Reward On The Morning After

Share All sharing options for: Cards In The Elite 8: Loyal Louisville Fans Reap Their Reward On The Morning After

For those of us who go all in on this four-month adventure each and every year, few feelings in life can top this morning's.

About a minute into my morning commute, "We Found Love (In a Gorgui Place)" popped up on the radio. Of course it did. I drove, I sang, I smiled, I think at one point I high-fived a squirrel wearing a tiny Chane Behanan jersey.

There may be no sun, there may be plenty of rain, but dammit, the Louisville Cardinals are one of the last 12 teams in the country still playing in the NCAA Tournament. That's better than the clearest sunrise in the world's most exotic location. 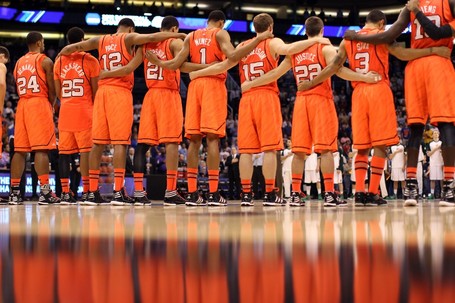 Now we get all day to bask in this glow and enjoy watching fans of other teams go through what we went through on Thursday and will (thankfully) go through again tomorrow.

These are the good times. And I'm just going to go ahead and say it: we deserve this. With all the shit that has taken place since that 2009 Michigan State game, we have absolutely earned everything that has happened this month and anything else good that might happen over the next couple of weeks.

Saint Mary's coach Randy Bennett had a really terrific quote after his team lost to Purdue in the second round last week:

"If it didn't sting, it wouldn't be any fun. That's why it stings, because you care so much. There aren't many things you can pour your heart into with a bunch of guys your age and invest so much time and care so much, and that's why it hurts, because when it's over it's gone."

It would have been so easy to have said "whatever" at various points over the past three years, to have told everyone taking shots at you that you never even cared that much, and then to be hopping back on the bandwagon right now. I don't think many people reading this did that, and credit yourself for continuing to care and in turn leaving yourself vulnerable to the hurt.

The injuries, the off-the-court-drama, the unexpected departures, the round of 64 losses, the surprising defeats in the regular season; we still never stopped caring. This is an earned reward, and it might be not be the last one.

Let's just go ahead and win the whole damn thing.