Share All sharing options for: Louisville vs. Michigan State News And Notes 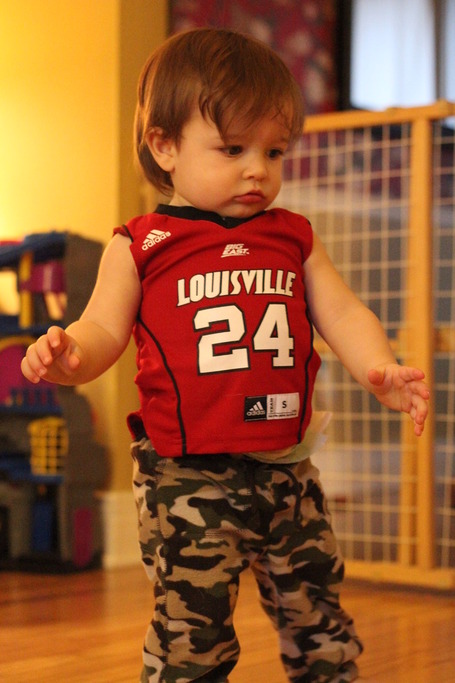 If you were thinking the sole reason for this post was to get another good luck Babies 4 Behanan pic out there, well you could not be more right.

Wait, do salt shakers belong in the refrigerator? No, they don't.

Not one of ESPN's 13 experts has Louisville beating Michigan State.

Thursday night's game figures to be a classic matchup of speed vs. size.

Simply put? Size versus speed. Take it away, Coach Izzo ...

"Seeing [the pressure] on film and hearing it from a coach or hearing it from another player, and all of a sudden getting in one of those traps and having to get the ball out is a little different," Izzo said. "So we try to do what we can do. But we have played a million different styles. That's not going to be an excuse for this team. We're going to take care of the ball and make some shots and make sure that our defense doesn't let them get a lot of layups and make some shots -- or we're not. And I think that's what the game is going to come down to.

"They've got to handle our physical size inside and we've got to handle their pressure outside. That's what basketball is about, is the matchups, and who exploits whose, and who plays better against whose strengths will probably determine the winner."

I saw this headline and for an instant was excited about the possibility that it might be some other-worldly sign from the future.

The Detroit free press sees zero advantages for Louisville over Michigan State, and believes the Spartans have the edge in terms of frontcourt, intangibles and coaching. They say all that adds up to a 68-63 win for MSU.

Louisville has struggled to rebound on the defensive end all season, and that could be a killer against a Michigan State team that thrives on hurting opponents with second chance points.

Louisville's main weakness on defense comes from their inability to consistently rebound on defense; the Cardinals allow opponents to recoup 34.2% of their misses, good for 255th in the NCAA. When Michigan State misses shots (and they will, the Cardinals' two-point defense is fourth best in the nation at 41.6%, and while three-point defense can be random Louisville's 17th at 30.2%) they'll need Green, Derrick Nix, Adreian Payne et al. to convert second chances. Obvious point is obvious -- Branden Dawson would've been really, really good to have in this game.

We found love in a Gorgui place.

Russ Smith is still getting national love, this time from USA Today.

"He always comes up big for us," Pitino says. "When we struggle for points, he's always there. I'm real proud of him."

Louisville struggled big-time offensively Saturday against New Mexico, and Smith was there to help in his own, unpredictable fashion, hitting three three-pointers without a miss.

He is a 29.9% three-point shooter for the season. In the seven games before his sudden marksmanship against New Mexico, he had made two of 17 threes (11.8%).

Smith doesn't start and is sixth in minutes played for the Cardinals but is first in field goals attempted. His scoring average of 11.4 is second to forward Kyle Kuric's 13.0.

Does Smith have any clue the kind of game that awaits him when he suits up?

"I just try to do what I feel the team needs at the time. And hopefully it will just work out."

You just have to hope all this attention isn't going to make Russ abandon the offensive poise that got him here in the first place.

Draymond Green might be the best overall player in the country right now, but that doesn't mean he's used to handling all the attention.

After hearing his name in the conversation not only for Big Ten player of the year, but also for the national awards, Green said he "wasn't himself." He had seen the buzz on Twitter. Even if it didn't show on the court, he was struggling to handle success. All the attention, Green said, bothered him as a person.

"I'm sitting there thinking what can possibly happen, what can possibly go wrong. It was really stopping me from being me, being the happy person that I am around my teammates, just always having a smile on my face."

Izzo told Green the story of Jason Richardson, who struggled with outside influences. Back then, Izzo asked Richardson if he was OK. Richardson said yes, but ultimately conceded that he was having trouble with all the attention.

"I don't believe nobody no more," Izzo said. "I don't think anybody can handle-- I have trouble handling success. I think everybody does.

Upsetting Michigan State in the NCAA Tournament has been one of the hardest things to do in college basketball since Tom Izzo has been there.

Michigan State freshmen Travis Trice and Brandan Carney are still learning how to cope with the bright lights of the big dance. 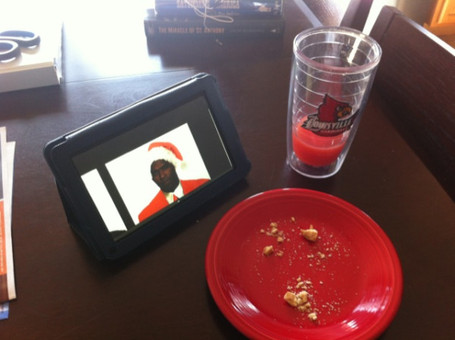 He sees you when you're sleeping. He knows when you're awake. He doesn't really give a s--t if you've been bad or good because he's pretty much doing to do whatever he wants regardless.

The key to Michigan State's surprising resurgence this season has been a return to the fundamentals of "Izzo Ball."

Michael Bush has agreed to a four-year deal with the Chicago Bears worth a reported $14 million, $7 million of which is guaranteed. He and Matt Forte should compliment one another nicely.

Cardinal alumni and fans in New York will apparently be watching tonight's game at Tavern on Third, which is located at 380 3rd Ave. btwn 27th & 28th.

The Louisville softball team swept a double header with Ohio State by a combined score of 14-2 to move to 24-0 on the season.

The baseball team thought what the ladies did was cute and opted to beat the Buckeyes 20-0. The win raised U of L's record to 15-6.

Tree destruction is the Lexington answer to couch burning. 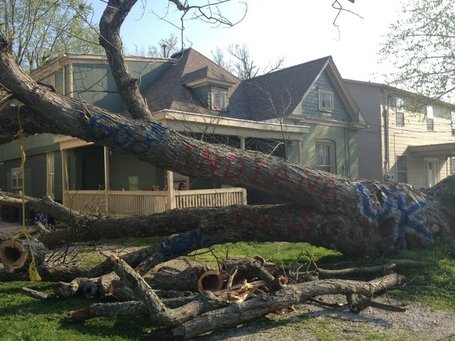 The Bellarmine University fighting Mike Rutherfords are back in the D-II Final Four after a hard-nosed win Wednesday night and will be back in action on Thursday. Here's a good look at the Knights through the eyes of their team priest.

Did you know Rick Pitino was undefeated in the Sweet 16?

You can't keep the media away from Jared Swopshire in March. 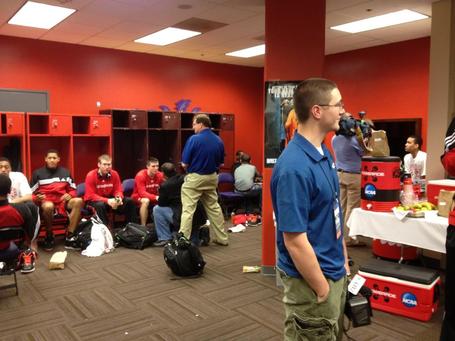 My God, that voice.