Yes, Louisville, There Is A Santa Strong

Share All sharing options for: Yes, Louisville, There Is A Santa Strong

The Louisville basketball team has a secret. Or should I say, had a secret.

The same Cardinals that couldn't buy an outside shot and lost three of their last four regular season games are suddenly Big East champions bound for a Sweet 16 showdown with No. 1 seed Michigan State on Thursday night.

Following last Saturday's round of 32 win over fifth-seeded New Mexico, head coach Rick Pitino deferred all credit to a source most of country probably hadn't heard of.

The name isn't mean to fool you. Santa Strong - an image of Louisville football coach Charlie Strong modified to depict him wearing the festive hat made famous by Santa Claus - was born during the holiday season of 2010 and subsequently served as the open thread talisman on Card Chronicle for the U of L basketball team's pre-Christmas games. He did his duty so admirably that he was brought back for the same service in 2011.

After helping lead the Cardinals to a pre-Christmas record of 12-0, Santa Strong retired to the Louisville Pole (his magical home, rumored to be somewhere between the Highlands and the East End) where he was expected to remain until late Nov. of 2012. But Strong was among those watching with horror as the Cards dropped five of their next seven games and went from No. 3 in the country to nearly out of both national polls.

So Santa Strong popped into Card Chronicle Headquarters on the morning of Jan. 20 to let owner Mike Rutherford know that he wanted back in the game. Rutherford, to put it mildly, was surprised.

"Hell no I wasn't ready for that," said Rutherford, slouching in an oversized chair and wearing sunglasses and a Louisville Titelist hat tilted slightly to the left. "You don't expect to see the Easter Bunny in September. Don't expect to see the Thanksgiving Panda in February. What? You guys didn't get visits from the Thanksgiving Panda growing up? Seriously? Goddammit, mom."

The particulars of the meeting are disputed - Rutherford says the two debated for hours, Santa Strong says "there was no conversation" - but somehow it was agreed Santa Strong would get the call for that Saturday night's game at Pittsburgh.

Louisville won. Convincingly. And just like that, it was Christmas in January...and February...and March in the Derby City. 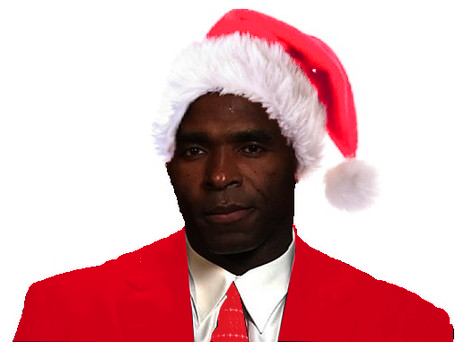 Sparked by the re-emergence of Santa Strong, Louisville ripped off six straight wins and played its way back towards the top of the Big East standings. But then, a speed bump. With SS on the thread, the Cards were dealt a 52-51 home loss by Syracuse.

Ordinarily, a one-point defeat to a then once-beaten and second-ranked SU squad wouldn't be a major cause for concern, but Santa Strong's standards aren't exactly what you would call ordinary.

The good luck charm went haywire after the game.

Santa Strong took a quick breather before being brought back for a shaky three-point home win over Pitt on Feb. 26. After the Cards dropped their final two games of the regular season, it was decision time.

"He had the standout resume, there's no question about that," Rutherford said. "But he'd been every bit as shaky as the team in his last two starts, and I just didn't know. Those were some long nights, man. It was a real soul-searching period for both myself and several of my trusted colleagues and closest friends."

"I told him I was in and that was that," said Santa Strong. "He looked like he might start to cry and then he tried to give me a hug. I let him put his arms around me because I felt sort of bad, but no, I didn't reciprocate."

However it happened, the decision again proved to be correct, as Louisville rolled to four wins in four days to capture the Big East championship, and then knocked off Davidson and New Mexico to advance to the Sweet 16 for the first time since 2009.

Santa Strong's overall tale of the tape is, to put it mildly, impressive. With him as the talisman, Louisville is 14-1 overall and now 6-0 in the postseason. Without him, the Cards are a pedestrian 14-8. Santa Strong has helped U of L outscore those 15 opponents by a total of 1,024 to 877, an average margin of victory of just under 10 points.

Statistics are great, but the words of Pitino, the man at the top of the program, might be the ultimate nod of approval and symbol of success.

"My friends back in New York have kept asking me how I stayed so calm during things like the Providence game and the loss on Senior Night. They never know what I'm talking about, but I always just tell them, 'Santa Strong.' I have his picture in my study, on my bedside table, there's one on the dashboard of my car. You can't imagine the confidence that knowing smirk gives me each and every day. You can't imagine it"

It's a confidence that has proved to be contagious, and one which has the city of Louisville hoping for a special weekend from their Cards.

Citizens of Phoenix: Santa Strong is coming to town.