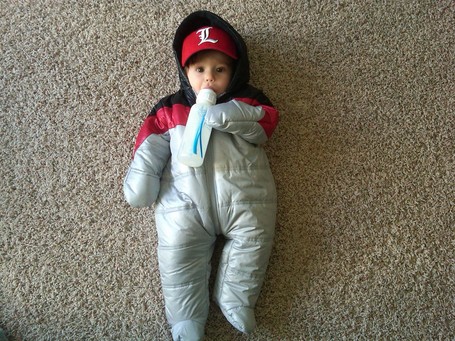 Wayne Blackshear enjoying some down time in Phoenix.

The best thing - or one of the best things - about weeks like this is that it takes on sort of a celebration or festival feel. You see people wearing U of L clothing or flying Cardinal flags, and there's an awesome sense of camaraderie that comes with knowing all of these people are just as excited as you are.

I feel like attached to the privilege of not having to wear big boy clothes to work is an inherent duty to sport Card garb on weeks like this.

I woke up this morning and noticed that I was long overdue for a laundry day, which meant all my go-to Cardwear was unavailable. Even if it were a big regular season game, this situation would normally call for a standard replacement shirt, even if it meant sporting neutral colors. But this is late March, and Louisville has another basketball game to play in a couple of days. Ripped up 2006 Gator Bowl shirt? Pair that ish with jeans and we're out the door.

The Louisville women's team saw its season come to an end Monday night with a 72-68 loss to second-seeded Maryland in the round of 32. Senior guard Becky Burke had a chance to tie the game in the closing seconds, but her three-point attempt was partially blocked. Shoni Schimmel led the Cards with 22 points.

Really good stuff from Yahoo's Dan Wetzel on how this may be the most hate-filled Sweet 16 in the history of the NCAA Tournament.

Rooting against Kentucky coach John Calipari and his roster of future NBA talent is a national phenomenon (they also have arguably the most fans, so it evens out).

Nowhere is this done better than at Louisville, where the old feeling has gained new spice with the battle between Calipari and Cardinals coach Rick Pitino. They exchange pointed one-liners in the media, mock each other privately and generally can't stand each other, which is funny since Pitino recommended Calipari for his first job at Massachusetts, Pitino's alma mater.

Kentucky fans can't stand Pitino, of course. He coached the Wildcats to the 1996 NCAA title but eventually left for the Boston Celtics only to commit the unpardonable sin of returning to the college game to take a job at Kentucky's archrival. As such, nowhere were his personal stumbles more celebrated than in Lexington.

Crean and Pitino are not close, dating back to various battles in the Big East when Crean was at Marquette. And the IU-UL fans, particularly in Southern Indiana, are not friendly unless discussing their mutual distaste for UK.

Louisville and Cincinnati have been fighting since their time in the Metro Conference and the rivalry continues to this day, and the fans' animosity for each other remains constant even though both share a common bond: getting left behind in conference re-shuffling.

Cincinnati coach Mick Cronin worked for Pitino at Louisville and still calls him "coach Pitino" with great reverence. So at least they like each other.

I got a really bad junior bacon cheeseburger at a Wendy's in Gainesville once and have hated Florida ever since. I mean this bacon could not have been in the oven or microwave or whatever for more than five seconds. Put that in your column, Wentzel.

Cards getting their learn on during study hall in Phoenix (via Drew Deener). 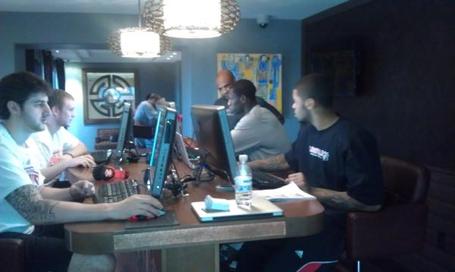 If you're interested in reading the full transcript of Tom Izzo and Draymond Green's comments from Monday's press conference, you can find it here.

I really want infra-red bed sheets. Make a play for once in your damn life, Crate & Barrel.

Back to Day Day Green, Jeff Goodman has a good profile of the All-American, who may be coming into Thursday's game playing better than anyone in the country.

It's all about winning for Green.

The numbers are certainly impressive. The 20 double-doubles this season, the 16.3 points, 10.4 rebounds, the 40 percent shooting from 3-point range and nearly four assists per contest. Green finished with 16 points, 13 rebounds and six assists on the heels of a triple-double in the Spartans tourney-opening win over Long Island.

But the numbers are misleading. They don't begin to tell the story of Green's impact on the court.

An underrated aspect of the win on Saturday was that it sort of saved St. Patrick's Day for Louisville fans. All year long I've remembered March 17 as the day U of L lost to Morehead State, and if the Cards would have gotten bounced by New Mexico then I'm not sure that's a stain the day would have been able to shed anytime soon.

At what point does "We Found Love in a Gorgui Place" actually get recorded? Rihanna does kind of owe us for that whole Marquette game thread debacle.

Also, my new postseason hit is "Wayne, I just met you. And this is crazy..." Google the lyrics, download the track, dance all summer.

So it appears Jeff Teague is the reason his little brother ultimately picked Kentucky over Louisville.

"It seems like they are letting him play a lot faster," said his older brother, Atlanta Hawks guard Jeff Teague. "A lot of time they've got him walking the ball up the floor, but now they're pushing it -- and that fits his style."

That's why Jeff Teague told his younger brother to choose Kentucky over Louisville in the first place.

"That was the school he wanted to go to," Jeff said. "When I told him that I thought he should go to Kentucky, he committed to them right after that. I felt it was the perfect spot for point guards. Nothing against Louisville, but I've never seen a point guard come out of Louisville. I really think he took it to heart."

"That's true," Marquis added. "He was why I chose Kentucky. He had watched John Wall at Madison Square Garden and told me how much freedom they gave him."

Hottest Male Athlete in the World awards mean nothing to the Teague family. Noted.

The Louisville softball team is still a perfect 22-0 with a double header against Ohio State on the docket for Tuesday.

I spent some time yesterday talking to the folks at Big East 360 about Louisville's postseason turnaround and chances against Michigan State. This was right before my body totally crashed and I hibernated for about ten hours, so I can only imagine the recording includes the expected talking-too-fast and even more forgotten details than usual.

A 68-year-old Kentucky fan was arrested at the Yum Center for criminal trespassing during the UK/Iowa State game on Saturday.

Congrats to former U of L soccer star Nick DeLeon, who scored his first career MLS goal for DC United over the weekend. It was also the first goal of the season for United.

You can vote for DeLeon's strike as the MLS goal of the week by clicking here.

Jay Bilas and Hubert Davis loving on the Cards:

Russell and Flow getting "some ink in the local paper."

Late Saturday, someone else asked Smith if this was the best defensive stretch of Louisville's season.

"I'm probably not the best one to answer that," he said. "Probably Coach is. Do you think so, Coach?"

Pitino laughed, nodded, shook his head. "You can answer that," he said.

"I think so," Smith continued. "We really locked into the scouting report. We've been paying attention. Going into the Big East, guys were focused. I think this is the best defensive stretch."

Back and forth they went. When Smith and his teammate Chane Behanan traded barbs on Saturday, Pitino told Smith to be quiet. Smith told Pitino he was O.K., then repeated that, over and over, "I'm O.K., I'm O.K., I'm O.K." Finally, Pitino snapped, "You say it one more time, Russ!"

Smith went quiet, lesson learned, or maybe not. There went Louisville regardless, a team that ranks among Pitino's favorites, the coach and his sophomore guard headed to the next round of the N.C.A.A. tournament, bunny ears and all.

Not into distribution. Gettin' shots crackin'.

With Cincinnati's win over Florida State on Sunday, all three of the new Adidas ultra-light (in Louisville's case, infra-red) uniform teams are into the Sweet 16. Baylor's loss to Missouri in the Big 12 title game and Cincy's loss to the Cards in the Big East championship are the only losses the jerseys have suffered since their introduction.

Specially made for the Sweet 16, check out Adam Lucas' new Cardinal wallpapers featuring every player on the team.

Early bold prediction for Michigan State game: the return of "The Zach Price Special" (one point). Good things generally happen when TZPS is a contributing factor.

I haven't seen or heard anyone talk about this picture from the Davidson game, which is surprising: 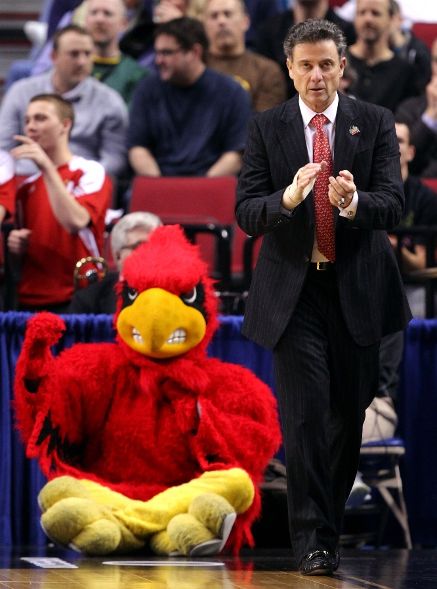 The significance is that it's essentially the complete opposite of the now infamous picture with Pitino and the Cardinal bird from the Morehead State game. Same angle, same location, same arena, same positioning of the two subjects; same everything, except infinitely more happy.

Lots of demons being exorcised right now. Lots of good things happening. Not a lot of pants involved.

The Detroit Free Press talks about how Michigan State will deal with the Louisville press, and the reversal of roles from that 2009 game.

A similar pregame story from the Lansing State Journal.

I don't even have to tell you this is bad, Ohio. You know it's bad. 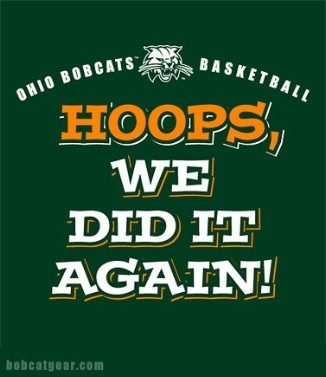 I'm not a mid-major...not yet a national power.

That was the best I could do off the top of my head. How close did I come to Googling "best Britney Spears songs" in hopes of discovering a better joke? Closer than I'm willing to let you fragile minds ever know.

Is Tom Izzo the best NCAA Tournament coach in history? I was going to answer this title question with a snarky reference to John Wooden, but then I scrolled to the middle of the column and saw this: "MSU has as good a chance as any team left in the tournament to win it all."

You don't deserve my snarky reference.