The seventh-seeded Louisville women's team will face No. 2 Maryland tonight in the second round of the NCAA Tournament. Tip is scheduled for 7 p.m. and the game will be carried on ESPN2.

This is an intriguing matchup for a number of reasons, most notably because Jeff Walz was an assistant at Maryland before coming to Louisville, and because the Cards defeated the Terrapins in the 2009 Elite Eight.

"Obviously our seniors remember it," said Maryland coach Brenda Frese. "I've said this all season long: We have a lot of pride. So when you have something that's happened to you in the past, whether it be that Louisville game in their freshman year, or our ending last year, we're a prideful team. You would expect from players that are competitive and want to win."

There also seems to be some friction between Frese and Walz, who have not kept in contact since working together.

"I haven't talked to her in probably four years. We've both got our own thing going on," Walz said. "There's really no contact there at all." 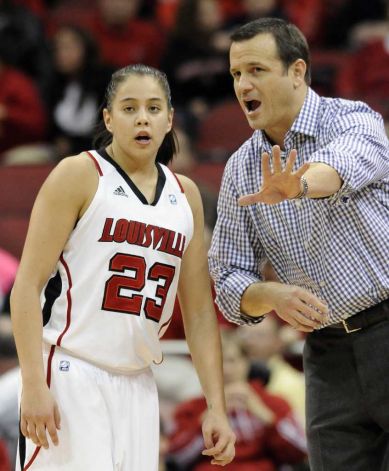 Champions of the ACC, Maryland (29-4) enters tonight riding an eight-game winning streak, including a 59-44 first-round win over Navy.