Multiple Cards Closing In On Records

Share All sharing options for: Multiple Cards Closing In On Records

A few things to watch for on Thursday, and hopefully beyond.

--Kyle Kuric now has 957 career points, leaving him just 43 short of the 1,000-point milestone. The odds would seem to be against him (or, maybe more accurately, Louisville), but it could happen...P.J., Angels in the Outfield.

--Peyton Siva now has the second-most assists of any Louisville player in a single season with 191. He trails only LaBradford Smith's record mark of 226.

--With his next block, Gorgui Dieng will move into a tie for fourth place with Scooter McCray and Cornelius Holden on Louisville's career blocked shots list with 173. That's insane to think about, considering Gorgui was a reserve who played 12-17 minutes for the bulk of his freshman season.

Yes, Russ Smith is on the verge of passing Darrell Griffith for a University of Louisville basketball record. 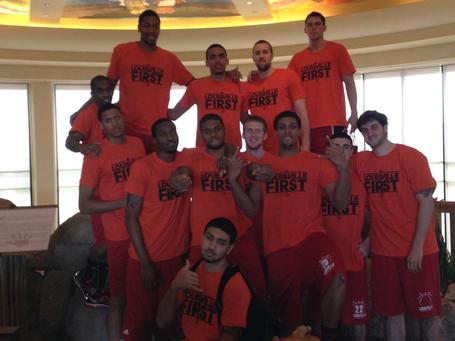 I'd ask where Russ is, but I think his postgame response on Saturday to the question of whether or not the team would be watching the Michigan State/Saint Louis game answers that.

Russ: "Yeah, we probably will. Actually, I'll probably be asleep like I usually am."