Share All sharing options for: Louisville vs. New Mexico News And Notes 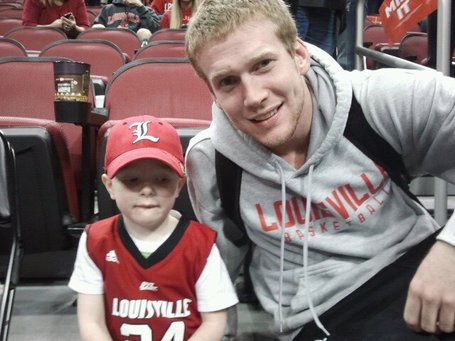 Hendo attempting to swing Behanan Baby Colton Gosselin over to the "Toddlers 4 Tim" side. Does not appear to be having much success.

The current world leader in the ESPN bracket challenge has Louisville winning it all.

A quick congrats to the women't team on advancing to the second round of the NCAA Tournament with a relatively easy win over Michigan State this afternoon.

Good story from Rick Bozich this morning on how important the character of Jared Swopshire has been to this team.

Some U of L fans are upset that Swopshire has not been encouraged to remain here and play another season. Swopshire is not perturbed. He said that Pitino will help him pick a new school after the season - and that he and Pitino have had several delightful conversations about their faith.

But seriously, I love you Swop.

New Mexico fans are familiar with the U of L program. The last time they were this close to a Sweet 16 was 1997 when the Lobos also faced Louisville. Kenny Thomas missed a put-back at the buzzer that would have won it.

Now it's again Louisville, albeit a generation later, that is the only thing standing between the Lobos and that incredible dream.

"(Louisville) is a serious name," says UNM senior Phillip McDonald. "Just to get to play a team from the Big East and a big-time power conference is good for us. We want to get there. Because Phoenix will be slash-Albuquerque (because of the fans)."

Rick Pitino and Louisville are both awfully good at this NCAA Tournament thing.

Fifth among active coaches in career victories in the NCAA Tournament, Louisville's Rick Pitino tries to get the Cardinals to the Sweet 16 for the 18th time as the program clashes with New Mexico in the third round of the West Regional at the Rose Garden in Portland, Oregon tonight.

Pitino, who is 39-15 during his career in the NCAA Tournament, moved to 13-3 in initial games thanks to a 69-62 triumph over Davidson in the second round on Thursday. Since 1975 only four programs have made it to the round of 16 more often than Louisville, the fourth seed in the region this year, those teams being UNC, Kentucky, Duke and Kansas.

New Mexico reminds the Cards of a Big East team, which could be good or bad.

"They're like a Big East matchup in the sense that Drew Gordon and their other big are great rebounders," U of L guard Peyton Siva said. "... They're kind of like a Notre Dame. They're tough rebounding and very gritty."

The fourth-seeded Cardinals (27-9) will be aiming for their 18th Sweet 16 appearance when they take on the fifth-seeded Lobos (29-6), who have never reached the tournament's second weekend.

Unlike Notre Dame, the Lobos don't try to slow the pace, but the way they defend could make points hard to come by.

New Mexico has limited opponents to 38.2 percent shooting from the field. U of L has been a shade better, ranking third nationally at 37.9 percent, the program's stingiest mark since the 1959-60 season (35 percent).

"It's going to be a game of defense and hopefully low turnovers," Gordon said. "I think it's going to be whoever has the least amount of turnovers and whoever can dig their heels in and play defense to the best of their ability."

Russ Smith on what a Sweet 16 would mean to him: "For real, I don't really think about it. I'm just out there playing."

Lobos star Drew Gordon on his relationship with Louisville assistant Wyking Jones: "Wyking was someone I trusted and still to this day we maintain a good relationship," Gordan said. "So it's nice to see him succeed. It's going to be bittersweet seeing him out there on the court."

Rick Pitino: not the biggest fan of officials or Portland.

Thus went another interesting news conference for Pitino here. First, he insulted the locals with a little sarcasm, which seemed more well intended than it looked on paper. Of the vacancy for the Portland Trail Blazers job, Pitino said: "I really want the job. I'd really like to get out here. The weather has just knocked me over. And I really would like to start losing again."

From there, he repeated what he said Thursday, that his center, Gorgui Dieng, did not deserve two of the first-half fouls that landed him in foul trouble and seemed to make him tentative later on. Pitino said Dieng had "a lot of bad luck with the whistle this year." He said officials struggle with decisions on good shot blockers, since they're rare. He said the Cardinals' first game, a win over Davidson in the West Region, was not officiated like a Big East Conference game. 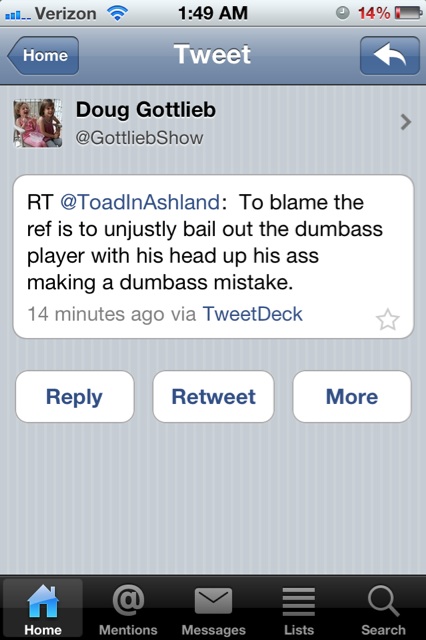 That retweet has been deleted, of course.

ESPN's Ted Miller says the key in tonight's game is a relatively simple one.

The key in this one, however, is shooting. I know: Genius. But this game pits two of the nation's top-five field goal percentage defenses, with both hovering around 38 percent. Both defenses won the battle in their second-round victories. The Cardinals shut down a high-scoring Davidson attack, miring a team that likes to run in a half-court game, while Williams played a major role in shutting down Long Beach State point guard Casper Ware, the Big West Player of the Year, who shot 5 of 19 from the field and was 2-of-9 from 3-point range.

Williams seems most likely to take on surging Louisville point guard Peyton Siva. While Siva isn't the Cardinals' leading scorer, he won Most Outstanding Player as he and his teammates took a surprising roll through the Big East tournament. He scored 17 points -- one below his season's high -- in the win over Davidson, and has averaged 14.4 points, 5.4 rebounds, 5.8 assists and 2.6 steals in five postseason games.