With Pressure Of First Win Gone, Cards Can Focus On New Mexico

Share All sharing options for: With Pressure Of First Win Gone, Cards Can Focus On New Mexico

I think we can all be honest about now: yesterday was terrifying.

Sure, Davidson was a dangerous first round opponent, but the Cards could have drawn New Albany High School and we'd all have been on edge yesterday. The "haven't won a tournament game in two years" talk weighed heavily. We heard it so much that we knew the team had to have heard it a pretty solid amount as well. As a result, I think everyone was about ten times more nervous than they would have ordinarily been from the moment U of L's name popped up on Selection Sunday right up until the final horn signifying a Cardinal victory Thursday afternoon.

Louisville terrorized the ordinarily sharp-shooting Davidson Wildcats into 21% shooting from beyond the arc and held them 16 points below their average of 78. Peyton Siva continued his tremendous postseason play by getting to the rim at will and finishing with 17 points and six assists. Chane Behanan celebrated his big dance debut in style (501 denims, money stuffed in 'em) by posting a double-double with 14 points and 11 boards.

People are making a big deal out of Louisville going just 1-for-5 from three, but you take what's given to you, and Davidson was giving the Cards (Siva, in particular) the lane, and so they had no choice but to take it.

That wasn't a negative, but the fouling of Gorgui Dieng (first one was complete shit) and Siva was. Again, those two guys are our biggest assets when playing against the nation's best team, and we can't afford to have either on the bench for more than five or six minutes from this point on.

So now we've got that 1997 feeling as the Cards prepare for New Mexico in the Round of 32. Kenny Thomas is gone, but the Lobos have an equally lethal post presence in Mountain West Player of the Year Drew Gordon. It goes without saying that Gorgui, Chane and Swop are going to have to step up for Louisville to get back to the Sweet 16.

The Cards go from a 10:40 a.m. local time tip on Thursday to the very last game of the day on Saturday night. Even though that means an insane build-up of nerves, I'm a fan.

It's the second day of the NCAA Tournament and the dream is still alive. 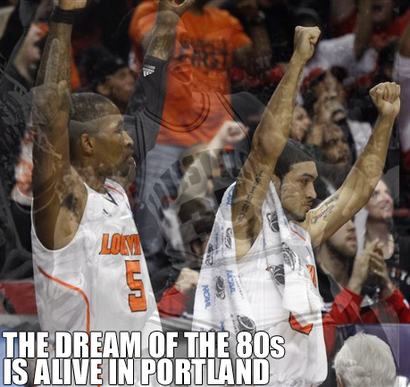