So my weekend was slightly unreal.

I’ll jump right into part two of my Big East Tournament running diary, but just know, I am still struggling to remember what pants are and how they work.

7:20- We were a bit late to the Syracuse v. Cincinnati game as we decided to go to dinner at Morimoto, one of the restaurants owned by Iron Chef Morimoto. This was one of the best meals I’ve ever had and the culinary experience was worth every penny. Unfortunately, Morimoto wasn’t in that night, so he eluded me on my mission to one-upping myself and Chron everyone in sight. 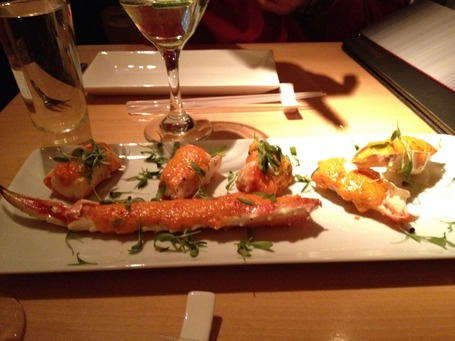 We got to our seats midway through the first half and there were about 17,000 angry and confused Syracuse fans, which was much to my delight. I couldn’t believe what I was witnessing, but I, like many of you all I’m sure, were more than happy to not play Syracuse a third time.

I think everyone in the arena and watching at home fully expected Syracuse to make a big run and wind up winning the game, so the outcome was quite pleasing.

Dion Waiters again proved just how important he is to their team. He is so good and appeared to be the only one not fazed by being down for most of the game. He put the team on his back and was probably the only reason this game wound up only being a two-point game.

A funny side note: during one of the media time outs, they honored a couple of quality student athletes from Cincinnati who play other sports and while everyone is giving them a polite and well deserved round of applause, drunk Syracuse fan on the other side of my dad gets up and starts to aggressively boo. My dad leaned over and said, "excuse me, this is none of my business, but are you f’ing kidding me, man?" I’m telling you all, no Big East fan bases spew class like Syracuse and UConn. Having encountered them for five years in New York around this time of year, it makes their teams very hard to root for.

Anyway, following the game, you could hear all of the scalpers outside of the garden crying and the 1,500 or so Louisville fans were elated to not have to potentially play a defacto home game for Syracuse. Notre Dame fans certainly felt the same way, but they were in no way ready for the infrared storm that was headed their way.

9:35- By the time our game even started, the Garden was an absolute ghost town. Most of the Syracuse fans left, which allowed us to move from our end zone seats to about 10 rows up right at center court. As soon as we sat down I saw Tom Jurich sitting in the section to our left in the same row so it’s good to know I had better seats than him for at least one game.

This game may not have been as aesthetically pleasing offensively as the Marquette game, but it was fairly clear Notre Dame never really had a chance. We came out on a mission and they just didn’t have any answers to our aggressive defense and they let us get out and run, which we hadn’t been able to do against the burn offense as much in the past.

Notre Dame was leading 15-9 about half way through the first half and Jack Cooley was having his way inside when Rick called a time out. I would absolutely love to know what he said to them, because we were a different team after that talking to, not letting up a field goal until a few minutes into the second half.

I also can’t say enough about Gorgui and Peyton’s performances in this game. For Gorgui, it’s hard to ask for much more than 8-8 shooting and six boards. It would have been nice to see him get to the line a bit, but he played a hell of a game. As for Peyton, I mean talk about stuffing the stat sheet. He was Mr. Do-it-all throughout the whole tournament, but 13 points, nine assists and eight rebounds is a pretty freakish line. I simply couldn’t and still haven’t wrap my head around just how much he has improved in such a short amount of time.

11:45- We headed back to Stout for a little post game celebration. While Griff and Denny weren’t there, this was pretty awesome. A couple hundred Louisville fans took over the back room and everyone was beyond excited. Everyone was mingling and having fun and simply enjoying the moment.

At around 12:45, they had the Ladybirds dancing as they cut down the Syracuse and Notre Dame signs that hung above the bar while playing Another One Bites The Dust. This was pretty special.

10:15- It was a fairly long night on Friday, but I woke up wide-awake and winning a championship was all I could think about.

5:45- We headed to an early pre-game dinner at Union Square Café, which is a Danny Meyer restaurant. He and his son both happened to go to the same summer camp I attended growing up so it was fun to check out one of this man’s great restaurants.

After a delicious meal, the manager, who had talked basketball with us for a bit, brought out an otherworldly delicious tray of cookies and brownies with a pretty awesome message. Welcome to the family, Union Square Café. 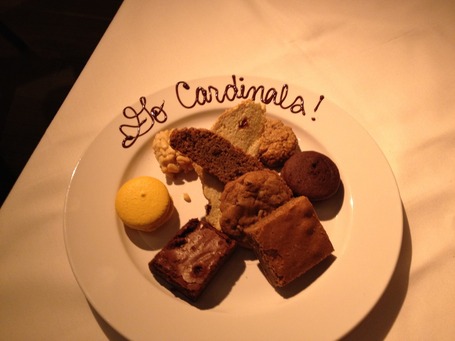 7:40- We arrive at Stout for one last pre-game gathering. I felt the need to redeem myself for the out of focus picture with Griff from Wednesday, so in doing so, I got Denny in on the action. Seriously though, we should be proud of these two men. They have so much love for the community and despite their popularity, they are both so humble and nice and really seem to love every second of being around the fans, which I would imagine, probably doesn’t happen at too many other places. 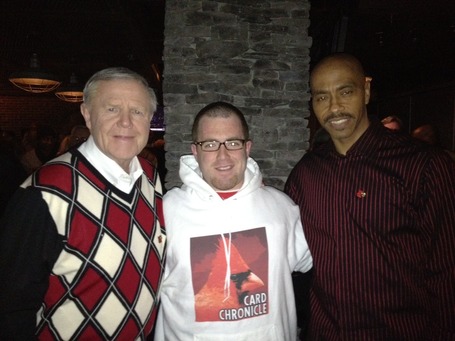 Eric wood was also at the bar, but by the time I spotted him he was on his way out and I wasn’t able to get a picture with him. Just know that he is utterly enormous.

6:25- We made the final walk over to the Garden and on our way in, we spotted Peyton Siva’s dad and I was able to get a picture with him. He, also, couldn’t have been more kind and humbled. After taking a picture with him we chatted for a few minutes and he couldn’t have been more appreciative of us complimenting his baby boy. We shook his hand and headed off to our seats. 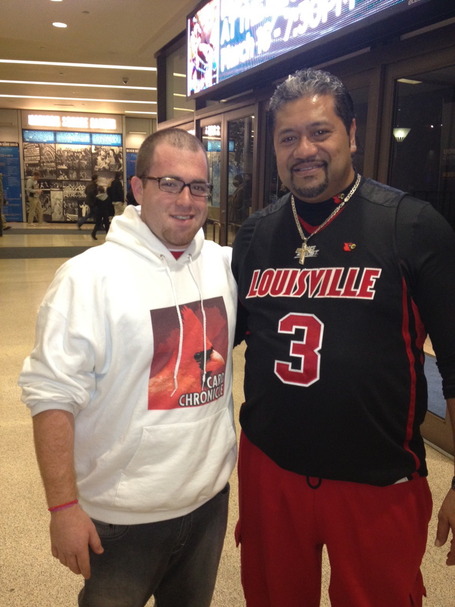 Now, as I mentioned earlier, ticket prices absolutely plummeted after Syracuse lost, so I had the idea late Saturday afternoon to look on stub hub and write down all of the good seats that were for sale, so we could just go sit in them. I truly thought this was fool proof.

Since we had headed over with a friend of mine who I have known since Kindergarten, my dad sent him, his Girlfriend, brother and friend from high school into a set of four seats we had found while we would take a set of two about two rows behind them right at mid court about 15 and 17 rows up respectively.

While everything filled up around us, we were golden until the under eight time out when two folks who looked like they couldn’t have cared any less about this game showed up with tickets in hand, so instead of trying to look for more seats, we just ran back to our regular seats since we didn’t want to miss anything.

The group of four were fine the entire game, so at least they were able to enjoy my plan.

Gorgui again played another outstanding game. While he didn’t score much, he got a number of key rebounds and kept Yancy Gates relatively in check.

This game literally couldn’t end fast enough, but finally the clock struck 0.00 and after a bunch of missed free throws by the Bearcats who shot just 14% from the line for the game, it happened. 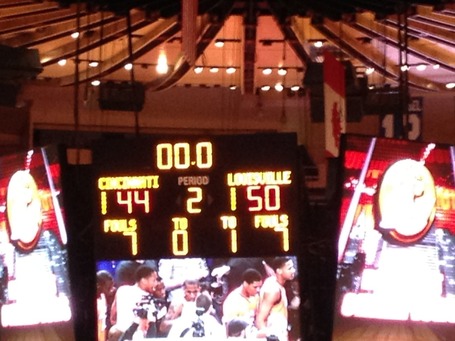 There are very few things in life that are better than having the opportunity to watch your team win a championship, especially this one. Even in a down year, this is still the most difficult conference tournament to win. We just beat three tournament teams and another who barely missed in four consecutive days and I am still smiling.

After jumping up and down for a few minutes, we cut through rows and sections and wound up in the first accessible row behind the bench (there are a few rows of seats in between but no one can get there unless you have a ticket. It’s the one area of the arena with actual stiff security).

We spent a good 20 or 30 minutes just soaking it all in, listening to the PA announcer call out our team, and watching our boys cut the nets down.

Once the Net cutting was over, everyone lingered for a bit and we slowly made our way to the exit. On our way out, we stopped and got a picture with Rock. Thanks to Rock for making us not look so short. 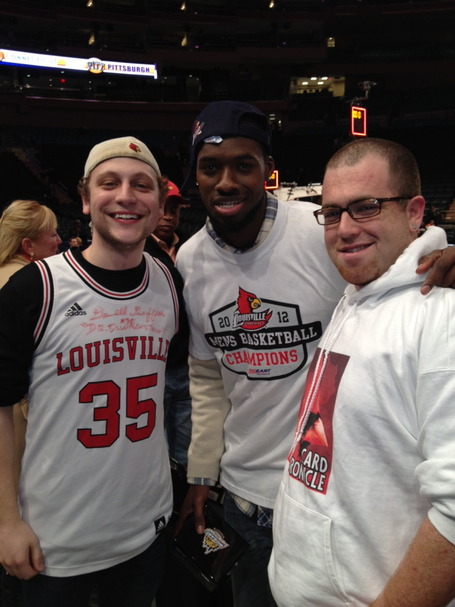 After gathering ourselves, we were ready to leave when a group of ladies was walking out of the important people section and one of them fist pounded me when I wasn’t paying attention, but it was Joanne Pitino. She was juiced.

We FINALLY walked out through the club level, where we again saw Mr. Siva and I had to high-5 him. While we stopped in the bathroom, Preston and Jerry were wandering around the hall so it was cool to see them. For those unaware, Jerry has dropped about 20 pounds since he graduated and is in rather incredible shape. I’m not sure how he could possibly have had 20 pounds to loose while playing in Louisville, but good for him. If he keeps playing at the level he is currently, it’s highly likely he will make an NBA roster at some point soon.

Once we got outside, I had to buy a shirt, so I snaked my way through the crowd and wound up shouting at the poor vendor, but I successfully got the last large they had, so it was worth it.

We headed back to Stout one last time with the majority of the Louisville fan’s and celebrated the victory and just tried to drink it all in. The week had flown by, but was truly incredible.

I was there for the 2009 Championship, but this one felt sweeter. I think we all expected that team to do what they did, because let’s face it, they were way more talented. To watch this run unfold before our eyes was so special. You would be lying if you could tell me that you thought this was realistic heading into Wednesday. The way we had been playing, it just seemed like a little to steep of a mountain to climb.

Enjoy this, and I hope I have done what I set out to do when I decided to write the updates, and that is to get more Louisville fans to NYC next March. This event is so special, and winning it is insanely difficult, but so, so sweet.

Cherish this and get ready for some dancing. We still have work to do.