Share All sharing options for: Rick Pitino: Davidson Is "Toughest First Round Opponent" I've Ever Faced 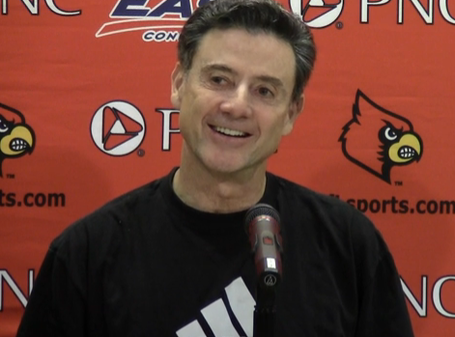 I know the statement in the headline is going to draw a lot of response, because it does every year. If you don't believe me, check out some of the results from this Google search.

I actually think it's hilarious and I hope he does it every single time we're in the tournament.

Now onto the recap of today's presser.

--The team is very excited about being in the tournament. They've gotten all the celebrating out of their system and got back to serious work today.

--Davidson is outstanding. They play at a very fast pace but they're still sound fundamentally. He calls it the Princeton offense on steroids.

--Davidson has two conference players of the year on their roster. One was voted by the media and the other by the coaches. It's not just those two guys though, they're very good top to bottom.

--"This is the toughest first round game I've had as a basketball coach." Davidson is very, very good. Everyone on their team can shoot it from the outside, and that makes them very difficult to prepare for.

--Is fine with the seed. He's just happy to be in the tournament. Was a little bit surprised that we got sent out West. Thought we'd end up in Columbus or Nashville. Everyone is telling him that if they'd lost in the Big East championship they would have ended up in Columbus.

--We had a great contingency of fans in New York for the tournament. Every year the number grows by about 200-300 people. It's definitely not a cheap trip, so it felt great to win it for those fans who sacrificed and made the trip.

--We made up our mind that once the tournament came we were going to play the style that was more conducive to our players. We had to wait until the end of the season because we knew we couldn't do it against USF or Syracuse. We were planning this three weeks ago. Even against Cincinnati, which was a low scoring game, we were still able to pick up the pace.

--I've been a part of a lot of conference championships, and I don't think I've ever seen a team as excited about a championship as this one was. It was great to witness and be a part of.

--Peyton learned a lot by watching Jordan Theodore on tape. He picked up a lot about changing pace by watching him. A lot of Peyton Siva's problems this season have come from trying to play too fast. He was far more under control during the Big East Tournament.

--Told Siva towards the end of the season that he knew he was hearing a lot about the way he was playing from every angle. He's part of a world where when he's playing badly he's going to get text messages from everyone in his life. I don't subscribe to that culture, but he has no choice. Told Peyton that the good part about the world is that he can go to New York, give some great performances, and now everyone is saying he's having the best season of his life. That's just the way it is.

--Peyton's rebounding was a big part of the team's success. They kept announcing his height as 5-11 at the tournament. Not sure when he shrunk an inch, because he's 6-0 on our roster.

--"The infra-red is here to stay. The players would kill me if I tried to change."

--Knows some fans like the jerseys, and some fans don't. The game is for the players and they love the jerseys. We're undefeated in the jerseys so it would be silly to change right now.

--(Your second game as Louisville head coach was in Portland. Is there anything you remember about that?) "We got our asses kicked. Until you just mentioned it, I'd forgotten about being out there."

--Still very bullish about this team, but we have a very tough first opponent. Three seeds and up are going to play somebody very, very good in their first tournament game. They're a very good basketball team, and an extremely well-coached basketball team.

--We never got down this year, and we're not going to get too high after this championship either. We did our celebrating that night, and now we came back today ready to go back to work.

--Gorgui played really well in the Big East Tournament. Kyle also did a lot of great things outside of scoring that he hadn't been doing before.

--The seniors have to lead in the tournament, but Chane Behanan, Wayne Blackshear and Kevin Ware know they're going to have to play as well.

--Not concerned about playing on the West coast or the early start time. That stuff doesn't really matter in the tournament. Davidson is in the same boat as we are.

--If it wasn't for UT-Martin, Fairleigh Dickinson and somebody else, we would have had the No. 1 schedule in the nation. We had to play that exempt tournament with three teams with RPIs above 300, and that dropped us from 1 to 9.

--Two years ago Cal was just better than us. Last year I think we would have won if Preston Knowles hadn't gotten hurt, but give credit to Morehead State for making a shot at the buzzer. I think this is a tougher opponent than both of those teams. Is our team better than those Louisville teams the past two years? I don't know. But they've fought through a lot of adversity, always kept a good attitude, and they got rewarded for that in New York.

--Losing in the first round the last two years ago won't affect this team that much. We're already extremely motivated and ready to play.

--Davidson isn't a good passing team, they're a great passing team. They're not similar to anyone we've played this year. They have about six guys who are like Luke Hancock and they're very difficult to defend.

--Davidson isn't going to beat themselves and they shoot the ball incredibly well. It's going to be a very tight game.

--Once the ball gets tossed up, it's all about matchups and none of the motivational tactics matter.

--Hurt his wrist trying to dunk (Russ Smith bet him he couldn't do it). Didn't finish the dunk, but he did grab the rim.

--Having four Kentucky teams in the tournament is great. Murray State is great. Western Kentucky was a shock, but it was great to see them get hot and sneak into the tournament with a new coach. And then you've got Bellarmine going for back-to-back national titles. For a small state, college basketball is alive and flourishing very well here.

--I always look at whether or not a team is reaching its potential heading into the NCAA Tournament, and right now the answer for us is yes. There are still weaknesses on this team, and only time and experience can improve that.

--Russ didn't shoot or score well in the tournament, but he played much better than he did during the regular season because he took good shots and played great defense. He was a much better basketball player in New York than he was in the regular season. He affected the game in a positive way for us.

--Peyton was really exhausted in the championship game. We really had to milk the clock at the end of the game because he had nothing left.

--Russ grew a lot defensively in New York. In the Marquette game he came into the huddle during a timeout and told everyone to stay on their man and that he would help on their big guy, and that was a great sign because before you wouldn't have thought in a million years that Russ would have a defensive suggestion like that.

--Watched the Selection Show until he saw that we were headed to Portland and then he went home and went to bed. Woke up at 12:30 and watched film of Davidson on the computer until about 4:30. Texted Richard at 5:15 and he got very mad.

--There was a point in the season where we weren't even sure we were going to be in the tournament. So to be a part of it and have a good seed after winning the Big East is something we're very excited about.

--Will not wear an infa-red tie.