Cross-posted from the dot com, so excuse the objectivity

For the first time since the inception of the conference, the Big East Tournament championship game will take place without at least one of the league's founding members being involved. That doesn't mean the two participants aren't familiar with one another.

No team has played Louisville more times than Cincinnati, a series that dates all the way back to 1911. The Cardinals and Bearcats have traveled through several conferences together and squared off 95 times, with U of L currently holding a 53-42 advantage.

The most recent meeting occurred Feb. 23, and resulted in a gritty 60-56 Cincinnati victory at a time when UC desperately needed a resume victory to play its way onto the right side of the bubble. Cashmere Wright was the star of stars from the Bearcats, burying six three-pointers (a handful of which came from well beyond the arc) and finishing with a game-high 22 points. On the flip side, UC frustrated Louisville's Kyle Kuric into the worst shooting performance of his college career, an 0-for-11 night which included an 0-for-7 clip from three. Kuric, Louisville's leading scorer at 13.1 ppg, made the trip back down I-71 with just two points.

Each team faced the most difficult road imaginable to get to this point, with Louisville sneaking past Seton Hall in the first round before eliminating No. 2 seed Marquette and No. 3 seed Notre Dame on consecutive nights. Cincinnati, meanwhile, outlasted fifth-seeded Georgetown in double overtime before handing regular season champion Syracuse just its second loss of the season to reach Saturday's final.

Louisville came to New York in danger of failing to hit the 60-point mark in five consecutive games for the first time since 1944. They narrowly avoided that dubious distinction with a 61-55 win over Seton Hall on Wednesday. Then, seemingly out of nowhere, the Cardinals erupted for 50 first-half points en route to an 84-71 quarterfinal victory over Marquette. They followed that up with a solid offensive performance in a 64-50 win over defensive-minded Notre Dame.

The bulk of the praise for U of L's sudden offensive resurgence (if you can call it that) should be directed at point guard Peyton Siva, who has been tremendous over the past three days. The junior floor general heads into championship Saturday with postseason averages of 15.5 points, 8.0 rebounds, 7.5 assists and 2.5 steals. Hes's been the best player on the floor in each of Louisville's victories.

For Cincinnati, the sexy story has been Yancy Gates, who is playing his best basketball of a season that included a five-game suspension for his infamous role in a Dec. 10 brawl with rival Xavier. Gates has been sensational in the Garden, scoring 23 points with eight rebounds in the emotional win over Georgetown, and then following that up by going for 18 and seven against Syracuse. He'll battle in the post tonight with Gorgui Dieng, who broke the single-season record for blocks in a season at Louisville on Wednesday, and went 8-for-8 from the field on his to a 16-point night against Notre Dame. 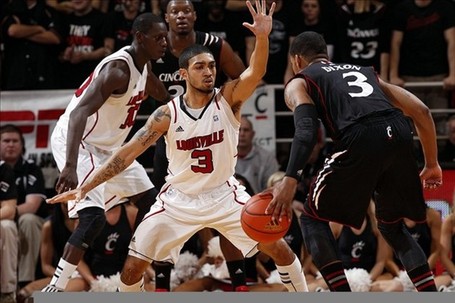 One of oddest occurrences of a fairly odd tournament was Cincinnati bouncing back from a 2-for-21 three-point shooting performance against Georgetown with a 10-for-22 mark from deep against the Orange. Much of the reason for that was Sean Kilpatrick, who broke out of a shooting slump in a big way by burying 6-of-9 treys and tying Gates for the team-high in points with 18.

Louisville is one of the best defensive teams in the country, which makes the great range of Cincinnati's guards even more of an asset than ordinarily. Kilpatrick, Cash Wright and Dion Dixon are all just as capable knocking down shots from a couple of steps behind the line as they are right at it. That's huge against a team like the Cardinals, who are as good as anyone at defending the perimeter. Wright, in particular, has had a great deal of success against U of L throughout his college career.

The one factor that would seem to be heavily on Louisville's side is experience, as the Cardinals - the 2009 Big East Tournament champions - are making their third title game appearance in the last four years. Cincinnati, conversely, had not advanced beyond the quarterfinals before this current run.

Saturday night will mark the second time the Cards and Bearcats have done battle in a conference tournament final. Louisville defeated Cincy 42-31 in 1981 to claim the Metro Conference title.

As previously mentioned, Gates being named Big East Tournament MVP after the start he had to his senior season would be a tremendous story, and one I'm sure more than a few members of the media are hoping for. If it happens it will be deserved, as Gates has been a monster in the paint up until this point.

Is averaging 15 points in the tournament and has knocked down 7-of-15 three-point attempts.

Is averaging a fairly pedestrian 10.5 ppg, but does have 12 assists, eight rebounds and six steals in two games.

Big things were expected from the former McDonald's All-American in his junior season, and up until this week he had failed to deliver. Siva has looked like a completely different player under the bright lights of Madison Square Garden, averaging 15.5 points, 8.0 rebounds, 7.5 assists and 2.5 steals through three games. He's been the best player on the floor every night.

The Cardinal big man is averaging just under 11 points and nine rebounds, but where he's really made his mark has been the defensive end, where he's totaled 10 blocks and four steals.

Hasn't had a tremendous shooting week, but is still averaging a solid 15.0 ppg heading into the title game.

The teams are nearly identical in terms of make-up, points per game and scoring margin, so there's no reason to believe this one won't be tight for 40 minutes. Louisville does have the disadvantage of having played an extra game, but they also have the experience of having played in this game a year ago, and the motivation of having lost it.