There's no longer any question about it: something special is happening.

Louisville put together its second complete effort in as many nights to roll past Notre Dame and into the finals of the Big East Tournament, where the Cards will face longtime rival Cincinnati.

I don't know about you all, but there have been at least 50 times in the past 48 hours where the only thing in my brain has been: "what is happening?" This is not the team that appeared incapable of scoring 60 points in game in an empty gym last week, hell it's not even the team that was 12-0 in late January.

The team that has taken the floor inside Madison Square Garden the past two nights is the team we've been dreaming about since the final horn sounded against Morehead State almost a year ago. That team is now one win away from doing something incredibly special.

Gorgui Dieng isn't missing shots, Peyton Siva is nearly achieving a triple double, Jared Swopshire is stepping up as the calming presence this team has needed for the past two months, Kyle Kuric is doing the little things Rick Pitino has been begging him to do for months, INFRA RUSS WON'T STOP LEVITATING.

There's no point in questioning why or how this is happening. The only thing we can (and should) do is smile and bask in the fact that in about 20 hours, the team we've spent far more time watching, following and discussing than any reasonable group of human beings ever should will play for the Big East Tournament championship in the final season of the league's existence as we've known it.

These days and moments don't come along all that often. This is a time to celebrate and appreciate. 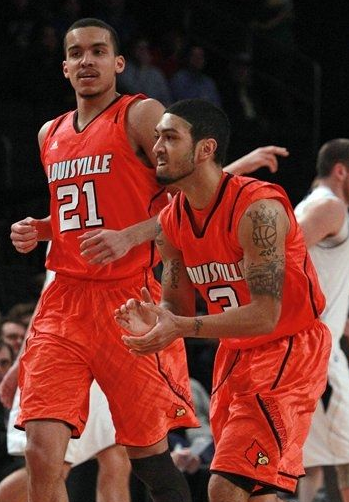