Share All sharing options for: The Five Most Important Takeaways From College Basketball's Second Opening Night

Cross-posted from SB Nation...because we all like talking general college basketball too...don't we?...DON'T WE? I need your admiration for infinity. Not that this ain't lucrative, but I just need your energy.

On the evening where sports fans previously too immersed with football to properly focus on anything else officially shifted their attention to the hardwood, the opening night of college basketball's unofficial second season went beyond delivering. The sport's headline rivalry game was won at the buzzer, the two best teams in the Big East played an overtime contest that was decided by a single possession, and the Big 12's premier program made a monster statement on the road against a fellow top ten opponent.

Here are the five biggest things to take away from the biggest night of the 2011-12 college basketball to date.

1. The Season Has Its Defining Moment

Hate the Blue Devils, hate Duke-UNC and hate Austin Rivers all you want, but final shot of Wednesday night's game is the showcase moment of the season thus far. I mean this is the former No. 1 recruit in the country playing against North Carolina for the first time, and he almost single-handedly keeps his team in the game for 38 minutes before capping a furious rally by burying a trey at the buzzer to break the hearts of the team everyone had winning the national championship before the season. And then he walks over to the Tar Heel student section and says, "see y'all." 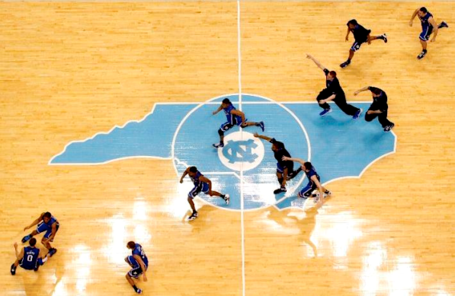 There's nothing else to say about the game's final two minutes that hasn't already been said, so let's move on to the fact that neither team looked like an eventual national champion on Wednesday.

Duke couldn't keep Verne Lundquist out of the lane, and their post players couldn't stop Kevin Connoly from bodying them up and getting easy baskets in the paint. Kendall Marshall and Tyler Zeller are both solid offensive players, but they aren't anywhere near as good as the Blue Devils made them appear Wednesday night.

The sad thing for Duke fans is that this group has about as much offensive talent in the backcourt as any Coach K team of the past five or six years, and that fact is essentially the lone reason they woke up feeling good about themselves this morning. But at some point over the next five weeks, Duke has to figure out what to do against a team that can take away the clean looks from outside for Rivers, Curry, Dawkins etc. and exploit their weak post defense on the other end of the floor. It's exactly what Florida State and Miami did, and exactly what teams with similar capabilities will do going forward.

Wednesday night was a huge win for both Duke's confidence and its ACC championship hopes, but I'm not one step closer to buying the Blue Devils as a legitimate national title contender.

As for North Carolina, the Tar Heels still just don't get it. Talent is useless when it isn't coupled with killer instinct, and that's precisely the dilemma Roy Williams is facing right now. There is no reason for that UNC team to squander a 10-point lead in two minutes against anybody, let alone playing against their arch-rivals on their home floor. Then again there was no reason for that UNC team to let UNLV drop 90 points on them or to lose by 33 at Florida State.

The bright side for Carolina fans is that if UNC wins going away Wednesday night then nothing changes, whereas if that final sequence doesn't wake the Tar Heels up then nothing will.

2. Baylor Is Who Most People Thought They Were

Baylor has at least two future NBA players in its starting lineup, its only lost three games heading into mid-February, and it is absolutely no threat to cut down the nets in New Orleans. Wednesday night's loss to Kansas was Exhibit C.

A home defeat to the 7th-ranked Jayhawks alone wouldn't be enough to draw significant criticism, but a 68-54 loss where the Bears appeared as interested in competing as Stephen Hawking is in the Kardashians (note: calls to Mr. Hawking to confirm said disinterest were not returned) certainly is. The problem with Baylor is the same as it was in their first loss to Kansas and their loss to Missouri: when the proverbial moment is upon them, they want no part of it.

BU's season from this point on is almost a foregone conclusion. They'll put up a valiant effort at Missouri because the Tigers will allow them to score enough to not let their focus wander; they'll beat most of the teams they should beat in the Big 12 but will drop another game or two to a Kansas State or an Iowa State; they'll earn a bye in the league tournament but will beaten by Kansas (again); they'll win at least a pair of games in the NCAA Tournament because of their talent, but will fall when a team with slightly less talent but infinitely more resolve puts them in a pressure situation.

There it is. Feel free to watch other games and simply check the Bear box scores in the future for validation.

3. Syracuse Finally Has A Go-To Guy

The "hot" question concerning Syracuse in recent weeks has been who Jim Boeheim should turn to in situations where a game is on the line. With seven different players averaging between 7.3 and 14.3 points per game, the Orange are as well-rounded as any team in the country, but with that balance comes the burden of not having an unquestioned star.

Against rival Georgetown Wednesday night, Syracuse had two possessions where it needed someone to make a play in order to win the game. The first came at the end of regulation, where Scoop Jardine had his penetration cut off and then threw a wild pass to Dion Waiters who clanked an awkward looking three. The second came at the end of ovetime, where Kris Joseph, who made play after play when SU needed him, buried a deep dagger to put the second-ranked team in the country up for good. Joseph hit 6-of-11 threes and finished with a game-high 29 points.

"The Quebecois Kid" should get every pivotal late-game touch (gross) for Syracuse going forward.

4. Pittsburgh Is Not Going To Make The NCAA Tournament

All it took was the Panthers to get Tray Woodall back and go on a four-game winning streak for every national writer who put them in the top ten before the season to say: "See? This is what I was talking about in October. These guys could definitely steal an at-large bid."

There's no question that Pitt is better now than it was when it lost its first seven Big East games without Woodall, but Wednesdays's 63-51 loss to South Florida should put to bed any notions of a miracle run into the field of 68. The Panthers' fairly impressive two-week run doesn't change the fact that they had some massive deficiencies before Woodall went down, that they were beaten by ten at home by Long Beach State or that they have absolutely no non-conference victories of any importance to speak of.

Jamie Dixon isn't going to let this team fold, and they're going to be a nightmare matchup for one of the Big East's top seeds in Madison Square Garden, but the path to the NCAA Tournament is far too precarious to be successfully traversed at this point.

5. Florida State Is Not Going To Win The ACC

The Seminoles are 7-2 in the ACC and have already knocked off their top competition for the league crown - North Carolina and Duke - in impressive fashion. They handed UNC a horrifically embarrassing 33-point beatdown at the Tucker Center, and then a week later ended Duke's nation-leading 45-game home winning streak with a dramatic win at the buzzer.

Those are a pair of tremendous accomplishments for a team that didn't look like it could score enough to beat anyone of consequence early in the season, but who a team was is always at least a slight indication of who they still are. That fact was undeniably apparent in FSU's awful 64-60 loss to 8-16 Boston College Wednesday night.

"Starting off the game, what we did, not respecting that team - we weren't as focused as we should have been and that caught up with us at the end of the game. We got national recognition, and we didn't handle it well."

It's the type of inexplicable slip-up you simply can't have when you're competing for a conference title with two top ten teams. Florida State will have a first round bye in the ACC Tournament, but there won't be a little "1" next to their name when the bracket becomes official.