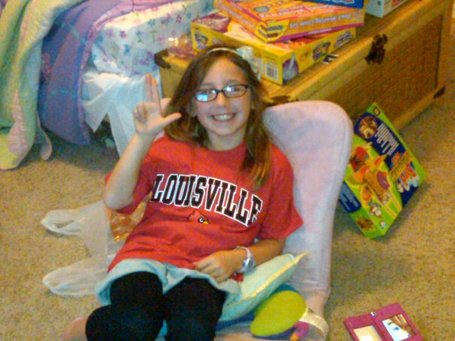 Arizona native Gianna Pruden says being a U of L fan motivates her to get out of bed every morning.

It's funny that she brings up beds because it looks like we have the same comforter. And it is hard to get out of.

No idea who is or isn't in the Big East anymore.

Congrats to the women's team on their valiant effort against No. 3 Connecticut last night. By all accounts the crowd was tremendous.

The other big story out of the night was Husky coach Geno Auriemma saying after the game that he hopes Louisville will give him a call to be their new head coach once Jeff Walz bolts for Tennessee. I don't think I'm alone in having zero idea what he's talking about.

Mitch McConnell and Joe Manchin are still going at it over Louisville, West Virginia and the Big 12.

Each man has close ties to their university sports teams. In 1965, Manchin was awarded a scholarship to play quarterback at the university. And when he was governor in 2006, he helped launch the Coal Bowl, an annual game between West Virginia and Marshall University.

McConnell - an alum from Louisville from the class of 1964 who has a scholarship program named after him - attends virtually every home football game, decked out in his Cardinal red. He makes the rounds with fans as they tailgate before the game.

"It's right up there with campaign finance reform, which is on an intensity scale 12 out of 10," Sen. Lamar Alexander (R-Tenn.) said when asked about McConnell's passion for Louisville football.

Gerod Holliman, Keith Brown and James Burgess are on campus and happy to be here. 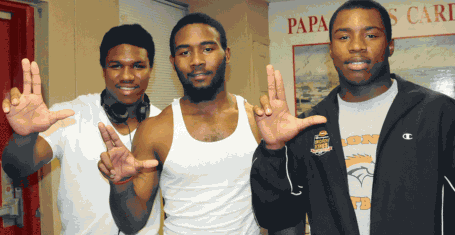 Lost Lettermen has LaBradford Smith at No. 7 and Darrell Griffith at No. 1 on its list of the top ten dunking guards in college basketball history.

Speaking of Griffith, the 1980 Louisville Cardinals are credited by some with being the inventors of the high-five, and the other day I was thinking about the evolution of the high-five and its significance to people my age.

Just behind walking, learning how to high-five is basically the second major motor skill people my age learned. We were taught by our parents, who then made us show off their parenting skills by performing the feat at any social gathering, which led to us having to re-perform it for every adult male in the area trying to say "hey, look how good I am with kids, babe" to his significant other without actually uttering the words. When we got a little bit older we started high-fiving with our friends, and it was cool. Then it became uncool and we all started doing our own personal "ghetto shake" rendition. High-fiiving then got cool again a little while after puberty, but only because we did it ironically. Now we're adult males, we still high-five, and none of us have any idea if we're still being ironic or not. 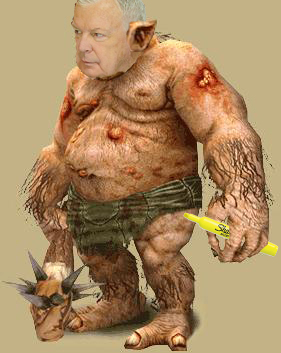 We talked a little bit about it on the radio show last night, but I fully support Gisele Bundchen's vehement defending of Tom Brady when she got heckled by fans after the Super Bowl. Isn't that a spouse is supposed to do?

To take it a step further, I thought it was extremely refreshing to see a celebrity in a marriage actually acting like they genuinely care about the person they're married to. I don't know what to say, I've been looking for some sign that true love exists ever since Seal and Heidi Klum called it quits.

Yes, this is what you're missing when you don't listen to our radio show.

Speaking of our radio show, we were joined last night by CBS' Brett McMurphy, who has been the go-to-guy in the national media during this entire expansion drama. He touched on a lot of different issues, but the main note for U of L fans is that he said he does expect the Big 12 to expand, and that when that happens there's no question that they're going to invite Louisville. As for when this all might go down...no idea.

Have gotten a lot of feedback on my Duke/UNC column for SB Nation today. I'm not sure any of the U of L/UK fans who have messaged me actually read it, or at the very least, noted the word "defining" in the headline.

This would be the moment where I point out that I wrote this for the dot com a little over a month ago.

Loved hearing that there was a national shoutout to Scotty Davenport and the Bellarmine University Fighting Mike Rutherfords during the game Monday night. 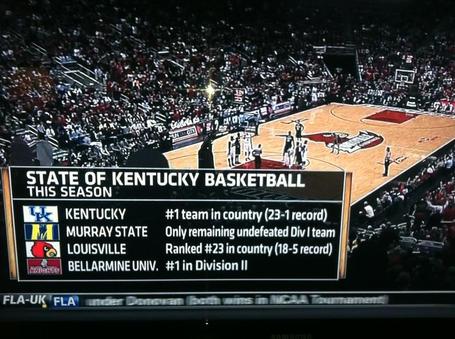 Going to go ahead and assume it was all Bilas' doing since he continues to grow closer and closer to becoming my personal Jesus (Depeche Mode) every day.

Second best part of the broadcast might have been this guy: 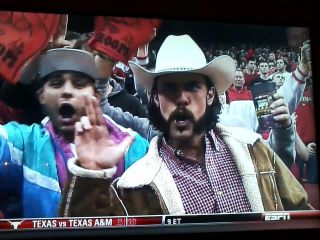 Tennessee congressman Steve Cohen is pumped that Memphis is headed to the Big East, and made it a note to give Rick Pitino a quick shoutout in his statement on the matter today.

"Thanks to Louisville coach Rick Pitino for his strong support. And congratulations to Dr. Shirley Raines and R.C. Johnson."

Derrick Caracter was waived by the Los Angeles Lakers on Tuesday. Best of luck to him going forward.

That news reminded me of what has to be the tweet of Gary Parrish's life:

On a somewhat related note, did you see Earl Clark and Tyler Hansbrough get into it a little bit the other night? Maybe a little leftover bad blood from the '08 game.

Arizona? Man, I don't think I ever been there before (Earl Clark voice).

Rivals released its first top 100 for the class of 2013 and the consensus appears to be that it's complete crap. The fact that there are zero players from the state of Kentucky listed would seem to back that up.

Louisville's RPI rating is now all the way up to 22, and the Cards have chance to make another significant jump considering their next two games are against teams rated 26th (West Virginia) and 1st (Syracuse) in the rankings. U of L owns five victories over teams with RPIs in the top 40 - Memphis (20), Connecticut (25), Vanderbilt (29), Seton Hall (33) and Long Beach State (36).

And finally, why wouldn't you shell out 60 bucks for this piece of art? Pre-owned, shmee-shmowned.