Playing against what has become a Big East rival on Big Monday figured to result in a rowdy crowd, but Cards fans who have been frustrated by this team's inability to explode watching it finally happen during an insane three-minute stretch in the second half led to an absolutely electric atmosphere. The Swop and Kuric fast-break dunks were the first "high five random people around you" moments of the season since Siva's game-winner against Vandy.

More than anything, I think Louisville fans were more excited about last night than outside observers might expect because it was finally the performance that gave hope for the fulfillment of preseason expectations. The previous four wins were crucial, but they all came against struggling opponents, and none could accurately be characterized as overly impressive.

Even taking the Jim Calhoun storyline into consideration, this is a Connecticut team with two lottery picks on its roster, and one which returned four of the five leading scorers from last year's national championship squad. I don't care if Steve Kragthorpe was coaching the Huskies on Monday night, for Louisville to hold a 30-point second half lead is impressive, and a pretty obvious sign that things are coming together.

"The Disaster at the Dunk" was an absolute embarrassment, there's no way around it, but if Louisville takes care of business and closes out Notre Dame the game before, I don't think any of the "Pitino has to go," "no way this team makes the NCAA Tournament" talk even happens. If the Cards beat the Irish then right now they're 20-4 overall and their only Big East losses are to a very good Georgetown team, and then on the road to Marquette without the services of Kyle Kuric.

As it is, U of L is 19-5, right in the thick of the battle for a Big East Tournament double bye, and without question playing its best basketball of the season.

The sky is right where it should be.

If you haven't watched the C-J video with the second half highlights yet, I highly recommend you change that. It gives a great indication of just how loud it was during the second half run and reminded me of three or four plays that I had completely forgotten about.

Dude in the white shirt behind the basket going crazy after the Gorgui miss dunk/make dunk play is easily the MVP.

As much credit as the Cardinals deserve for their performance on Monday, I think it is necessary to send a bit of ridicule in UConn's direction, because I'm not sure I've ever seen a team that appeared to want to walk off a floor more than the Huskies did in the second half last night.

Lamb, Drummond and company all talked after the game about being "embarrassed," but outside of Ryan Boatright, no one appeared particularly concerned with how their effort level would be perceived during the game.

I don't think the game is evidence that UConn is dead (they just blew out Seton Hall), but it wasn't an "everything went right for them, everything went wrong for us" situation either. Their chemistry issues, leadership issues, or whatever issues appear poised to keep them from being a legitimate title contender, but there's simply too much talent on that team for them not to make the tournament.

I'm convinced the impressiveness of Monday's win will only grow going forward.

Yes, Louisville, there is a Santa Strong.

Everyone, including Rick Pitino, has been comparing Kyle Kuric to Larry O'Bannon for multiple years now, but maybe it's Chris Smith who's going to have the O'Bannon-esque finish to his senior season. The guy is absolutely locked in right now and passing and rebounding better than he has at any other point in his Cardinal career.

Favorite first half scene came after Boatright single-handedly broke Louisville's press and went coast-to-coast for an uncontested lay-up. Pitino flipped out, called timeout and started going off on Chane Behanan. Behanan started to talk away towards the bench and Pitino grabbed him and yanked him back towards the huddle. Behanan then appeared to blame Gorgui Dieng, and gave Gorgs a little smack on the chest.

Pitino absolutely ripped both Chris and Russ at various points in the first half for their defense. Not sure what the twos were doing wrong, but apparently it was something egregious.

If I would have gotten Fat Wayned at the end of that game then I wouldn't have been able to walk straight for at least two weeks. Still, I wanted it.

Loved the student section chants for Wayne in the closing minutes. When he checks in for the first time, whenever it happens, the place is going to go nuts.

Not pleased, however, by the fact that Alf was relegated to the back right corner. Very solid job anyway, ladies. 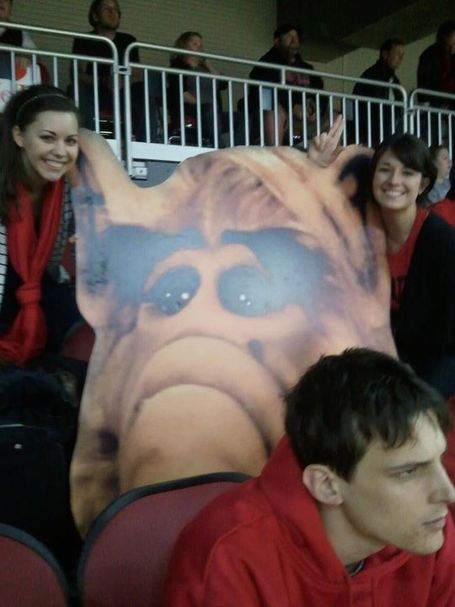 Not sure that guy could be more furious that there's a giant Alf cutout 10 inches behind his head. Either that or he was really focused on Tyler Oleander's performance in warm-ups.

Jeremy Lamb might be the most talented player in the Big East, but he's probably not fond of the Yum at this point. He didn't score at all in UConn's second loss to Louisville last season, and scored just seven points on 3-of-9 shooting last night.

He sounded more sullen than any other Husky in the locker room afterward.

How much would you pay for an extremely prominent spot on the pregame intro video? As long as I look cool, I'm definitely going three figures.

I think Andre Drummond is almost too nice. He looked overly apologetic after every mistake he made or foul he committed. It's a breed of Connecticut big man I am not familiar with.

Still, the man is almost definitely going to be a top five draft pick in June, and U of L just held him to no points and four rebounds.

Im telling you, this Gorgui statue is going to happen.

Russ's tights (or socks or leggings or whatever you want to call them) have to be the most Russ thing ever. 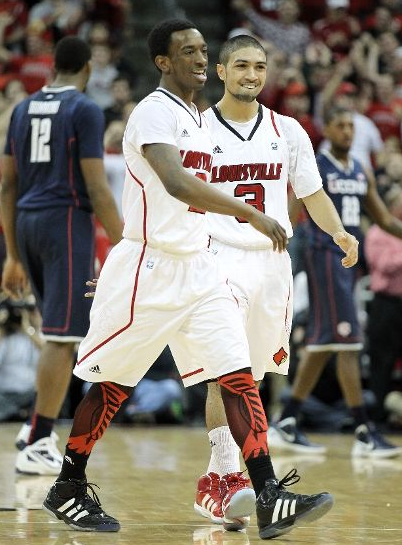 Also, I'm pretty sure Russ didn't stop talking during the final ten minutes or so of the game when he was on the bench. Much of the conversation appeared to be with Gorgui....who was on the completely opposite end of the bench. He also got in two really solid Pitino ass smacks.

Speaking of Marra, Full Suit Mike was back, and he was glorious.

Can't say the same for - as a friend put it - "8th Grade Confirmation Van Treese." Step it up, Stephan. We're watching.

Finally saw a clip of Russ's ankle injury and it looked pretty nasty. We definitely dodged a bullet there, although I'm not exactly willing to thank the injury gods at this point.

Apparently, among other unforgivable errors, he bashed Louisville consistently, called "Fab Melo" "Thad Matta" and referred to Chane "Bohannon" as a sophomore.

That man gets paid a considerable amount to do his job. Life, truly, is not fair.

Still can't get over how much I love Momaw Justice. 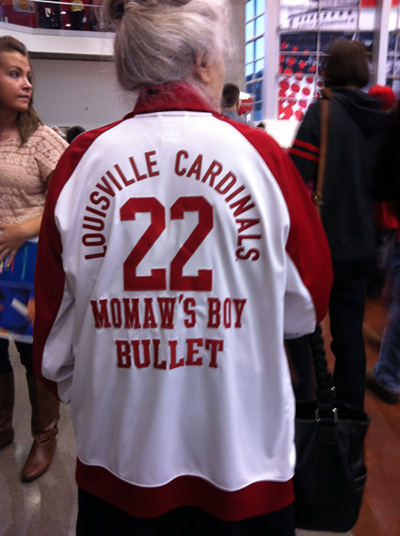 The first text message I received this morning stated the following: "Gorgui giggling in that C-J video is proof there is a God."

I also loved the follow-up video in which Chris Smith calls Gorgui one of the funniest guys on the team, and then has to clarify that it's "not just because of his accent."

It's exactly one week before Valentine's Day and this team is capturing my heart. 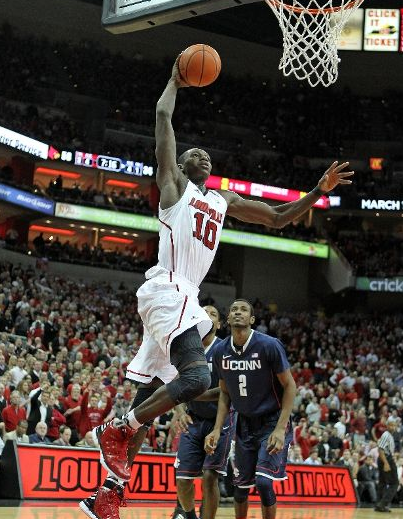 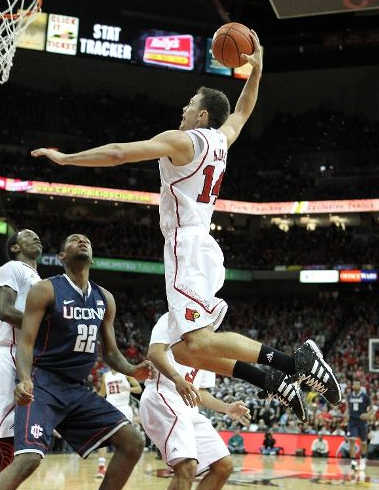 For whatever reason, Louisville/UConn games always produce the best pictures.

Congrats to the King for his SportsCenter top ten appearance (#9) for the dunk pictured above. Probably the loudest I've ever heard the Yum Center (wasn't at the Marquette game last year though).

LOVED the Connecticut fan who kept flipping the student section off after Boatright made the three and was fouled by Bullet in the closing minutes. Because that dulled the pain of the absolute beatdown your team was receiving on the floor. I'm also told Mama Boatright wasn't especially well-behaved either.

There was a woman sitting in the row in front of us wearing UConn pajamas who wouldn't shut up at the beginning of the game, then didn't say anything for the next hour and-a-half, then started ranting and raving about how the women's team was going to "kick our ass" as she was walking out.

I had a tremendous evening, personally.

Gorgui Dieng had six of our ten steals and Jared Swopshire had our only two blocks.

Apparently if you're a big-name Big East program coming into the Yum this season, you're going to get Swopped in the final minutes of the second half...hard.

Kudos to Jared for another tremendous out-of-nowhere performance when his team needed it.

Twelve more boards for Chane. It's like he's David Banner and a couple of weeks ago someone keyed his car.

I also loved when UConn called timeout after one of the big Louisville baskets and he came sprinting to mid court and Russ was sprinting directly at him. They both jumped, but knowing he would probably kill Russ if they made full contact, Chane sort of spun off of hm and then picked him up.

He is a large human being.

Well, this is what we've been waiting for: a hugely impressive performance and now a pair of major tests coming in the next six days.

If everything keeps coming together and these guys are able to win in Morgantown and then knock off the (currently) second-ranked team in the country a couple of days later...well, I'm not ready to wrap my mind around that level of excitement quite yet.

I enjoy being a Louisville basketball fan in Feburary.