Cards Use The Beautiful Game To Dominate Huskies

Share All sharing options for: Cards Use The Beautiful Game To Dominate Huskies

So, that happened. The weirdness that is the Louisville College Basketball Experience of the Early Teens continues. It didn't quite have the historical significance of the Syracuse/Freedom Hall/Kuric game, nor the Senior Night, capper-on-the-season feel of the Providence game last year, or even the "I can't believe we are beating these guys" feel of the last couple Pitt games, but wow, that was quite a game. 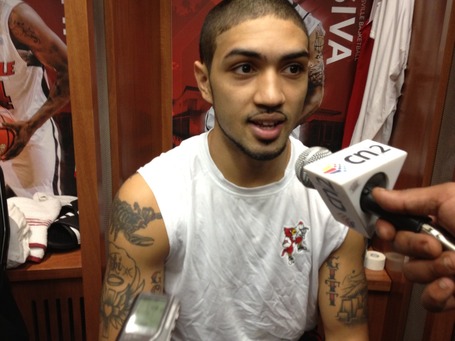 The score was 44-32 at the under-12 timeout. Then for the next 6 minutes, the Cardinals looked like a team playing their best possible game of basketball: dunks and steals and 3's and rebounds and dunks and omg Kyle Kuric just dunked all over you, bros. By the time Kevin Ware lobbed it up to Gorgui for an emphatic alley-oop at the 5:29 mark, the Cards led 67-38, the bench was jumping up and down, the crowd was loving it and UConn's players looked like they'd rather be shoveling snow on a cold Storrs morning than be on national television.

You know what it reminded me of most? Those NCAA tournament games (Stanford, Oklahoma, Arizona) where the other team's flaws play perfectly into our style, and things like Jared Swopshire getting an and-1 on and blocking Andre Drummond's shot and our coldest three point shooters (Swop, Siva and Chane) start draining them look completely normal and reasonable. And the other team just gives up.

You wonder why we can't play like that every game, then you remember that this is exactly what Pitino's entire philosophy is supposed to produce: soul crushing runs keyed by pressure defense, steals, extra passes, dunks and wide open 3s. It can work for small stretches in games to key comebacks and extend leads, and you appreciate it. But when it works like it did tonight (and in those NCAA blowouts and in some of the games last year) it really is beautiful to watch.