Share All sharing options for: UConn at Louisville: Your Big Monday Game Preview 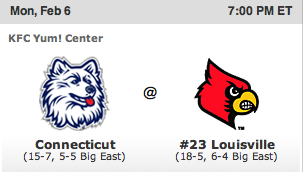 This game is huge. Both teams need this game in a bad way, and the Cards most important player may or may not play. Personally, I think Gorgui plays, but he most certainly will not be 100%.

I am excited to watch the potentially Gorgs vs. Andre Drummond Match-up. Gorgui was able to hold his own against Anthony Davis earlier this season for the most part, and Drummond will clearly be his second stiffest test of the season. Gorgui also presents the biggest defensive challenge to Drummond thus far in his young career so it will be interesting to see how he handles it.

In other news, I was wrong in my predication that (fat) Wayne would debut on Saturday night, but I still have tonight before I eat my words. I’m still not won’t be sorry that I think he will play.

The Huskies are coming off a throttling of Seton Hall and are clearly not phased by the loss (again) of Jim Calhoun. This has, unfortunately for them, become something of a regular thing, but they got back on track Saturday after a rather tough stretch themselves.

Slowing down Jeremy Lamb will be paramount for the Cards to get a win tonight. Last season he absolutely torched the Cards for 21 points in the game in Storrs, but was held scoreless in the rematch in Louisville. While Louisville won both games, the game in Louisville was not nearly as close and didn’t go to two overtimes.

Prediction: IF Gorgui play’s and can be effective (I think his general presence on the floor will be huge) the Cards will pull this game out at home 72-67. This game will be physical, close and hopefully very fun to watch.

Here are some stats n’ facts for you. 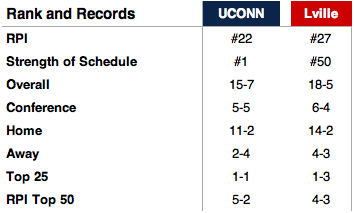