1. Chane Behanan is now fully capable of finishing around the basket. This much has been established.

I know a lot of people are saying that his career-day was the product easy basket after easy basket, but I think it's a critical mistake to ignore the fact that he's learning how to get himself in position for these bunnies. It's something that he wasn't doing at the beginnng of the season, and something that - given his size and our propensity for scoring droughts - he almost has to do for us to win basketball games.

Also, remember everyone screaming at Chane to dunk when he got the ball around the rim in December and early January? Yeah, he's dunking now.

The kid is really blossoming and has played as large a role in this current four-game winning streak as anyone on the team, with the exception of perhaps Gorgui Dieng.

But unbeknownst to most of us, Dieng's U of L teammates, while concerned, were withholding judgment.

"He does that twice a day in practice," Chris Smith said. "All the time."

"He goes down like he's been sniped," Kyle Kuric said.

I'm not willing to put it up there with the best Louisville dunks in recent memory, but I think it was definitely the most pleasantly surprising. I'm pretty sure after everyone settled down they offered up their own version of, "where the hell did that come from?"

4. Easily the best sequence of the game came at the very end. Russ was dribbling out the clock and the official told him that there was less than a one second differential between the game clock and the shot clock, meaning Russ would need to let one fly in order to avoid a shot-clock violation. Russ dribbled over to Pitino to inform him of the situation, and it was obvious that Pitino told him to just take the violation. Naturally, Russ can't resist faking a 30-footer from right in front of the bench as the shot clock is about to expire. 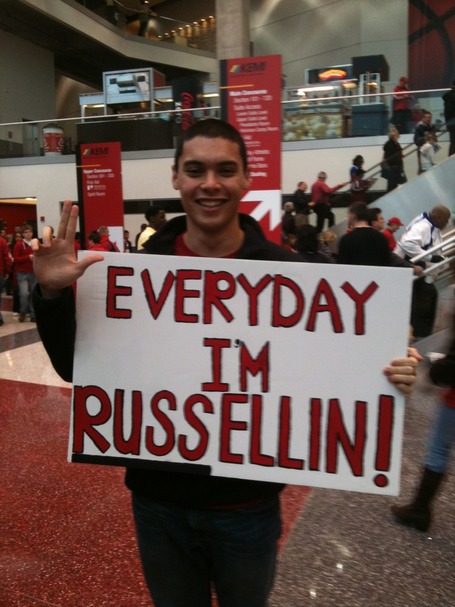 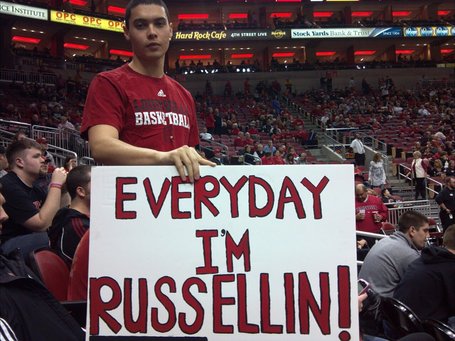 6. Gorgui Dieng somehow managed to block Quincy Douby's shot at one point in the second half. I'm not sure how it was possible, but it happened.

7. The one major negative from the game was perimeter defense. When this team actually does score consistently, it's gotten into the habit of being a little bit lax with its outside defense. That can't happen anymore heading into this crucial Big East stretch. Far too many of Mack, Miller and Carter's 3-point attempts were uncontested.

9. You never know which stretches were truly "crucial" until the end of the season, but these next three games certainly have a pivotal feel to them right now.

Despite all the injuries, offensive lapses and seemingly inexplicable losses to Providence and Notre Dame, this team is 18-5 overall and right in the mix to earn a top four finish in the Big East once again. Next on the slate, however, is a trio of games against the No. 2 team in the country, perhaps the league's most talented team (Connecticut) and a trip to a place (Morgantown) where the Cards have taken losses in each of the past two seasons.

Whether U of L is fighting for its tournament life or playing for an elite seed come late February could very easily be determined over the next week and-a-half.

10. I had flashbacks to Preston's freshman year when Angel Nunez was in the game because I just wanted him to get a clean look from three so badly. I loved getting both he and Price into the game early on. I know it was against a Rutgers team that is struggling right now, but it definitely didn't seem like the team's level of play dropped off at all.

It's February in Louisville, AKA running season.