Share All sharing options for: Louisville Vs. Rutgers Game Preview

The week of Louisville basketball-less agony is nearly over (thank GOD!). While these full weeks off are never fun, our guys most certainly needed the break. We’re starting to get healthier and according to Rick’s presser this afternoon, the team is having a ton of fun right now and seems rejuvenated.

It also appears that (fat) Wayne Blackshear has finally returned to practice, which can only mean one thing…He has finally kicked the milk cold turkey. That can be some really tricky stuff but I think we can all agree it’s for the greater good in all involved. I would hate to see him fall off the wagon right now as he’s been doing so well giving up, you know, the milk.

This is the start of a very important stretch for the Cards and these next two home games are absolutely must win’s at this point in the season.

Rutgers is a strange team to me. They can obviously beat anyone as they have taken out Florida, UConn, Notre Dame, and Cincinnati, but they just can’t seem to stay consistent. Mike Rice has done a fantastic job there in his year and half at the helm and they will probably be one of those annoying programs over the next 3-5 years (similar to Seton Hall) that isn’t great but just a thorn in the side of everyone.

I look for the Cards to come out swinging after the week off and take care of what needs to be taken care of. It’s also February and I think we all know that means Pitino rarely looses.

Prediction: A hard fought game on both sides, but Louisville at home+ a week off+ February factor= 75-62 Cards.

Other Prediction: Now I can’t imagine that Pitino would dare to play Wayne Blackshear for the first time on the road. That would be semi-anticlimactic. I have a feeling we see him briefly in this game. The timing just seems right to me. He has been practicing this week and, well, I just think it’s Wayne time. If not Tomorrow, I’d say Monday vs. UConn is a good bet. If I’m wrong, I won’t be sorry about it but if I’m right, then take that one Pitino-ease.

Other Other Prediction: Might as well say it now. Nice pass Russ.

Here's some stats and facts for your viewing pleasure. 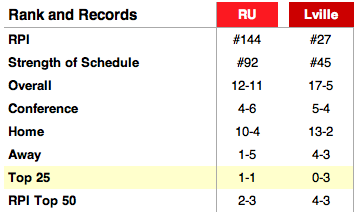 For those watching on TV tomorrow, It's as if we weren't put through quite enough torture by Jason Benetti and Paul Biancardi during the Seton Hall game. Enjoy them...I'll attempt to not bleed out of my ears with all of you.

I leave you with some solid T-Will love from Rutgers games past. Enjoy.