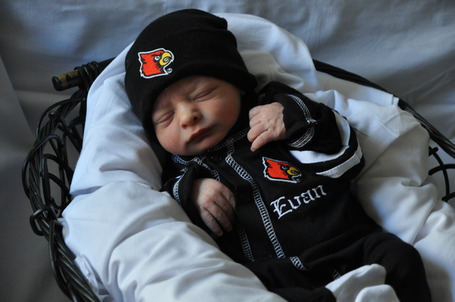 Evan Charles was born just hours before last Saturday's game against Seton Hall, and got to experience his first Cardinal victory from the comfort of his father's ams.

A thousand and three apologies for all the site issues late yesterday. It was a network-wide thing, but it appears the SB Nation tech people have it under control.

Apparently most of the damage from the rioting last night has been cleared up, although Frankfort Ave. is still in pretty rough shape. I'm just glad the site was restored when it was so there's still a Louisville to wake up to this morning.

Thanks for caring, 'Cloids, and thanks for sparing Andy's TV from your rage. It was a thoughtful gesture during an otherwise thoughtless occurrence.

In case you were wondering, yes I do already a pre-penned post in the event that Louisville wins a national title in football or basketball and Cardinal fans riot, and yes the second line from the previous paragraph does appear in that post.

I'm also prepared if Tom Jurich retires, Ryan Gosling is named women's basketball coach, the NCAA declares CardsFan922 eligible to play on the field hockey team, or if word comes that Brad Gianiny has contracted lupus. It's a touching tribute.

The biggest loss from the site outage was the 75% completed news and notes post that was supposed to go up last night. it's why you probably saw me out there with the rioters.

I'm not going to be able to touch on everything I did last night (phrasing), but just know that it was the greatest post in the history of Card Chronicle.

I began that tragic post with an extended spiel on Rick Bozich's Thursday column, which had U of L fans understandably upset. This spiel will be slightly shorter.

The column was an incredibly one-sided look at the Ace Wales situation, which painted both Wales and former commit DaMarcus Smith as victims cast aside by a U of L football program looking to get big and bad by bringing in top-level players from Florida.

Not once did Bozich mention or even hint at the fact that Wales has held a scholarship offer from Louisville for two years or that Smith was still wanted at U of L after Teddy Bridgewater committed. In fact, Strong even made sure that Smith was aware of Bridgewater's commitment before the news went public. There was an extremely brief mention of the shady recruiting controversies which played a considerable role in Smith's ending up at Western and which could have been completely avoided had he simply honored his commitment to Louisville, but that wasn't expounded upon.

These facts didn't really fit with the image Bozich was trying to portray, and so he opted to simply omit them. I thought the whole thing was extremely unfair and - accurate or not - read like something written solely to drum up controversy and attention.

When Chris Smith's struggles first started near the end of December, I made the statement that I wished Chris could be visited by a Dickens ghost from the future who could let him know that he's not going to play in the NBA. It's not that I don't want him to make money playing the game, it's just that it seemed obvious his focus on the future was having a negative effect on his game. He wasn't the rock solid Chris Smith from 2010-11 who only seemed to care about playing his part and picking up victories.

Apparently, the desired wave of reality has washed over Smith, and he's back to the reliable (and stylish) CS5 we all know and love.

"It's a focus thing for me," he said. "I'm not really worried about too much right now. I'm not worried about where I'm going to be in the future. That's where my little slump came from. I had a lot of thoughts going through my head. Now I'm having fun out there and not worrying about too much."

He said coach Rick Pitino talked to him about concentrating on the present and not the what-ifs.

"It can affect anybody a lot," Smith said. "Coach Pitino and I met, and he told me not to worry about things, just to stay positive and focused and everything will happen. It's difficult because as a person you have a thought about where you're going to be next. At the same time, you have to pull that back in and know that everything will work out."

"The main thing is to stay positive and keep winning," Smith said. "As long as we're winning, everyone's dreams will come true. That's something Coach talks to us about. Winning creates opportunities."

A friend texted me early Thursday morning with the following picture of Russ Smith sprinting across campus to class: 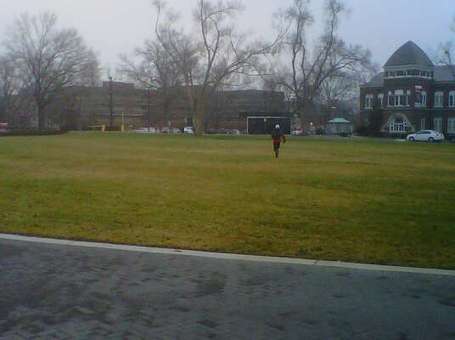 I don't know if you've heard, but everyday...every single day...that man is Russelin'.

Freshman corner Andrew Johnson caused a bit of a stir with a tweet yesterday guaranteeing that Louisville will win a national championship before he leaves the program. He then proceeded to get into it with several Kentucky fans who voiced their opinions on his prediction.

Dexter Heyman accepted the Howard Schnellenberger award for his MVP performance during this year's U of L/UK game (we won) at last night's Paul Hornung Award Banquet.

The overwhelming word from the folks in attendance was that his speech was phenomenal. Apparently it was so good that Mike Ditka (according to WAVE-3's Kent Taylor) told him afterward: "If you don't continue on in football, get your ass in politics."

Dex was a fantastic ambassador for Louisville football while he was here and he's going to achieve tremendous things in the future, regardless of what he chooses to do.

A recap of where Louisville's 2012 wound up being ranked nationally:

During the period when I was first gaining a grasp on the English language (ages 0-27), I had two older brothers who were already in high school. Suffice it to say, I learned words and combinations of words that generally aren't associated with a 3-year-old's vernacular.

During this period I was also apparently a big fan of the show "Wheel of Fortune." The only problem was that "fordoo" was as close as I could get to pronouncing "fortune."

So one night the Rutherfords are doing whatever the Rutherfords did in the mid-to-late 1980's when a completely unprepared 3-year-old Mike Rutherford is stunned to see that his favorite show is currently appearing on the television set. In a line that would be repeated countless times by my brothers in the succeeding years, the little guy points and screams: "OH GOD DAMN! WHEEL OF FORDOO!"

I bring this up only because this was my precise reaction upon reading Pat Sajak's admission that he and Vanna White sometimes used to get blitzed before the taping of their shows.

Kevin Houchins and his dad on Signing Day: 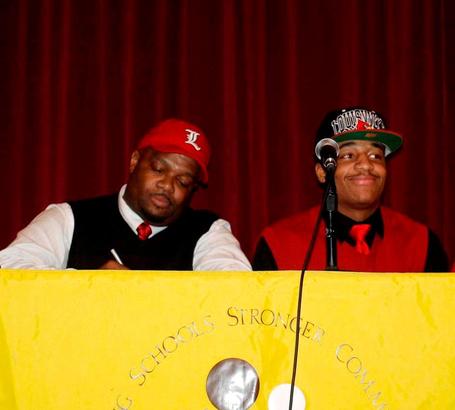 And DeAndre Herron making it official whilst wearing Card garb: 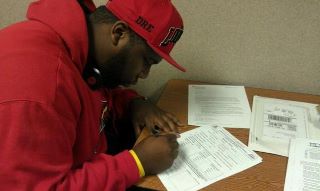 A report from a Rhode Island publication says that Nerlens Noel is leaning towards picking Providence. Les Miles playing Hamlet off-Broadway is probably more believable, but what if he did end up at PC? Ed Cooley would have one the top five recruiting classes in the country...and with that hair.

Sampson was the best player on the floor which included the likes of Michigan-bound big man Mitch McGary (#21 on ESPNU's Top 100), NC State committee TJ Warren (#28 on ESPNU's Top 100) and guard Aaron Thomas who is headed to Florida State.

Sampson told GoLocalProv.com that he is being heavily recruited by many top schools such as Kansas, Louisville and Providence among others. He did say that he has plans for an upcoming visit to Kansas in the coming weeks and wants to visit Providence as well.

Landing Sampson would be a much bigger deal than I think people realize. He would be a huge asset right away.

A good AP story on Louisville's recruiting class and the success Charlie Strong has had in the Miami area.

A solid off-the-court honor for both Peyton Siva and Kyle Kuric.

University of Louisville men's basketball student-athletes Kyle Kuric and Peyton Siva have been named to the Capital One District 2 Academic All-District 2 men's basketball first team, as selected by the College Sports Information Directors of America (CoSIDA). Inclusion on the all-district team will move both on to consideration for Capital One Academic All-America honors.

Fox has an extensive story on the recruitment of Dorial Green-Bekham, the top-rated player in the class of 2012 who signed with Missouri earlier this week. Of particular note is the following quote (rhyme) from his mother regarding Bobby Petrino.

"Besides Arkansas' graduation rate, Tracy Beckham was also worried about Petrino "having a little reputation," which she hesitated to discuss.

"It's what everybody will tell you, that he left his team in midseason," she said in reference to Petrino's resignation in 2007 as coach of the NFL's Atlanta Falcons after 13 games to take his current job. "There are other teams that bring that up a lot."

It's Friday and this made me laugh so I'm posting it. 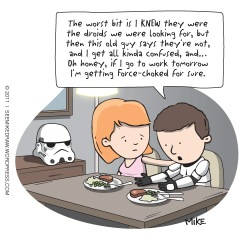 Really hope the kids today have at least some base Star Wars knowledge.

Scout.com's Evan Daniels reports that class of 2013 center Moses Kinglsey will be visiting Louisville this weekend. Kingsley is a 6-9, 210-pound big man out of Mississippi currently rated 33rd in the class by ESPN.

Louisville's food scene has been getting a lot of love recently. The latest comes from Zagat, which names The Ville as the only American city in its "8 Best Foodie Getaways Around the World" post.

I'm just going to assume "Foodie" doesn't need correcting. I don't know, non-sports sites frighten me to the point where I'll believe or question the validity of just about anything I see there if I'm told it's right or wrong.

Steve Masiello continues to improve upon his tremendous debut season Manhattan. The Jaspers are the surprise of the MAAC, sitting in a first-place tie at 10-2 in the league just a season removed from going 3-15 in the conference and 6-25 overall.

Fab Melo is back for Syracuse.

A Bay Area blog gets nostalgic for Luke Whitehead.

Not a bad effort here: 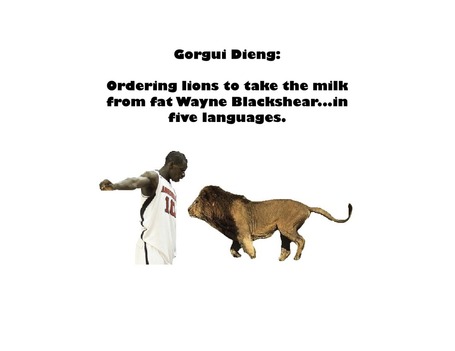 I like that you didn't go the conventional route. The world loves a risk-taker.

The latest haps on the West Virginia/Big East kerfuffle.

And finally, a piece on the incessantly surprising 2011-12 Rutgers basketball team.