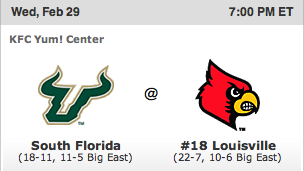 Senior night is always an emotional experience. The two that I can recall attending were perhaps the most tear-jerking sports experiences I’ve had. Saying goodbye to Reece was terribly sad after how outstanding he was for four years, and the final game at Freedom Hall was clearly more than just the last home game for Reggie, Jerry and Edgar.

Tonight, we don’t say goodbye to any 1,000 point scorers, five star recruits, or future pro’s, but three guys that seem to be headed down the right track of life and that have given us some extremely fond memories.

These three guys epitomize this teams new motto of "Louisville First". Kyle and Chris gave up their scholarships for this season for the greater good of not only this team, but the future of the program. Swop battled back from a gruesome injury and has been nothing but solid this season in spelling Chane and picking up the slack lost with Rock’s injuries.

These guys don’t seem to care about how many shots they get or how many minutes they play. They genuinely love their teammates and love being part of the Cardinal family.

Make no mistake about it, these three guys have been more than vital to the success of the team this season and they will be missed. It will, as always, be very difficult to loose guys who have been part of two of the most loveable Louisville teams I can remember, and hopefully they get what they deserve tonight, which is the chance to get taken out with a standing ovation from 22,000 red clad fans with a victory in hand.

That leads me to the game itself. I’m sure you are all well aware by now that South Florida is one of the big surprises in the Big East. They are currently suffering from their self-inflicted poor non-conference play/scheduling and while they are 11-5 in the conference, they still seem to be working their way into the tournament field.

Much like the Cincinnati game last week, this is an absolute must win for the Bulls. This is also a game we simply can’t afford to loose. This is a game will play a big role in which Big East Tournament seed we receive. With a loss we are all but assured of the seven seed and with a win we stay alive for the five. We have yet to beat anyone ahead of us in the Big East standings this season, so tonight could be a big step for us and would provide some much needed momentum heading into Syracuse this weekend.

South Florida plays absolutely tenacious defense, having not allowed an opponent to score over 56 since February 4th. This team is very scrappy and has fantastic leadership with Senior Augustus Gilchrist (he’s been around for literally my entire life).

We absolutely cannot afford another horrific shooting night against these guys, because much like Cincinnati, they will make us pay.

Prediction: It’s senior night. It will be low scoring and each possession will matter, but I think we send our guys out the right way. 61-52, Louisville.

Here are some stats, facts, n’ line-up’s for you. 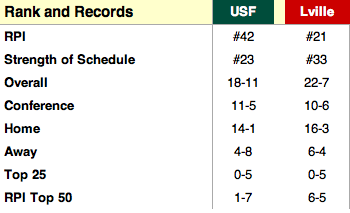 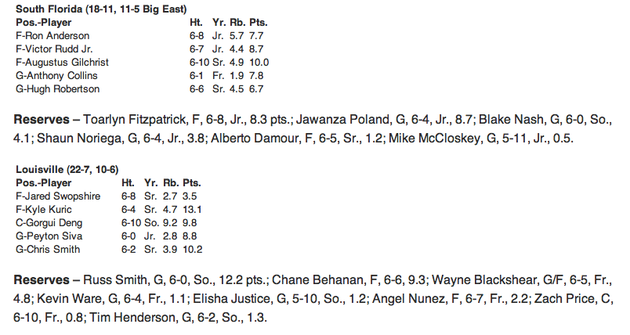 Finally, a little VillenHD, Mau5, and "Van Treese is underrated!" to get you in the mood.

Just a reminder, tonight is a red out. Don't be that guy/girl.