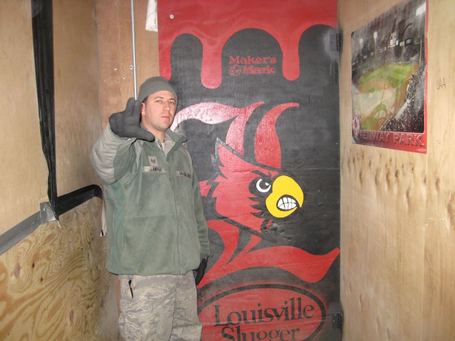 Lance Lawfer starting the news and notes week off the right way.

Georgetown's victory over Notre Dame earlier tonight officially ended any shot Louisville had at earning one of the four double byes for the Big East Tournament. There is now a 78% chance that the Cards will carry either the six or seven seed into Madison Square Garden.

What has to happen for Louisville to get each possible seed:

If Louisville beats South Florida on Wednesday night and wins at least one game in New York, it seems highly likely that the Cards will wind up with a better NCAA Tournament seed than Big East Tournament seed. Pretty crazy, especially when you consider that this may be the weakest the conference has been since U of L joined up in 2005-06.

The U of L women's team wrapped up its regular season with a 63-53 win over Seton Hall. The conference tournament bracket won't be set until the other teams finish their seasons, but the Cards are assured of a first round bye. 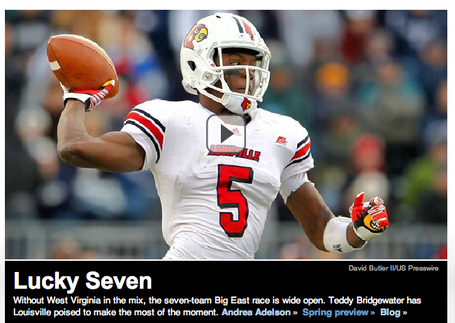 Every now and then I get a little glimpse of how excited/hopelessly desperate for Cardinal football I'm going to be come June/July, and it's pretty bad. Let's just say things are on fire and I only recognize about three of the other people in the scene...and there are lots of other people.

On a somewhat related note... 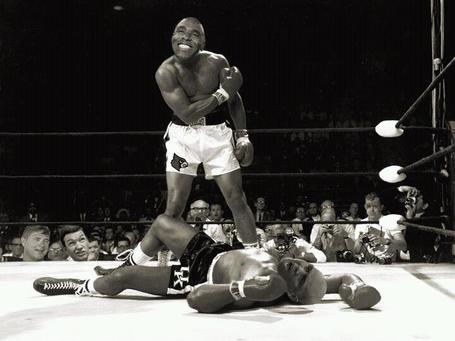 Rick Pitino spent last Friday night watching class of 2014 star Jaquan Lyle out of Evansville. Lyle was then a guest at Louisville's win over Pittsburgh on Sunday. Now, according to recruiting analyst N.D. Kendrick, Lyle has a scholarship offer from U of L.

Your Cardinal softball team continued its domination of the early part of the season, moving to 12-0 after a three-game sweep of Creighton. That's payback for the first round in '99, 'Jays. I also distinctly remember burning the roof of my mouth on some leftover Wick's pizza during halftime of that game. This wasn't payback for that...but it's coming.

The Cardinal baseball team also had a successful weekend, sweeping visiting Oakland by a combined score of 23-14 to move to 6-1.

Louisville will be back in action on Tuesday when they host Eastern Illinois at 3 p.m. Skylar Meade, a pitcher on the 2007 College World Series team and the second best St. Matthews Little League player of the mid-to-late 1990s, is now the pitching coach for the Panthers.

I had seen a few variations of these before, so I was ready for this: 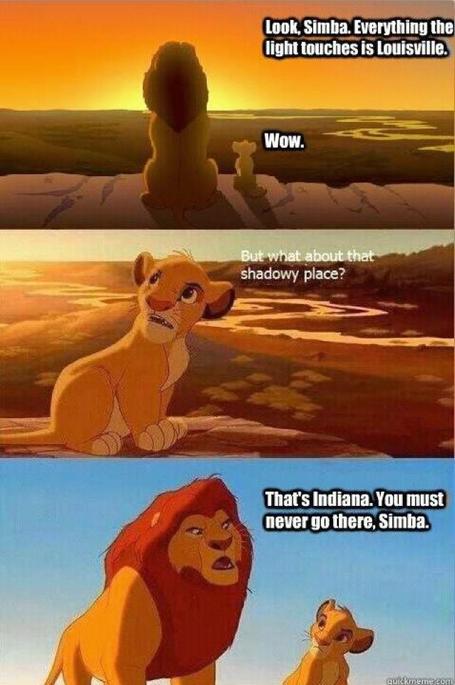 I actually caught a solid chunk of The Lion King on ABC Family Saturday night (that sentence just happened...this is your future, 18-23 year olds), and it still amazes me just how hard Rafiki balls. Harder than a concrete slab in Liam Neeson's hands. Taken Liam Neeson, not Love Actually Liam Neeson. Probably didn't need to explain that.

Yeah and if you ever come back, WE'LL KILL YA.

On another "speaking of which" note, this is the best thing to happen in an office ever: 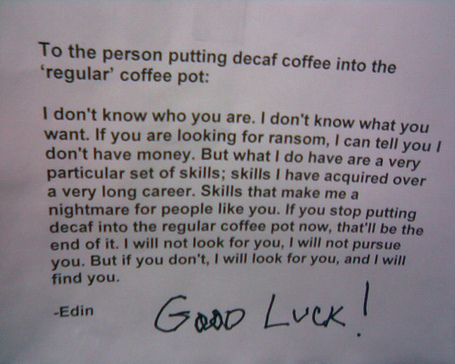 Lost Lettermen grades the college basketball rap anthems and gives a Louisville song I'd never heard before an F and the new Bellarmine song an A.

Great stat from our man Mark Ennis: On this date one year ago, none of the four teams that reached the Final Four were ranked in the top 15 of either poll.

I vaguely remember a Shawshank Redemption quote about hope that used to make frequent appearances on AIM away messages. If only AIM were around today, I would totally copy and paste it because it's relevant to the fact stated above.

I'm also looking for a good girly quote from Almost Famous, but I just can't get a handle on it.

Class of 2013 point guard Tyler Ennis told SNY TV that Louisville, Georgia Tech and Arizona are the schools currently recruiting him the hardest.

The KFC Yum Center fired general manager Ted Nicholson today. An intriguing move considering the arena is set to host the second and third rounds of the NCAA Tournament in a little more than two weeks.

Mike Rutherford has not been named as a candidate for the position...until now (doors fly open, fireworks go off, "Rockstar Poser" blasts, I stroll in wearing my big game Louisville fleece).

I don't want this to ever stop. 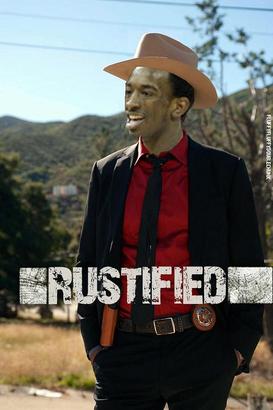 And finally, this is the first of multiple reminders that Wednesday's game against South Florida is a "Red Out" in honor of the seniors. That means wear red. Painting yourself red is Ok. Wearing a green shirt is not Ok. Wear red or be red.