Share All sharing options for: Offense Sputters Again As Louisville Falls To Cincinnati

I alluded to it earlier in the day, but I didn't think we were going to win this game. That said, the way we lost certainly didn't make the evening any easier to stomach.

Sure, Kyle Kuric and Chris Smith probably aren't going to have any more nights where they're a combined 0-for-15 from the floor, but using that as the sole basis for U of L's loss tonight - though probably accurate - belies the fact the Cards are a pretty easy team to defend right now.

There are three games left in the regular season, and it's time to accept Kyle and Chris for what they are. No more of this "they've got to start beating guys off the dribble" or "they have to develop a mid-range game" talk. Both are extremely solid players who are going to leave it all on the floor every time they step out there, but each can be taken almost completely out of the game by opponents that play great man-to-man defense. 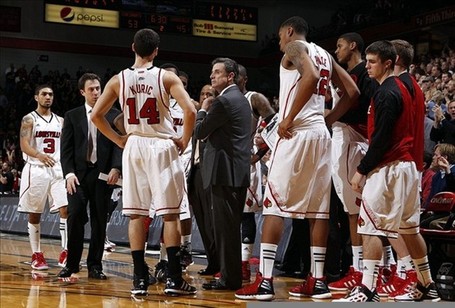 When teams do what Cincinnati did Thursday night, Louisville is left with only a handful of ways to score: Peyton scoring off the dribble or feeding post players for baskets around the rim, Russ doing Russ things, getting good looks or easy baskets in transition, or someone random (Swop, Wayne, etc.) coming out of nowhere and going off. Peyton stepped up late, Russ didn't play well, the Cards didn't generate many turnovers and didn't hit enough shots to press and Wayne Blackshear was out with a shoulder injury. The result is our guys played their asses off, scored 56 points and lost by four.

I'm definitely not willing to go so far as to say it cost us the game, but I really, really think Wayne could have helped us tonight. Not only does he have the ability to score off of shots he creates for himself, but Cincinnati defenders having that knowledge would have forced them to focus more on him and in turn create the scoring opportunities for other guys which simply weren't there tonight. I think Wayne's absence was a bigger blow for both this game and the season going forward than a lot of people will give it credit for.

Gorgui's importance to this team has been established a hundred times over, so there's no point in spending too much time on it. He played off his ass before getting into foul trouble and showed more emotion than he had at any other point in his Cardinal career. I still don't understand the call on the third foul. If it was on anyone, it had to have been on Chris Smith. That whistle completely changed the game, but we had our fair share of breaks as well (my God the Russ slip) so it would be disingenuous - as it usually is - to act like the stripes cost us this game

Apparently Gorgui came out of the locker room not excited to talk to the press about the loss and said, "I don't speak English." Kind of awesome.

When the topic of Gorgui's foul trouble came up during Rick Pitino's postgame radio conversation with Bob Valvano, he started to get a little angry. He, like all of us, didn't understand the third foul call, and was also angry about the fourth foul call, which, he says, the official who blew his whistle acted like was a no-brainer. He then said that officials in general are "really starting to get under my nerves. I don't know who the hell they think they are." He also made mention of the traveling call late in the game on Gorgui where it appeared no one had possession of the ball.

Pitino also praised the Cincinnati crowd for creating such a hostile environment (not exactly a pristine blackout execution, though...my words, by the way). He said this team needs its fans to create the same type of environment on Sunday against Pitt, before adding "without some of the classless behavior."

The bottom line here, to me at least, is this: I still think the team is playing good, certainly not great, basketball, and I still think the potential is there for a run. That said, it's impossible to ignore the fact that Louisville currently has no wins over a Big East team with a winning league record, and no eye-popping non-conference victories either. Wins over USF and Pitt aren't going to wow anyone, and they're obviously going to be up against it at Syracuse on Senior Day. In terms of seeding, this year's Big East Tournament is going to be more important for the Cards than any other since they joined the league.

We need Siva to build off of the way he played in the final couple of minutes tonight. There's no one in the country he can't beat off the dribble, so if he's playing with confidence and making the right decisions once he has that step, obviously we're an exponentially better team. We touched a little on Kyle's limitations, but as will be said 134 times over the next 24 hours, we're not going to beat anyone with him shooting 0-for-11. If teams are going to press up on him, then he has to aim for the back of the rim (everything was short tonight) and drill a handful of semi-contested shots. Russ is Russ. He's going to carry you back into games and he's going to almost single-handedly lose leads for you. You have to live with it. And even though I hate putting any sort of pressure on him given the circumstances, I really think Wayne Blackshear is key. If he can score around eight points a game and create some space on offense for his teammates, then he will be an invaluable part of any success this team has going forward.

Tonight was frustrating, there's no question, but by no means was it cause to give up hope or to be less enthusiastic about the remainder of the season. On a neutral floor, this team is capable of hanging with anyone, and that alone is reason enough not to throw in the towel. The NCAA Tournament is the ultimate "all you can ask for is a shot" event in sports, and U of L is going to get its shot. You should be excited about that.

If you still think you're going to have trouble getting to sleep tonight, just think about how you aren't the person who had a front row seat to a Louisville/Cincinnati game in Cincinnati and made the conscious decision to wear a Kentucky Wildcats sweatshirt. Things could be far, far worse. You could be that person.