Share All sharing options for: This Louisville/Cincinnati Game Harkens Memories Of Childhood

Time's reputation for distorting the past is well established and equally deserved. It's so good at what it does that at some point in every person's life they begin to doubt - to some degree at least - the validity of their own memories.

I bring this up because in my surely flawed mind, 90% of the games Louisville played against Cincinnati in the 1990s took place on Thursday nights at 9 p.m. on ESPN, the same scenario we have in place this evening.

Most people experience several drastic life changes in their 20s, 30s or 40s, but there's a sense of familiarity inherent in established adulthood that makes all the rearranging feel like it's still part of the same "era," for lack of a better term. The same can't be said for youth, where the period from ages 6-13 essentially encompasses three or four different lives. It's likely this phenomenon that has made late Thursday night games against Cincinnati feel like more of a staple of Cardinal basketball in the '90s than they may have been for other generations.

Still, the memories feel fresh to your faithful narrator.

This was a period where Cincinnati was at times the best team in college basketball, and almost always the baddest. The rivalry between the Cardinals and Bearcats was Conference USA basketball, and it always demanded a national audience.

In the days leading up to the games against UC, my friends and I would update each other on the status of our persuasive attempts to earn permission to attend the game or at least stay up and watch it. Some would celebrate an unparalleled triumph of youth, others would shed tears and be relegated to an early morning update from their father or The Courier-Journal.

The one memory I have that stands out above all others from this period was basking in the glow of the '96 victory in my old living room and realizing that The Late Show With David Letterman was on. The Cards just beat Cincinnati, Letterman's on, I've got school tomorrow, and I'm still awake; it may have been the most celestial moment of my childhood.

The rivalry with Cincinnati was never on par with Kentucky (nothing is), but it certainly had its own place. While disdain for Lexington Basketball Academy is an almost inherent aspect of being a Louisville fan, the Bearcats earned their ire. The players were dirty and didn't care (Kenyon Martin is still the most intimidating human being I've ever been in the presence of), Bob Huggins' antics made him perhaps the ultimate U of L villain of the '90s, and more times than not they got the better of our beloved Cardinals. All of these factors made the pair of annual games two of the biggest events during winters in Louisville, and made the victories incredibly special. 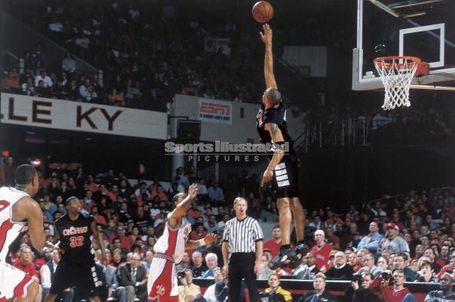 Again, nothing can compare to the Louisville/Kentucky rivalry, but those games against Cincinnati are still some of my first thoughts whenever the topic of Freedom Hall is brought up. They were special, especially for someone in that twilight era of fan development.

Then the rivalry tapered off.

First, it was because Cincinnati dominated. The Bearcats won eight straight games over Louisville between 1997 and 2001, making their own overly generous contribution to the "Fire Denny" movement. Things were revived slightly when Rick Pitino arrived and both programs experienced success in the early part of the last decade, but the old mutual disdain was noticeably lacking. The pair of programs then made the move to the Big East in 2005, Bob Huggins resigned, and UC has never been able to get back to the heights it reached under him.

The rivalry had survived periods where one of the two had dipped before, mostly because the teams played in conferences that lacked a multitude of fellow premier programs. This wasn't the case anymore, and with Cincinnati turning into a league doormat, the Cardinals had several other ranked Big East foes to steal their focus.

The Bearcats have improved under former Pitino assistant Mick Cronin, winning a game in the NCAA Tournament last year and beginning this season ranked in the top 25. They even threw in a nasty brawl with rival Xavier earlier this year to try and revive the old bad boy image for us.

While the Louisville/Cincinnati rivalry is light years behind where it's been in the past, I must admit that today sort of has a throwback feel to it. U of L and UC are tied in the Big East standings, the Bearcat fans are planning a "blackout" for the game, many excited Cardinal fans are talking about making the trip up I-71, and of course it's a 9 p.m. Thursday night contest that will appear on ESPN.

The fear of Kenyon Martin leaping through my television screen and brandishing a weapon is gone, but this would still be a nice (school) night for a postgame victory celebration with Dave.