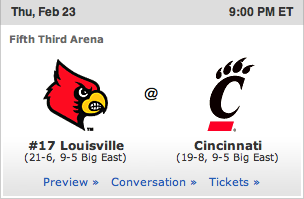 The home stretch of the season is officially upon us. With only four games left before heading to the Garden, it’s time to grind and fight for seeding on multiple levels.

Tomorrow night’s game will have big implications on the Big East standings moving forward. With both Louisville and Cincinnati currently sitting at 9-5, the winner will take a big step not only in procuring a higher seed, but will also stay alive for the ever-precious double bye.

This is a very similar situation to our trip to Cincinnati last season. We were pretty comfortably sitting in the NCAA tournament around the same seed range we sit in currently, while the Bearcat’s were fighting to get themselves on the right side of the bubble.

While Cincinnati sits with a 9-5 conference record as well, they are the product of an exceptionally soft non-conference schedule as well as a horrible home loss to Presbyterian.

In some sense, Mick Cronin’s bunch needs this game more than we do. A victory over a top 20 team would likely keep them on the right side of the bubble barring a collapse.

On the other hand, we need this game to continue to boost our seeding. The way I see things right now, Louisville is currently a four seed in the big dance. That can obviously go either way depending on how the rest of the season plays out, however, I think it would be extremely advantageous for this team if they could wow the selection committee enough to get the bump to the three-line.

Now, I’m sure many of you who just read that line say, "of course it would be advantageous to have a higher seed", but it’s a bit bigger than just the number next to your school.

The mid major field is extremely strong this year and several of them really scare me, especially the one’s I currently see on the 13 line (which is the first round opponent of the four seed). I could see the mid major’s that could potentially fall on the 13 line upsetting a team like us, as well as many others, and I believe I speak for EVERYONE, that just can’t happen again this season.

We must continue to play well tomorrow and not be derailed from the ultimate goal. I think we are all well aware that this is a special rivalry and no matter what the difference in talent level is (it happens to not be particularly wide right now) both teams should be hyped.

Fifth Third Arena is also a very tough place to play. It’s not enormous by any means, but their fans are up and loud the entire game. We have been playing quite well on the road of late, so I have no doubt that we can weather whatever storm is thrown our way.

As was seen in the DePaul game last weekend, when we need buckets, Chris Smith and Kyle have become extremely reliable down the stretch of games, which is exactly what you want to see from your senior captains. I fully expect them to continue to play at a high level as the season winds down, with tomorrow being no exception.

I also am looking for a big bounce back game from Chane. He was clearly not himself on Saturday as he battled through the flu, but with him back to full health, I expect a big time game from him as he returns to his old stomping grounds. It's my personal belief that in his recovery from the flu he has done some meditating and maybe some yoga and is currently at one with his inner Behanimal.

Game Prediction- Both teams need this game in a big way, but I really like how this team is playing. We absolutely cannot afford to get in another 17-point hole because I don’t see us climbing out of one against this team. I look for a very steady performance out of our guys and I think we get another much needed road win, 73-65.

Here are some stats n’ facts for you. 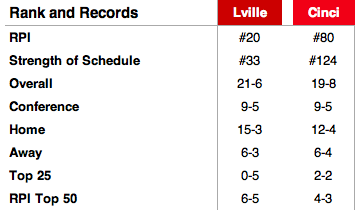 Here's a little 2010 Throwback Villen. I remember being so excited when this game came on and they showed the starters and Rick FINALLY went with Samardo and TJ. I was far less excited post-experiment, but the victory was still sweet.

One last reminder- for those making the trip up to Cincinnati for the game, be sure to NOT wear black, as the game is being advertised as a blackout. How awkward would it be to not clash with the home fans?