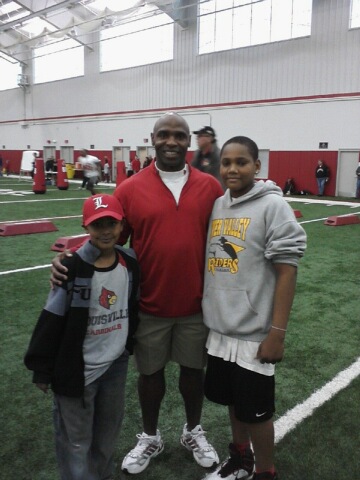 Anthony and Desmin spending some quality time with the two-time defending Card Chronicle Man of the Year. Also, Desmin (right) is 9-years-old. Check out his size compared with Strong.

Linebacker U, man. Join the fray nine years from now.

There's no question that Louisville is playing its best basketball of the season, and the rest of the country is beginning to take notice.

Jay Bilas (swoon) said on national radio Thursday that Louisville was the "off the radar" team with the best shot of getting hot and crashing the Final Four. Its' a sentiment that a few others have begun to echo during this period where the media falls over itself looking for "sleepers."

ESPN, for its part, has bumped U of L up eight spots to No. 14 in its latest power rankings, even after the loss to Syracuse.

Since the pair joined the conference together in 2005, Louisville has won (including tournament play) 85 Big East games, while DePaul has won 25. To put that into perspective, if - from now until whenever - DePaul ran the table in the Big East regular season and tournament while U of L failed to win a league game, it would still take the Blue Demons almost three years to catch the Cardinals in total conference wins.

U of L probably should have done a better job explaining the whole #L1C4 thing before bombarding fans with it on Monday. For the many who have asked but haven't received a response, it stands for "Louisville First, Cardinals Forever."

It's a noble branding effort, but I'd be lying if I said I was the biggest fan. The brand/hashtag/phrase/what have you fails in two of marketing's most crucial areas: 1) It's not catchy. 2) It's not easily recognizable.

U of L seemed content with "Card Nation" earlier in the basketball season, but my guess is they'd prefer not to share the "nation" part with Lexington Basketball Academy. It's understandable, and hopefully this new tag will catch on.

It would be hard for me to love this any more. 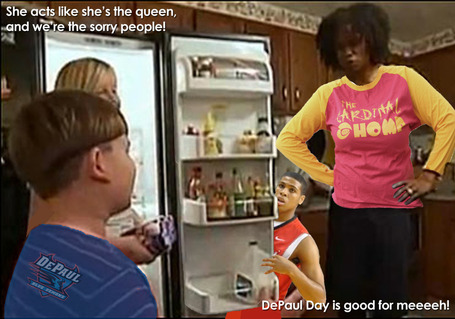 Earl you be killin' 'em.

"I just try to come in and get as much work done as I can; after practice, before practice to try to stay ready," he explained.

Prior to every contest, he also arrives early so he can check out the defensive assignments and rotations that are posted in the team's locker room.

"If I don't know those," Clark explained. "(Magic Head Coach) Stan (Van Gundy) will have my (rear end)."

Kenny Klein tweeted yesterday that Louisville fans headed to Chicago should know that they will not be permitted to bring noisemakers of any kind into the arena.

It's D2, bro. You can't train this. DePaul Day II is like Siegfried and Roy's bengal. You think it's trained, and then it'll bite your f---ing face off. In front of a crowd, baby.

This is the worst advertisment for season tickets I've ever seen.

Could not be more DePaul.

Great story on Wayne Blackshear (and his mom) from C.L. Brown.

He spends little time feeling sorry for himself because his mother never wasted any time doing so. When his father was shot to death when Wayne was about 4, Carol Blackshear made it a point to exude only strength in front of her children.

"I didn't show my children any weakness, meaning I didn't cry in front of them if I had a breaking- down moment," she said. "I tried to carry on as normal, given the fact I know what they suffered through, but I tried to make every day fun for them. I was always planning different events, a family function, something to keep them upbeat, because it was too painful for me to talk about their dad."

Also, the title of the story is "Louisville basketball's Wayne Blackshear grounded, well-rounded."

As I type this, the Louisville baseball team's season-opener against Minnesota is in a rain delay in the top of the 9th. The Cards trail the Golden Gophers 7-3. 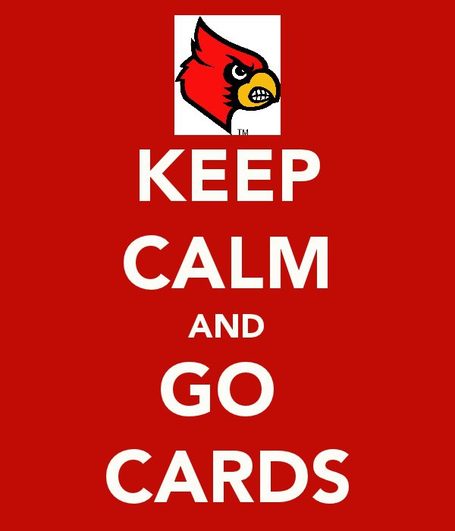 I'm more of a "Flip The F--k Out At The Drop Of A Hat And Go Cards" kind of guy myself, but that's just me.

ESPN's Andrea Adelson has Louisville and Teddy Bridgeater at No. 3 in her postseason Big East quarterback rankings.

3. Louisville. True freshman Teddy Bridgewater really helped anchor this team once he replaced Will Stein in the starting lineup. He set a school freshman passing record with 2,129 yards and won Big East Newcomer of the Year honors. Without Bridgewater, I'm not sure this team wins a share of the Big East title. He showed poise and maturity beyond his years. Preseason ranking: 7.

It's because we never have enough guys with beards in attendance.

And finally, here's your Louisville vs. DePaul tale of the tape from Stat Sheet.